In the top three. The VI International Naval Salon is over 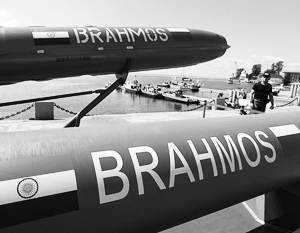 The International Naval Salon in St. Petersburg showed serious demand from the enterprises of the maritime industry and the high status of the event. In the last days of work, the details of the BrahMos supersonic missile project and the dates for adopting the Borey-type nuclear submarines into service with the Russian Navy have become known.


Ended VI International Naval Salon in St. Petersburg, which opened on Wednesday. He has already firmly taken place in the top three of the world exhibitions of naval armaments and military equipment.

According to Mikhail Zolotarev, Director General of Marine Salon CJSC, this year the event was attended by 457 enterprises from 31 countries of the world. In total, in the demonstration section at the berths of the Maritime Station and in the water area, 36 ships, boats and vessels from the Naval fleet, The Border Service of the FSB of Russia and enterprises - participants of the salon. However, the next salon will be held in Shushary, where the expositions and stands of enterprises will be located. But the ships will be located in the Neva.
Will start soon

Details of the project of the Russian-Indian supersonic BrahMos rocket became known at the cabin. It is designed to destroy a wide range of naval targets, characterized by high range (up to 290 km), high supersonic speed (up to 2,8 m), powerful combat load (up to 250 kg), and low visibility for radars. In practice, the rocket implements the principle of “shot - forget” - it finds the goal itself. According to experts, there are no analogues of such a rocket that would have a supersonic speed and a similar range of flight.

In 2014, the first test launch of the aviation version of this missile from the board of the Indian Su-30MKI is planned. According to the executive director of the BrahMos Aerospace Company from the Russian side, Alexander Maksichev, now in India there is a revision of two Su-30MKI fighter jets for a rocket, in parallel the adaptation of the rocket itself to the aircraft is being completed.

According to the head of BrahMos Aerospace, Sivathana Pillay, the planes underwent some improvement in order to provide the possibility of installing a new missile under the fuselage and its integration with the fire control system. In addition, the fighter wing was reinforced.

Dimensional mass models of the BrahMos missile have already been manufactured and shipped to India. Also made equipment pre-launch preparation and launch. This year, the first flight of the Su-30MKI will be carried out with an overall weight model of the rocket.

The air-based BrahMos rocket will differ slightly from the other versions, since the Su-30MKI platform itself operates at supersonic speeds, and thus eliminating the need to accelerate the rocket to a similar speed. “The corresponding speed will be ensured by a rocket engine of smaller mass and a modernized nose fairing, and the additional stabilizer will provide stability during the flight,” Pillay said.

According to Maxichev, the BrahMos rocket is not completely offended by orders. According to him, contracts have already been signed for the supply of a little less than a thousand supersonic missiles. However, so far this rocket has not been delivered to third countries.

“We still offer our rocket to third countries. This is a long procedure, we are conducting active marketing, a number of states have an interest, but there have not been any real supplies, ”said Maksichev.

Meanwhile, India may put forward a demand from Russia to acquire the BrahMos supersonic missiles to arm the ships of the Russian Navy if a decision is made to build the third series of 11356 frigates for the Indian Navy, ITAR-TASS told Sivatkhan Pillay.

As naval experts explain, at present, any export contract for the supply of military products is accompanied by an offset, in which the exporting country undertakes to spend certain funds on high technologies determined by the importing country. It is possible that the Indian side may request to purchase BrahMos missiles produced by BrahMos Aerospace as part of the offset. Moreover, the BrahMos family of missiles includes both anti-ship missiles and cruise missiles for attacking ground targets.

“Russia is currently building six modernized 11356 frigates for the Black Sea Fleet, similar to those in service with the Indian Navy. The BrahMos attack missile system is ideal for these ships and could be installed on them during construction, ”Pelley noted.

To date, India has acquired six frigates of the 11356 project in two series from Russia. The first three frigates were equipped with the Russian Club missile strike complex, and the second three with the Russian-Indian BrahMos attack missile complex.

Russian shipbuilders fulfilled their obligations under the contract for the construction of the first Mistral-type helicopter carrier for the needs of the Russian Navy, reported to the United Shipbuilding Corporation (USC).

The aft part of the helicopter landing ship docking ship Vladivostok of the Mistral type has already been sent to France. After 17 days, the feed should arrive at St. Nazaire, to the site of the final construction of the ship "Vladivostok". The entire helicopter carrier will be launched on October 2013 of the year. After this, the ship will be delivered to Russia again and after the additional equipment in accordance with the requirements of the Russian Navy will be transferred to the fleet in the autumn of 2014. At the Baltic plant already laid housing DVKD-2 "Sevastopol". Meanwhile, Russia can offer France also the delivery of Ka-52K Alligator helicopters for equipping the third and fourth Mistral helicopter carriers. At the same time, the helicopter itself is still being created - “the marine modification of the Alligator will appear only in 2014, and must be re-tested,” said the general director of the Kamov company, Sergey Mikheev.

“In the case of the purchase by Russia of the third and fourth ships of this type, it will be possible to raise the question that the purchase of the French Navy for the Mistral and Tonnere Russian Ka-52K Alligator helicopters was part of the offset,” said Mikhail Barabanov, deputy director of the Strategy and Technology Analysis Center. Interfax reports. According to him, the "Alligator" will significantly increase the combat potential of the ships, and therefore export opportunities.

The Ka-52 "Alligator", on the basis of which the naval version of the Ka-52K combat helicopter is being created, was just presented at the International Navy Salon in St. Petersburg by the Russian Helicopters holding.

It is assumed that the Ka-52K in the future will be the basic model of the helicopter for the Navy.

The sub is almost ready.

It became known on the eve that the nuclear-powered missile strategic submarine “Alexander Nevsky” of the 955 “Borey” project will be transferred to the Russian Navy on November 15. The general director of Severodvinsk “Sevmash” (part of the USC), Mikhail Budnichenko, spoke about this at the exhibition.

“July cruiser 5 made the second exit according to the state tests method. Then he will return to Severodvinsk, where a number of technological operations will be performed. Approximately in September there will be practical work by the Bulava. Then a number of technological operations, such as the final finishing, revision of mechanisms, and the naval flag should be raised on it on November 15, ”he said.

As Budnichenko specified, the second serial “Borey”, that is, the third one - “Vladimir Monomakh” - is currently completing mooring trials. Immediately after the Fleet Day - 29 July - the ship will make an exit to factory trials in the White Sea. Factory running state tests are planned to be completed on December 12, and December 25 – 27 - to transfer it to the Russian Navy, Interfax reports.

In addition, work continues on Prince Vladimir, which was laid last year. Recall that the fourth-generation 955 class Borey-class submarines are armed with the new Bulava missile system. Each submarine can carry X-NUMX intercontinental ballistic solid-fuel missiles R-16 "Bulava" with a range of more than 30 thousand km, equipped with re-divided head units of individual guidance.

Sevmash is actively working on the construction of seven multi-purpose nuclear submarines of the Yasen type, the first of which, Severodvinsk, should be handed over to the Russian 25 fleet this December, Budnichenko noted. All seven boats must pass up to the 2020 year. With regard to the following boats of the project "Ash", then on July 26 will be laying the submarine "Novosibirsk", which under the contract should be commissioned in 2015 year. According to him, “there are no problems with financing today, although large credit schemes are used, that is, we receive money in the middle of the year”.

Russia returned to the project of the floating nuclear power plant Akademik Lomonosov, which is being built at the Baltic Shipyard in St. Petersburg.

"We have a four-year contract, we have to pass it in September 2016 of the year," said the general director of the company, Alexander Voznesensky. “For almost two years there has been almost no work,” admitted Voznesensky. - Now there is a period of adaptation: we buy equipment, materials. Installation of equipment that has not been previously installed. We contract for the remainder of the equipment that we have to contract. We will be installing reactors soon. ”

The contract for the completion of the floating power unit of the FNPP was concluded by the Baltic Plant and the Rosenergoatom Concern in December 2012.
According to Voznesensky, the plant also builds a nuclear-powered icebreaker of the 22220 project with a capacity of 60 megawatts for Atomflot and a diesel-electric icebreaker Viktor Chernomyrdin with a capacity of 25 megawatts for Rosmorport. This icebreaker was laid in October 2012 of the year and should be handed over to the customer in 2015 year.