Syrian President receives guests from Algeria, while terrorists are waiting for weapons from Riyadh 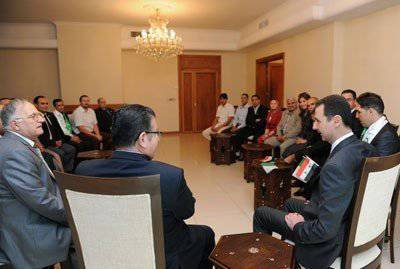 Bashar Al-Assad: Inter-Arab Solidarity Will Protect the Interests of the Region


At a time when the governments of many Arab countries obediently carry out the will of Washington, breaking off relations with Syria, joining sanctions against it, silencing the crimes of terrorists, hosting the so-called "Friends of Syria", and even openly supporting bandits weapons- Arab people are increasingly talking about solidarity with the fraternal country, which today is one of the most decisive in resisting the new colonialism.

These days, a friendly delegation from Algeria has arrived in Damascus, consisting of scholars, intellectuals, journalists, public figures and politicians.

Although Algeria’s position is not anti-Syrian, unlike other members of the Arab League, the authorities of this country are not ready to openly challenge those who incite the war in the SAR, trying to divide the entire region and turn it into a blazing, blood-drenched land. The leadership of Algeria, which itself suffered from terrorism in the 90 of the last century, lacks the courage and determination to oppose anti-Syrian decisions, but Algeria always abstains from voting.

In this country there were courageous people who came to Damascus to openly demonstrate their support for the brotherly people.
The delegation was received by Syrian President Bashar Al-Assad. A rather warm conversation and exchange of opinions took place between them.

The head of state said that the arrival of representatives of the fraternal Algerian people, their solidarity with Syria proves that the Arab peoples deeply understand the essence of what is happening. According to him, inter-Arab solidarity has always helped protect the interests of the region and all its peoples.
He thanked the Algerian guests for their courageous position and expressed confidence that they would continue to defend the dignity of the peoples and resist colonialism and terrorism, no matter how difficult the international conditions were.

The delegation members also met with the head of government, Wajl Al-Khalki, the supreme mufti of the Republic, Ahmad Badr-ed-Din Hassoun, the head of the SAR People’s Council Muhammad Al-Lyahham and other responsible leaders.

In particular, Al-Liahham at the meeting with delegates also reaffirmed the importance of cooperation between the peoples of the two countries. Especially, he stressed, this is necessary in the conditions when the Arab League became a puppet of the colonial forces and reactionary Gulf monarchies. He also pointed out that both countries once fought against French colonialism, and this makes them related.

The speaker of the Syrian parliament proposed to strengthen cooperation between the legislative bodies of the SAR and Algeria. He also appealed to the guests with a request to tell the truth about Algerian citizens in Syria, especially in conditions when Syrian TV channels were disconnected from the Arab League with Arabic satellites.

“The so-called“ Arab Spring ”has not brought anything to the region, except murder, terrorism and destruction. This is very clearly manifested in Egypt, Tunisia and Libya, ”said one Algerian who arrived in Syria.

This is not the first international delegation arriving in Syria. No matter how hard the enemies try to isolate the country, they don’t succeed. There are always courageous people who are ready to break through the information and political blockade around the SAR.

The terrorists attacked the bus

Currently in Homs is a major anti-terrorist operation. It should be clarified that, in contrast to the “information” issued by some supposedly “handshaking” media, 80% of the city has long been controlled by the army. In many areas, the hands of the bandits did not reach at all, and there - absolutely normal life, as in millions of cities. In the hands of the militants is only a few blocks, mainly in the area of ​​the Old City. This status quo persisted for a long time, but at present the Syrian army has launched an attack against the gangsters entrenched there. Al-Khaldiya, which had been in the hands of criminals for many months, was trimmed. They are fighting in the neighborhoods of Bab-Hood, Al-Karabis. The situation is complicated by the fact that the brutal "opposition" use civilians as human shields.

The loss-bearing and defeating militants, as is their characteristic, are recouped by the local population. Near the town of Homs between the villages of Qasr An-Naimi and Tel Al-Amari passed an ordinary passenger bus with civilians. The bandits attacked this bus, killing one passenger and injuring several other people.

Terrorists are failing in the province of Aleppo. Particularly fierce fighting turned around for the prison building, which the militants wish to use as their fortified base, and for the Ming airfield. Dozens of times the "opposition" attacked these objects - and each time they were forced to retreat, suffering heavy losses.

It is necessary to clarify that in Aleppo, more than 90% of the armed formations are those that belong to the most radical Dzhebhat An-Nusra organization, which is closely associated with Al-Qaeda. If, for example, in the same Homs and his provinces, it is still possible to talk about the so-called “Syrian Free Army” and about the participation of deceived Syrians in terrorist groups, then near Aleppo you don’t even have to think about it. From the very beginning of the crisis, the inhabitants of Aleppo did not support the rebels - in this rich city, which was the breadbasket of the country, there was no social base for protest sentiments. There were, however, some marginals in the villages of the province who were involved in the "opposition", promising money and playing on the feeling of envy of the city. Of these, some detachments of the “Syrian Free Army” were formed, but they could not do anything with the city of Aleppo until a gang of well-trained mercenaries from “Dzhebhat-An-Nusra” rushed from the Turkish border. A few months ago, conflicts were constantly erupting in the provinces between these radical Al-Qaeda Islamists and local petty gangsters from the so-called SSA, who, of course, were losing to the radicals. Now we can talk about the almost complete victory in this competitive struggle of the very dark forces, extremists who have nothing to do with the Syrians. The naive provincial fools who believed in the "bright ideals of the revolution" were "devoured" by the experienced "wolves" prepared by the instructors of the NATO countries in Turkey.

In the province of Aleppo, there are two villages that are “bone in the throat” for the Islamists, because they can not be captured. This is Nubl and Zahra. Hired gangsters keep them under siege, not even letting teachers go there. Thus, a helicopter was recently shot down, carrying seven teachers flying to students from these villages.

But the tragedy with the teachers of terrorists is not enough. 7 July they tried to seize these settlements. Everybody fought against the bandits - soldiers, policemen and local residents. Once again, the perfidious attack managed to repel. Two small villages have been enduring both the blockade and the storming of terrorists for a long time. The media are silent about the heroism of their inhabitants. For them, there is only imaginary "heroism" of imaginary "rebels" who in fact can fight only with superior forces and foreign weapons, hide behind the backs of civilians and attack passenger buses and peaceful houses.

At this time, the so-called “Syrian opposition” abroad acquired a new leader in exchange for Muaz Al-Khatib, who behaved like a capricious young lady, then resigning, then disavowing her own resignation, then leaving again.

This new "main revolutionary in exile" was a certain Ahmad Al-Zhabra. The protege of Saudi Arabia, who is a relative of one of the wives of the Saudi king, isn’t he, a magnificent spokesman for the interests of the Syrian people? He won the hard-fought battle of the protege of Qatar by a certain Mustafa Sabbah.

This Zhabra immediately made two statements, contradictory in their essence - one “hawkish”, the other - “pigeon”.

The first is that the Syrian "opposition" abroad does not intend to take part in the planned international conference on Syria "Geneva-2". At least, until this “opposition” increases military power. Al-Zhabra intends to increase it ... of course, with the help of Saudi Arabia, which promised to supply the militants with a new weapon.

The second statement is about a truce with the legitimate Army during the Muslim holy month of Ramadan. Ostensibly - for humanitarian reasons. A kind gesture of goodwill.

Just need to remember previous attempts at a truce. The first of these was at the end of 2011, when an Arab League observer mission worked in the country. The second is in the spring of 2012, when the mission of the UN observers began its work. The third is in the autumn of 2012, during the 4 of the Muslim Day holiday Eid al-Adha. Every time the truce was broken by the rebels!

And, if one compares the two contradictory statements of Al-Zhabra, one thing becomes clear: the terrorists do not intend to observe any truce. They just want to use the words about peace and humanism for their own purposes: to wait for the weapons they hope to get from Saudi Arabia.

And someone else has doubts that this pseudo-revolution has something to do with the Syrian people?

Ctrl Enter
Noticed oshЫbku Highlight text and press. Ctrl + Enter
We are
Bashar al-Assad: In Syria, not the “revolution” that the enemies are talking about, but the revolution of the army and the people against terroristsSyria: Americans scare themselves, and Asma Asad buys chairs
16 comments
Information
Dear reader, to leave comments on the publication, you must to register.