The Russian army will replenish recruits all year round 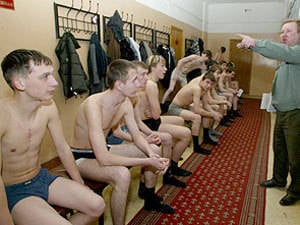 Recruits in the Russian army will call for almost the entire year. The bill, which changes the timing of the recruiting campaign, entered the State Duma last Friday. According to the document, conscription to the troops will be carried out almost the whole spring (in April-May) and summer (June, July, August), as well as in the fall (October-November) and in the winter (December). In this regard, it will be more difficult to evade military service. About this writes "Nezavisimaya Gazeta". According to the publication, the bill will be considered by parliamentarians and signed by President Medvedev before 1 in April of this year, that is, before the start of the spring draft.

The newspaper also notes that difficulties awaiting the soldiers, called up in the spring: the terms of dismissal can last up to five months, and the service time for many military men of military service can be not 12 months, but almost a year and a half.

The draft federal law “On Amendments to Article 25 of the Federal Law“ On Military Duty and Military Service ”was initiated by United Russia deputies Viktor Zavarzin, Mikhail Babich and Yury Savenko. The parliamentarians propose to extend the spring conscription to 31 in August and reduce the fall by one month, that is, to call up new recruits to the troops not from 1 in October, but from 1 in November to 31 in December. The government has already approved the proposals of the military deputies lobby, said NG, referring to the official review of the bill, signed last week by the head of the government apparatus, Vyacheslav Volodin.
Meanwhile, Volodin proposed to leave unchanged the term of the autumn call-up of citizens of the Russian Federation for military service, "as it is difficult to hold events related to ensuring the attendance of citizens of the Russian Federation evading conscription for military service within two months." Most of the party in power for such an amendment will certainly heed. So, except for two months of winter and one month of spring, conscription to the troops will be carried out almost year-round, the newspaper writes.

According to the initiators of the bill, the document will increase the number of trained sergeants and professional soldiers in 1,5 times, which will lead to "increased combat readiness." It is worth noting that the amendments have not yet been considered, but almost all training units, military units and centers in the army have already switched to an accelerated three-month training of sergeants and specialists for the troops.

Former Commander of the Black Sea fleet, the deputy from the Communist Party faction Vladimir Komoyedov believes that in three months "it is impossible to train a competent specialist, let alone a sergeant, who, in addition to knowledge of the military specialty, must train and command personnel." “In civilized armies of the world, at least one to two years are allotted for the training of such specialists,” said Komoyedov.

According to the admiral, "to appoint a young, not fired" sparrow "after three months of training as a sergeant in the army is a profanation of the country's military organization."

This point of view is shared by the chairman of the Central Committee of the All-Russian Professional Union of Military Personnel, captain of 1 rank Oleg Shvedkov. He is convinced that sooner or later "our leaders will come to understand that a soldier and a call sergeant must serve in the army and the navy for at least two years."

Member of the Presidium of the Public Council under the Ministry of Defense, Chairman of the Union of Soldiers ’Mothers Committees of Russia Valentina Melnikova, in turn, believes that the law initiated by United Russia is associated with a shortage of conscripts and is aimed at toughening by local authorities of measures to capture young men and send them forcibly to military service ".

The human rights activist is convinced: “if the call is extended by December 31, then no schoolchild will go to a higher educational institution according to the results of the USE”.