July 8 2013
92
Political hurricane "Snowden" is gaining momentum. Amazingly, the States themselves inflate it, acting like an elephant in a china shop. One can not remember: who God wants to punish - deprives the mind. Today, He deprived the mind of the States, and they twitch, making one blooper after another. 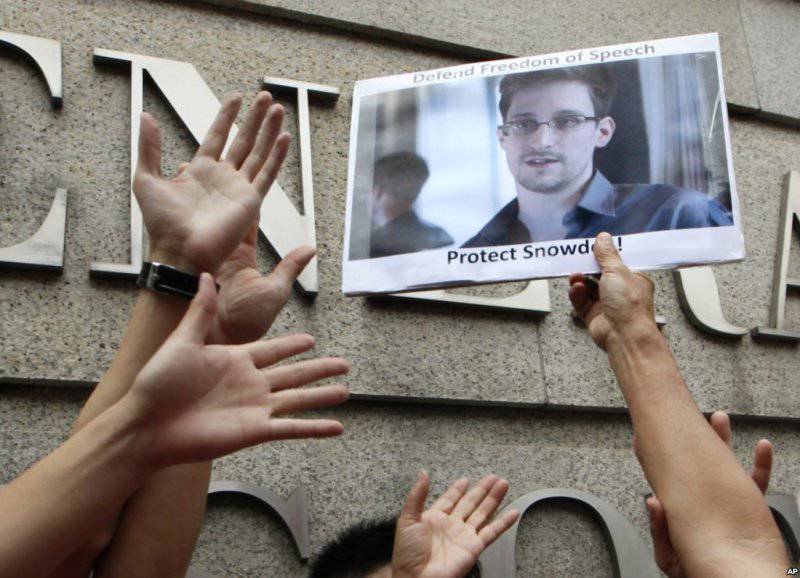 Forced landing of the aircraft of the President of Bolivia in Austria, and then searching the plane in search of Snowden - this is another great failure, this time not only the secret services, but also the American leadership, pushing through this act of international poaching. “The Spy Snowden” was not found, but they confirmed their illegibility in the media, not being ashamed of dirty methods even in diplomatic relations. Along the way, the European allies were lowered to colonial status: Europe lost both honor and dignity ...

Edward Snowden is not a spy, he did not work for foreign intelligence, and he did not reveal any terrible secrets; he just made it clear what everyone guessed.

This is a classic exposer of the criminal actions of the government, by the way, by definition of the European Parliament, which established in its time that persons who sincerely denounce the illegal actions of their governments, even in violation of their official duties, should receive protection. Snowden exposed the criminal actions of the United States and against Europe, listening to the EU leadership. But he did not receive protection from Europe, and thereby exposed the European lie about “human rights”.

The American agitprop will, of course, continue to lie to its people that Snowden is a spy and a traitor, but this cannot be done infinitely long, and you cannot throw a scarf over the whole world: the global violation of US human rights has become a fact of world politics. As a result weapon "Human rights" are knocked out of American hands, so effective and cheap.

But it is important not to let him rise again, in fact, the situation is not simple: the brute armed to the teeth became a laughing stock in the eyes of the whole world! And laughter kills the mind first ...

But the mind has not left the American society, it remembers the words of President A. Lincoln: "Those who refuse freedom for security are not worthy of one or the other." He did not leave the Europeans either: the head of the European Parliament, Schulz, wonders why the United States behaves towards us as enemies. After all, the United States violated all diplomatic conventions in respect of its European allies ...

Snowden's revelations are widely discussed in Western public opinion, and for many he is a hero! A fighter for real American ideals, an idealist who opposed the invasion of privacy. We must support this alternative West, and at the same time we will see how our human rights defenders will defend Snowden.

This suggests, of course, and analogies. Hurricane "Snowden" is very similar to another hurricane, named "Solzhenitsyn", which once attacked the USSR with exposing materials from the "GULAG Archipelago", the destruction of the Soviet superpower began with it. The word destroys not only cities, but also empires ... However, that hurricane gained destructive power because it supported it and fanned the West in every possible way.

Global electronic surveillance, the NSA-CIA matrix, thrown over the whole world today, is the American equivalent of the GULAG. And we need to talk loudly about it, supporting Snowden, as the United States once supported Solzhenitsyn. It's time for us to pay off old debts ...

At this time, B. Obama declares the United States "a global advocate of peace and freedom, a ray of hope for all people" - this is another analogy with the insane speeches of the CPSU general secretaries on the worldhistorical communism missions! Freedom to the American people, caught in the matrix of the NSA-CIA!

Ctrl Enter
Noticed oshЫbku Highlight text and press. Ctrl + Enter
We are
Bolivian Armed Forces. How a country protects itself in the AndesGoogle Earth - a military secrets debater
92 comments
Information
Dear reader, to leave comments on the publication, you must to register.