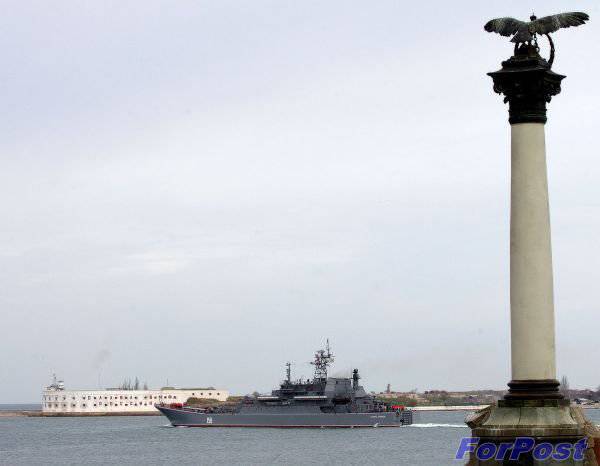 On July 6, a large landing ship (BDK) of the Black Sea arrived in the Bulgarian port of Varna for more than a year of repair fleet "Caesar Kunikov" under the command of Captain 2nd Rank Roman Kotlyarov.

This event is significant because this year the President of Russia decided to ban the repair of Russian Navy ships outside the country. But an exception was made for Caesar Kunikov, since his almost two-year repair plan was laid out earlier and he had to go to Bulgaria for repairs in March 2013 of the year.

The task of towing the BDK to the place of repair was successfully completed by the crew of the sea tug MB-173. Towing in the Black Sea poses no particular difficulty. But the raid of Varna, where there are many ships and the passage to the quay wall of the plant to overcome the narrows - not an easy task. The crew of the MB-173 under the command of Sergey Plakushchenko coped with the task. And then say, Sergey Pavlovich captain on this sea tug from 1996 year. Experience it does not hold. The return of MB-173 to Sevastopol is scheduled for July 7. But the repair of "Caesar Kunikova" planned until the autumn of next year.

Ctrl Enter
Noticed oshЫbku Highlight text and press. Ctrl + Enter
We are
BDK "Caesar Kunikov" returned to Sevastopol after repairRepair of the Russian Caesar Kunikov BDK completed in Varna
14 comments
Information
Dear reader, to leave comments on the publication, you must to register.