The predecessors of the tank "Armata" 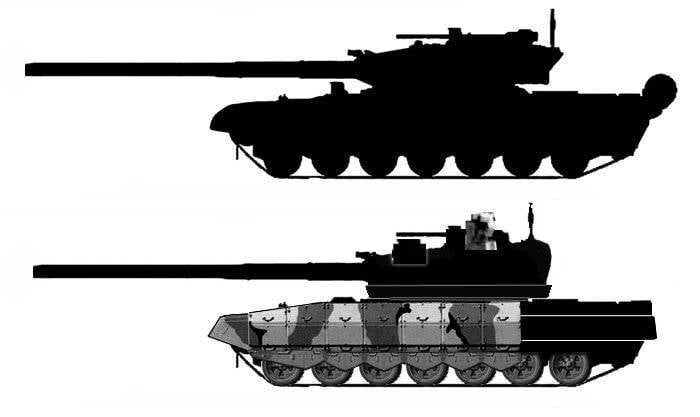 In this regard, in 1980, the Kharkov Engineering Design Bureau (KMDB) was entrusted with the development of a promising tank - the 477 object under the title “Boxer”, subsequently “Molot”. The layout of the tank corresponded to the design solution proposed as early as 1972 by KMDB chief designer A.A. Morozov.

As a result, the design of a promising tank was innovative: the installation of weapons on a gun carriage, a running gear with seven rollers, the placement of the entire crew in the hull, a revolver-type automatic loader with a horizontal arrangement of shots, a regular active defense system with the possibility of intercepting caliber artillery shells. In 1980, the caliber of the gun increased to 152 mm. The weight of the tank was 50 tons with the possibility of increasing in perspective. A two-stroke boxer diesel engine, a four-stroke X-shaped diesel engine or a GTE with power up to 1600 hp were considered as a power plant.

The layout of the hull included a fore fuel tank, a central control / combat compartment with crew positions and automatic loader, and aft engine and transport compartment. In the final form, a turret was included in the tank structure to protect the shots while they were being poured from the automatic loader into the gun barrel, as well as to accommodate television and radar surveillance and aiming equipment.

The crew was considered in two versions - from two and three people. In connection with the failure to develop a tank information and control system with the required set of functions, the last option was implemented in the prototype tank. Television observation devices located on the tower were duplicated by optical devices located in the building on either side of the tower. 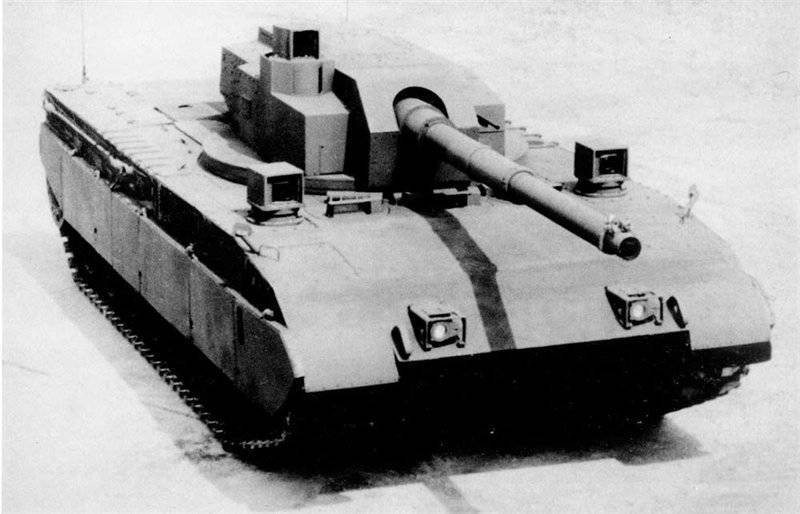 In the same period, the United States began to develop its promising main battle tank, not inferior in its characteristics to the 477 "Boxer / Hammer". The hull, chassis and powerplant of the M1 Abrams tank were chosen as the platform for creating the new tank. The project was named ASM Block III.

For the first time in the practice of American tank building, a carousel with a vertical arrangement of shots was placed in the tank hull. The armament was used remotely controlled smoothbore 140-mm gun mounted on a gun carriage in the tower of minimum dimensions. The crew of the three-person tank was located in the hull. For the first time in the world practice of tank building, the department of control was separated by an armored partition from the department of management in order to create armored capsules for the crew. Television surveillance devices were located in the tower, optical surveillance devices - in the case. 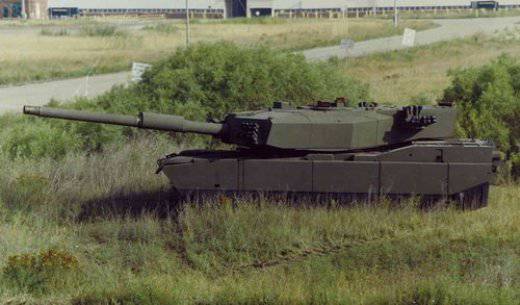 The prototypes of the ASM Block III tank were successfully tested in the 1983 year, but were not put into service for the following reasons:
- the absence at that time of a tank with similar combat characteristics of potential adversaries (USSR and China);
- the unreliability of television surveillance devices;
- the absence of a circular review of the tank commander in the event of failure of television surveillance devices;
- the ability to install 140-mm guns in the standard tower serial tank M1 Abrams, subject to its refinement, while maintaining the number of crew of four people.

In the USSR, the 477 “Boxer / Hammer” object until 1988 was considered the only contender for the role of the main battle tank. However, in the course of perennial development and testing, the design flaws of its technical solution became clear, first of all, the inoperability of the complicated kinematic loading scheme: three revolving automatic loaders, kinematically connected with each other, were by definition an order of magnitude more unreliable than a single carousel. Over the entire period of development of the tank, the number of shots made on numerous tests, could not exceed a single value.
The level of protection of the crew of the Boxer / Hammer, located in the integrated control unit / combat compartment, was much lower than in the M1 Abrams armored capsule. In addition, the Soviet experimental tank had the same technical flaws in terms of television surveillance devices.

In connection with the withdrawal of Ukraine from the Soviet Union in 1991, the “Boxer / Hammer” project was completed, the development of new tanks was carried out only in the designated design offices. Ukraine also refused to continue the project unilaterally due to the lack of qualified specialists in the development of large-caliber guns, automatic loaders, automated control systems and thermal imaging surveillance devices. 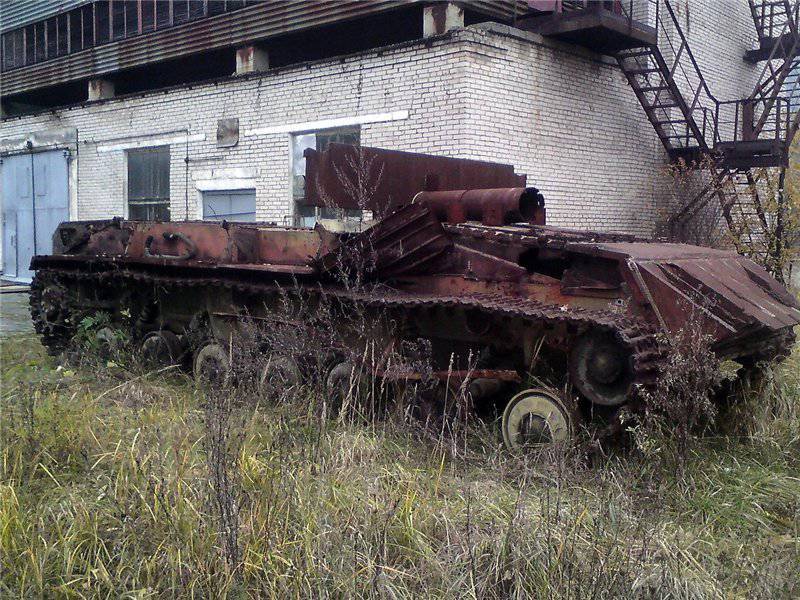 All Russian versions of the promising tank had a chassis of seven pairs of road wheels and a combat weight of about 50 tons, as well as a smooth-bore 152-mm 2А83 gun developed by Yekaterinburg Plant No. 9. The 16-cylinder 2В-16-2 1600 hp XNUMX-cylinder diesel engine was considered as the main variant of the power plant. Chelyabinsk State Design Bureau Transdizel. On the latest versions of the experimental tanks, modern thermal imagers were installed instead of television observation devices.

As shots for the 152-mm cannon, armor-piercing feathered sub-caliber projectiles Grifel-1 and Grifel-2, as well as high-explosive fragmentation projectile Grifel-3 developed by the Moscow Scientific-Research Institute were used. 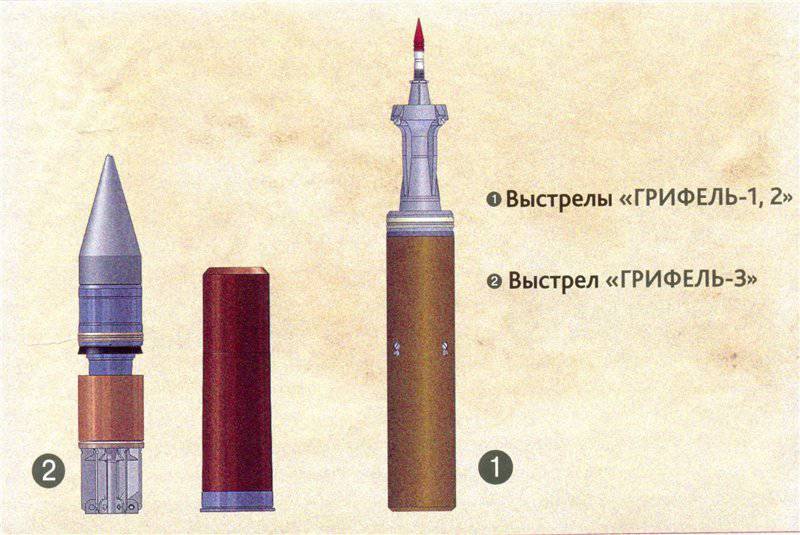 St. Petersburg OKBT, transformed into OJSC “Special Design Bureau of Transport Engineering” (“Spetsmash”), for a promising tank under the code “Object 299” (provisional name “Leader 2000-2005”) chose a shell layout used in self-propelled artillery installations, with accommodation engine compartment in the bow of the hull, combat compartment - in the stern. The remote-controlled gun was installed in the stern on a raised carriage. Under the gun there was a carousel automatic loader with a vertical arrangement of shots of increased length. The crew was located in the armored capsule of the control compartment between the engine-transmission compartment and the uninhabited fighting compartment.

Omsk KBTM has developed a promising tank under the code "Object 640" (code name "Black Eagle") of the classic layout with a habitable fighting compartment and placing the gun in the tower. For the first time in the practice of domestic tank building, an automatic conveyor loader was removed from the hull and placed in the aft niche of the tower. The niche consisted of a removable armored container, equipped with expelling panels.

Nizhny Tagil UKBTM for its version of the promising tank under the code "Object 195" (code name "T-95") used the layout of the hull, previously used in an experienced American tank ASM Block III - the front armored crew capsule, the central uninhabited fighting compartment, aft engine-transmission branch, as well as a carousel automatic loader with a vertical arrangement of shots. Unlike the American tank, a full-size turret was used in the construction of the 195 object, the internal volume of which allowed the observation and aiming equipment, as well as radars and launchers of the active protection complex. In addition, in spite of not being uninhabitable, the tower retained a significant amount of free internal volume to ensure loading of shots into the automatic loading and maintenance and repair of equipment of the fighting compartment. 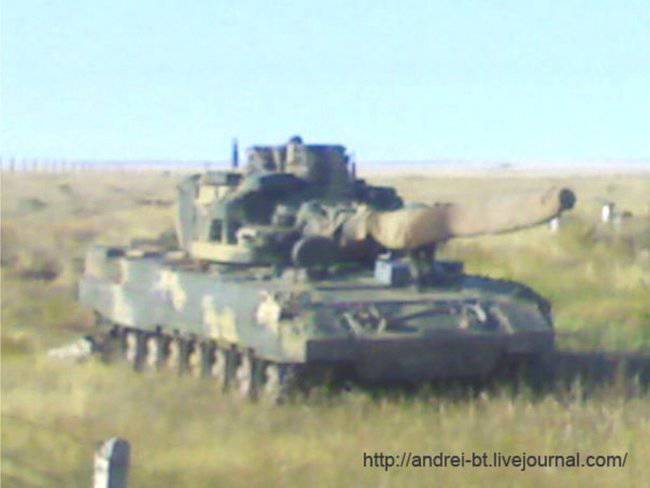 According to the test results, the development of 299 and 640 objects was prematurely stopped due to unrecoverable design flaws in their layout schemes - in the first case, it was thermal interference made to the operation of the aiming system by the engine-transmission compartment, in the second case it was weakened booking of the aft niche.

The development of the 195 object continued until the 2010 year, when the new smoothbore 125-mm 2A82 gun with an elongated barrel and an enlarged charging chamber, whose muzzle energy was at the level of the best Western samples, was at the disposal of domestic tank builders. The dimensions of the gun and carousel loader allow you to place the entire complex in the turret and hull of the serial T-90 tank.

In this regard, in 2011, OAO Uralvagonzavod prepared a proposal, and in 2012, the Russian Ministry of Defense approved the project under the title of Armat to develop a new Russian advanced tank and armored platform based on it. The new tank retained the chassis T-90 of six pairs of road wheels, 125-mm cannon and automatic carousel loader. The body of "Almaty" consists of an armored office management, uninhabited fighting compartment and the engine-transmission compartment. A twelve-cylinder X-shaped diesel engine with an HP 1200 power is used as a power plant. The crew size is planned from two to three people, depending on the degree of automation of work on aiming a tank gun.

The Armata project put an end to more than a 30-year-old epic of attempts to create domestic and foreign tanks equipped with large-caliber guns. However, it can be expected that the military-technical competition between the largest tank-building powers will be continued similarly to the situation of the 1980 of the year, but already on a new scientific and technical base. At least for the time being, the US Army TRADOC has been tasked with preparing, by the end of 2013, the concept of creating an airmobile tank with a transport weight within 36 tons (standard 40-foot container) to support the actions of the expeditionary rapid deployment forces.

Ctrl Enter
Noticed oshЫbku Highlight text and press. Ctrl + Enter
We are
The project of the main tank "Object 477"Modernization tank LEOPARD 2: the game and the players
Military Reviewin Yandex News
Military Reviewin Google News
126 comments
Information
Dear reader, to leave comments on the publication, you must to register.