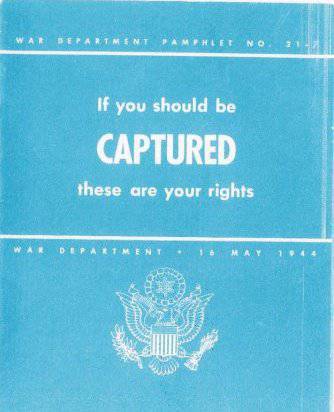 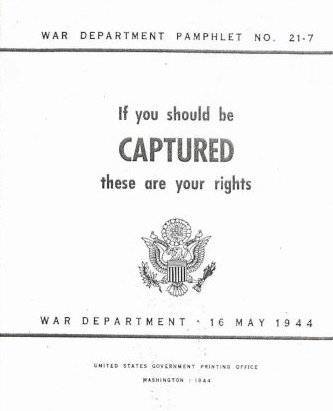 If you
Will fall in captivity
here are your rights

The purpose of this booklet is to familiarize you with some of the rights of a prisoner of war. Knowing them can help to survive what is happening is less difficult and humiliating, if you still do not get lucky and you will be captured by the enemy.

And remember this: The United States treats prisoners according to rules. You have the right to demand that the captive do the same.

Military Department Pamphlet No. 21-7. “If you are captured, here are your rights” published for information and instruction of all concerned.
{AG 383.6 (21 Mar 44)}
By order of the Secretary of War: 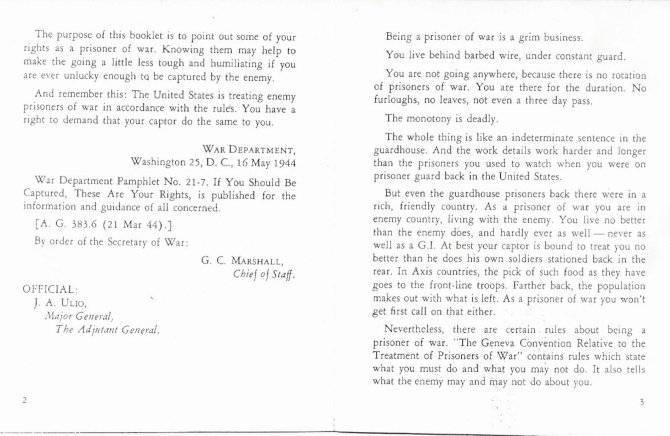 Bad to be a prisoner of war.

You live behind barbed wire, under constant guard.

You can not move freely, because the prisoner does not come change. You are there for a long time.
Terrible monotony.

Everything resembles a guardhouse with an indefinite sentence. Everything happens harder and longer than the prisoners you once saw being a guard in the United States.

However, even in the guardhouse prisoners remained in a rich, friendly country. As a prisoner of war you are in an enemy country, living with the enemy. You do not live better than the enemy, and is hardly as good as the American soldier. If you're lucky, your invader will treat you no better than his rear soldiers. In the Axis countries, all food goes mostly to the front line. In the rear, the population eats what remains. As a prisoner of war you do not have to rely on either.

However, there are certain rules about prisoners of war. “The Geneva Convention in the Treatment of Prisoners of War” contains rules that state what you should do and what you can not do. She also says that the enemy can and cannot do with you. 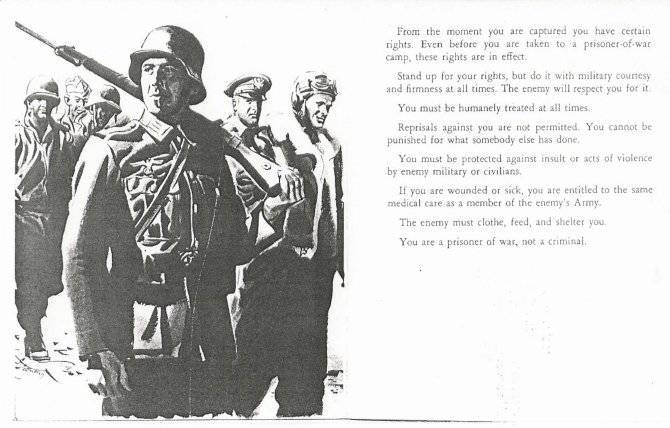 From the moment you are captured you have certain rights. Even before you were taken to a prisoner of war camp, these rights apply.

Defend your rights, but always do it with military courtesy and firmness. The enemy will respect you for it.

You are always required to treat humanely.

Illegal punishments are not permitted against you. You cannot be punished for what someone else did.

You must be protected from insults or acts of violence by military or civilians of the enemy.

If you are injured or sick, you are entitled to the same medical care as an army member of the enemy.

The enemy is obliged to dress, feed and provide you with shelter.

You are a prisoner of war, not a criminal. 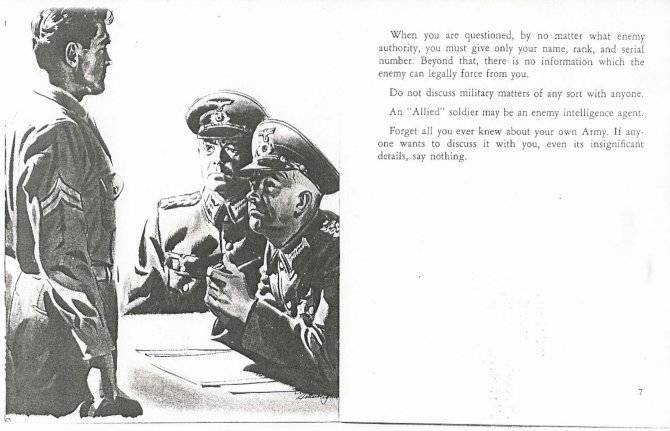 During the interrogation, regardless of the position of the enemy, you must give your name, rank and identification number. The enemy cannot legally get other information from you.

Do not discuss any military issues with anyone.

Soldier "Allies" may be an agent of enemy intelligence.

Forget everything you knew about your Army. Do not say anything if someone wants to discuss even minor details with you. 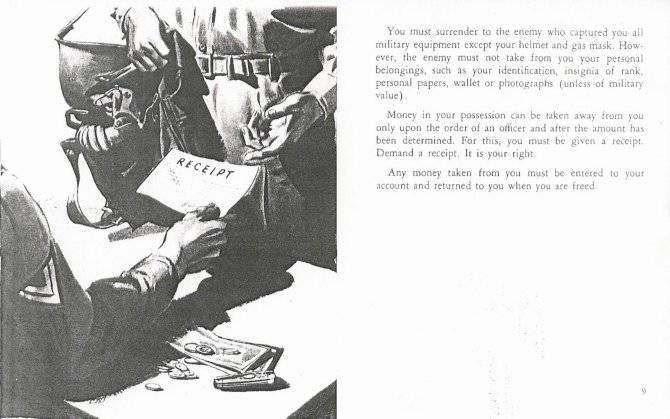 To the enemy who has captured you, you must surrender the entire military materiel, except the helmet and gas mask. In any case, the enemy should not take away your personal belongings such as your documents, signs denoting rank, personal papers, wallet, or photographs (unless they have military value).

The money you own can be withdrawn only on the orders of the officer and after determining the exact amount. On this you are required to issue a receipt. Require a receipt. It is your right.

Any money taken from you must be entered into your personal file and returned after release. 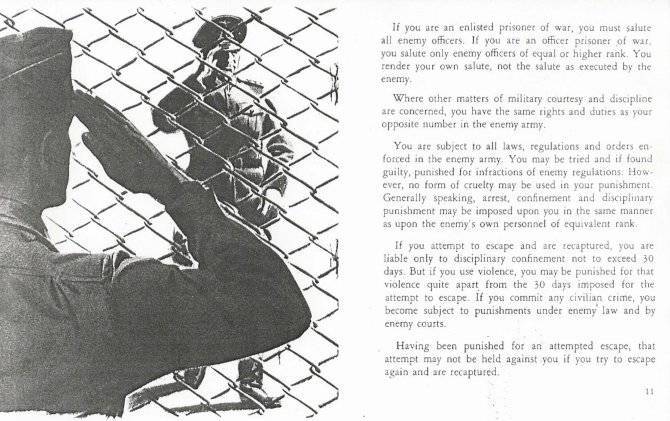 With regard to other issues of military courtesy and discipline, you have the same rights and obligations as a similar member of the enemy army.

You are subject to all laws, regulations and orders in force in the army of the enemy. You can be tried and convicted if punished for violating the rules of the enemy. However, in your punishment can not be accompanied by cruelty. In general, arrest, imprisonment and disciplinary punishment may be applied to you in the same way as to an adversary of equal rank.

If you try to escape and get caught, you may be imprisoned for no more than 30 days. However, if you use violence, then you can get a lot more punishment for 30 days for trying to escape. If you have committed any civil offense, then you will be punished according to the civil laws of the enemy and the tribunal of the enemy.

After serving a sentence for trying to escape, this attempt will not be made against you if you try to escape again and are caught. 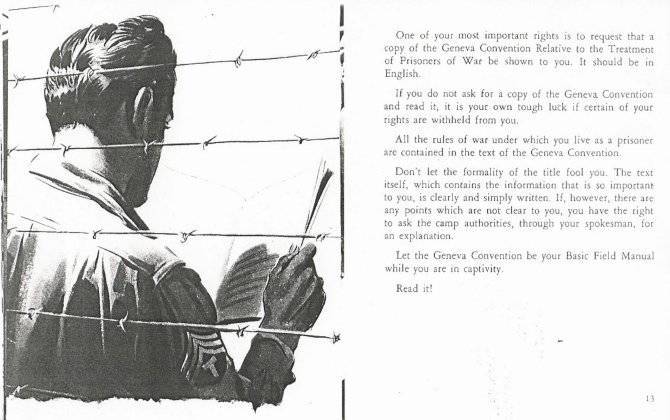 One of your most important rights is the right to request that you be shown a copy of the Geneva Convention relative to the Treatment of Prisoners of War. It must be in English.

If you do not ask for a copy of the Geneva Convention and do not read it, then it is your own merit that some of your rights will be withheld from you.

All instilled in the war in which you live in captivity, are contained in the Geneva Convention. Let the formal title not confuse you. The text itself, containing much-needed information for you, is clear and easy to write. If something is not clear to you there, you have the right to contact, through your representative, the camp administration for clarification.

May the Geneva Convention be your Basic Field Charter during your time in captivity. 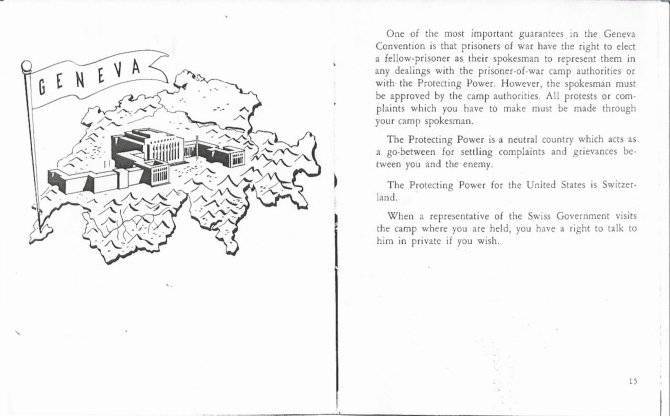 One of the most important that the Geneva Convention guarantees is the right of prisoners of war to choose the same prisoner as their representative, to resolve any issues with the administration of the prisoner of war camp or with representatives of the protecting power. However, the representative must be approved by the camp administration. Any protests or complaints you wish to make must be made through your camp representative.
The patron power is a neutral country that acts as an intermediary for resolving complaints and grievances between you and the enemy.

The patron power of the United States is Switzerland.

When a Swiss government official visits the camp where you are being held, you have the right to talk to him privately if you wish. 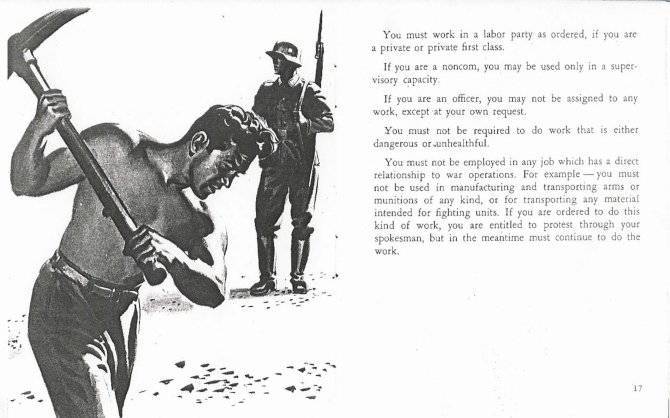 If you are a private or private first class, you must work in a work crew as ordered.

If you are a non-commissioned officer, you can only be used in a controlling position.

If you are an officer, then you cannot be assigned to any job unless you ask for it yourself.
You should not be required to perform hazardous or unhealthy work.

You should not be involved in any work that is directly related to military action. For example - you should not be used in production and transportation weapons or ammunition, or in the transportation of any supply for active troops. If you are ordered to do this, you have the right to protest through your representative, but at the same time you must continue to do the work. 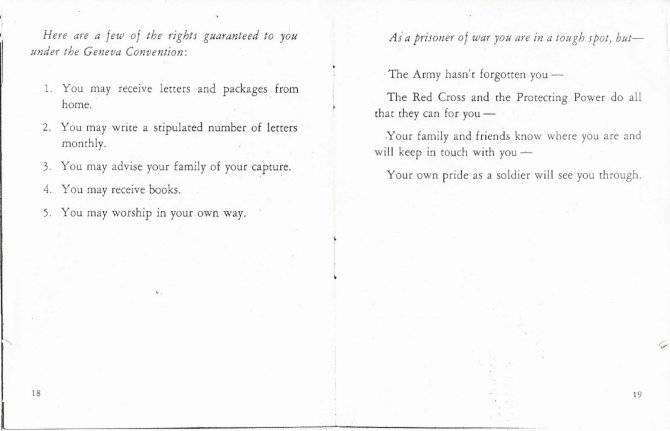 Here are some of the rights guaranteed by the Geneva Convention:

You can receive letters and parcels from home.

2. You can write the agreed number of letters every month.

You can tell your family that you were captured.

You can get books.

You can save your religion.

Like a prisoner of war in a difficult position, but -
The army has not forgotten you -
The Red Cross and the Protecting Power are doing everything for you -
Your family and friends know where you will contact you -

Your own soldier's pride is always with you.

Ctrl Enter
Noticed oshЫbku Highlight text and press. Ctrl + Enter
We are
Heroes of the legendary minerDiplomats of the People's Commissariat of Defense: on the eve and during the war
Military Reviewin Yandex News
Military Reviewin Google News
88 comments
Information
Dear reader, to leave comments on the publication, you must to register.