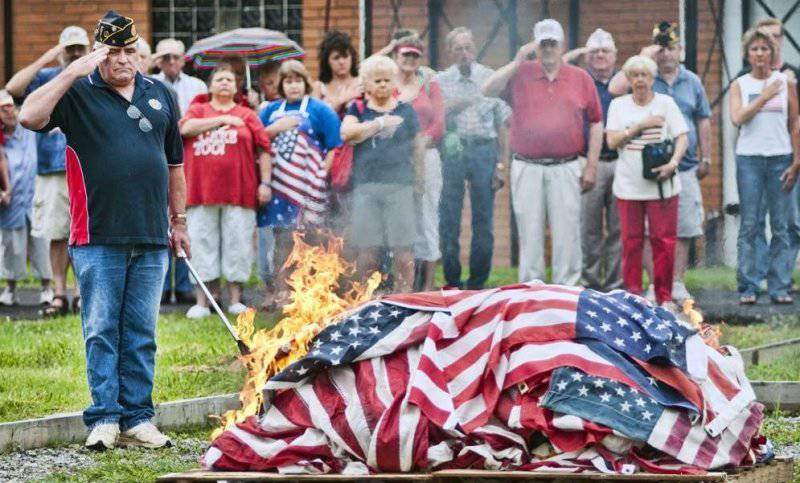 The bright holiday of US independence could have been more successful if not for a series of foreign policy failures. Talking about them is possible and not necessary, because all this happens in front of those who are interested the news and political analytics.

Nevertheless, let us try to consider some aspects of the US position internationally and, above all, in connection with the ongoing political detective story about Edward Snowden. The secret information sinks seem to be of the most interest to readers today. Therefore, the author of this article promises to merge information about Russian-language online media controlled by the United States. Now you will know everything and in the future you will be able for yourself to conclude who is who.

It is necessary to start all the same with the fact that with Snowden everything becomes more interesting and more interesting. In fact, we are witnesses to the clash of the special services and no one will ever mention anything like it. First time in stories we see everything almost on the air, we are witnessing an exciting party of the strongest opposition. The stakes in this matter are so high that the result of the confrontation will necessarily reflect on the image of the United States; this story will be reflected in the image of Russia only if Russia wins in this confrontation.

If Russia loses, then there will be no shame for Russia. Snowden is not a Russian headache. Putin, in this sense, only processes the material that has fallen on him. In addition, Putin does not exclude that Snowden is a provocateur. Perhaps this explains why Snowden managed to leave Hong Kong and what China knows about Snowden, that he does not show interest in his person? It looks completely illogical to hunt for American secrets, and when the informant himself swims in their hands, suddenly lose interest in him, where is the logic?

In addition to questions, you probably need to trace the dynamics of events. The incident with the plane Evo Morales, too, should not pass unnoticed. Here is a whole chain of events that should lead us to the idea that in this story there are more hunters than game. Analysts are inclined to say that the EU impacted the aircraft of the President of Bolivia not at the request of the United States. The EU tried to seize the initiative and get Snowden himself in order to find out who exactly and how the USA listened to in Europe. This suggests that Europe does not want to be content with American lies. After all, a month ago when asked by the senators whether the CIA Americans listened to the CIA director John Brennan confidently stated that he was not listening, now it turned out that he lied tritely. Why should Europe believe him in this case?

If Snowden were on the Morales plane, he would be arrested and he would have to testify who the Americans were listening to in the EU. The Americans were seriously scared and immediately turned to Morales with a request to extradite Snowden. The calculation was as follows: if Snowden was on the plane, then the European Union would immediately be relegated to the background, the priority would be for the United States, because this is a US citizen who illegally crossed the air borders without a valid passport. The EU would have to retreat.

In general, it must be said that from the very beginning everything was like wiring. The president of Bolivia willingly shared the idea that Snowden could be given political asylum. In the US and the EU, they immediately swallowed the bait and made a stand for the next plane through Europe. Who has it benefited? Among the beneficiaries is, of course, Russia. On the one hand, Putin no longer needs to tell Snowden what will happen to him outside of Russia, it seems that this is clear as May day. All this will have an effect on the fugitive in the way necessary for Russia. In this case, it is completely understandable that wherever a former CIA employee went to Europe, he would not be saved. Americans will dozhmut any country and will land any aircraft anywhere in the world. Does anyone have any doubts in this? Only Russia is beyond the control of Americans.

It is this last moment that reduces the jaws of those who would like to see Russia dead and blindly performing someone else's will. These people are not US patriots and act primarily in the name of their interests. At the same time, Snowden is the man who truly declared the proper height for public policy.

Well, what will happen next? By what we see, Putin has finally confused everyone. Journalists, like restless and stray dogs, scour in search of Snowden. Many adventurer journalists from all over the world are striving today at Sheremetyevo in the hope of seeing Snowden there. Nothing teaches these people. Did Putin serve for so many years in one of the most closed KGB units, so that some journalists could stare at someone who is so important to the whole world today? Agree, if you scan the Internet for the last week, then Snowden will come first, then Putin and then it doesn't matter who, but Obama is not among the top three. He just disappeared from the network.

With this, too, all is not clear. As stated earlier, many Russian-language online media are not controlled from Russia, and our portal CONTRPOST.COM as well. The difference here is that we do not receive money from anyone. Thus, we are able to speak regardless of what anyone would like to hear. Servers can be located anywhere and the names also do not mean much, but there is some way that will help to accurately determine whether the United States controls a particular resource. Today, July 4, readers of our portal have a wonderful chance to find out who is pulling the strings.

The thing is that 4 July is one of the greatest holidays of the New World. Today is US independence day. The holiday is so significant for Americans that working on such a day is a sin. Therefore, those online media that are controlled from the United States either will not receive new materials at all, or there will be very few of them. So what exactly today you will have the opportunity to dot the i's. Just browse the sites that you usually visit, and it will become clear to you who is who.

If we are talking about Independence Day, we would like to note that many families today will not have time for the holiday. For the first time in almost 30 years, the country's position is probably the lowest economically. Very often we hear about bravura employment reports, but this is the same truth as “the neighing of the gray mare for the old month”. Victory reports on the rising dollar is just speculation. The patient also sweated before cooling. One gets the feeling that everyone is very busy with their business and do not notice that the ship was left without a rudder and without wind. In such a situation, it is not Snowden who needs to be caught, but to hold his nose in the wind, it seems that no one in the US is going to do.

There is one very interesting difference between Russia and the United States. In the photo above, you see how obsolete flags are burned in the United States. Looking at all this I want to remember that in whatever form the battle flags in Russia would appear, they would never be subjected to such shameful burning. In Russia, these are symbols of the struggle for the Motherland and for justice; they are kept in museums and rooms of glory during combat units; the next generations of warriors are brought up in them. In the US, as we see, everything happens differently. Perhaps this is correct. We can’t say that under this banner we burned Vietnamese villages with napalm, but under this we made nuclear bombings of Hiroshima. These banners inspired American fighters for justice when they bombed Afghanistan, killing civilians and leaving untouched poppy fields intact. Under these banners, we bombed Libya and now cover the atrocities of cannibals in Syria, chopping off the heads of Catholic priests. It is possible that no one wants such a shame for their country, therefore the flags are burning.