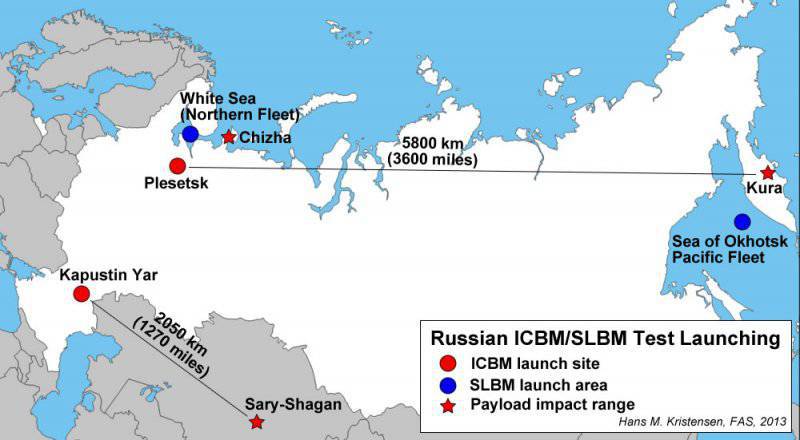 American expert on strategic weapons Hans M. Christensen (Hans M. Kristensen) in the article Russian Missile Test Creates Confusion and Opposition in Washington ("Missile tests of Russia create confusion and dissatisfaction in Washington", translated with which abbreviations - comment. "VP" ), published on blogs.fas.org 3 July, writes that the recent test launch of the modified Russian Rubezh ballistic missile is classified by some experts as a test of a new missile and that this test allegedly violates the agreement to control strategic servation, and in this regard, voices, whether the United States should continue to pursue the reduction of their nuclear forces.

Although there is a lack of some data on this rocket, the American intelligence community concluded that the rocket is a modernized RS-24 Yars (SS-27 Mod.2) with intercontinental range.

The article entitled Russian Aggression: Putin violating nuclear missile treaty (“Russia's Aggression: Putin violates the nuclear missile treaty” - translated by “VP”), published by the Washington Times Free Beacon, Russia accused of violating the INF Treaty range), concluded by the two countries in 1987 year. The treaty prohibits the creation and deployment of ballistic and cruise missiles with a launch range from 500 to 5500 km (from 300 to 3400 miles). It cites the words "one official" that a missile test is a violation of this agreement and that "two American intelligence officers believe that Yars-M is not an ICBM, but a medium-range missile." Two members of the US Congress made a request to the Obama administration that Russia might be in breach of the treaty and complained that they had not received a response. The presidential administration says it regularly informs Congress about compliance with arms reduction treaties.

The Washington Times has taken the trouble to interview Russian Colonel-General Viktor Esin about this rocket. The former chief of staff of the Strategic Missile Forces and, apparently, the consultant to the chief of the General Staff of the Russian Armed Forces stated that the Yars-M is a Topol-M ICBM and its range is more than 5500 km. ” This estimate does not correspond to the source from the Russian General Staff, said in November 2012 of the year after the launch of Yars-M, when rumors began that "Russia is developing a fundamentally new rocket." Yasin clearly said that we are talking about a modernized rocket equipped with a new warhead and led to the fact that the Liner SLBM (mod. SS-N-23) is also being presented as a new rocket, but “it is a modification of the“ Blue ”, equipped with an increased number of warheads and improved means to overcome missile defense. " According to him, the creators of "Yars-M" also went down this path, modernizing only the head part.

The fact is that in June 2013 of the year “Yars-M” was launched from the Kapustin Yar test site to the Sary-Shagan test site (Kazakhstan), the flight range was only 2050 km. In May last year, the same rocket was launched from the Plesetsk test center to the Kura (Kamchatka) test site, covering the distance of 5800 km, which is evidence that this missile is an ICBM. Colonel-General Vladimir Zarudnitsky announced that “the Russian Armed Forces had performed a promising test launch of the high-precision Rubezh ICBM. A spokesman for the Russian Defense Ministry, Colonel Vadim Koval, said that "the main objectives of the test were to obtain experimental data to confirm the validity of scientific, technical and technological solutions used in the development of ICBMs, as well as to check the technical characteristics of the onboard systems and components." The colonel further explained that "this rocket was created using already existing technologies that were obtained during the development of the fifth generation ICBM, which significantly reduces the time of adoption and the cost of its creation."

After a successful launch from Plesetsk, the second launch was carried out from the Kapustin Yar test site, probably to test the effectiveness of missile defense weapons. Industry sources told Interfax that a new high-energy rocket fuel was also tested, which reduces the active part of the flight of ICBMs and increases protection against missile defense systems. This is a rare but not unprecedented test of an ICBM from Kapustin Yar. It was probably carried out as part of an on-board anti-missile defense test. 7 June 2012 also launched Topol ICBMs (SS-25) in order to extend the service life of this type of missile, as well as “data obtained that will be used to create effective means of overcoming missile defense,” the Russian Ministry of Defense reported. After the 2013 test in June, Deputy Prime Minister Dmitry Rogozin said that the upgraded Topol-M (SS-27) is a “PRO killer”.

Short-range launch of an ICBM is not unusual and does not turn it into a medium-range missile. For example, in March 2006 of the Trident II D5 SLBM (range over 7400 km, or 4000 miles) was launched at a distance of 2200 km — almost equal to the flight of the Yars-M XMNX June-6 year. Of course, no one believes that the Trident II D2013 has evolved into a medium-range BR.

Conclusions and recommendations
If Russia really violates the provisions of the INF Treaty, then the United States should certainly raise this issue. The statement that the Yars-M ICBM is in fact an MRBD seems strange, since the rocket flew a year ago at a range of 5800 km, which corresponds to the distance of the ICBM. We do not know which of the American intelligence officers make such conclusions, whether they are accurate and whether these words are a coordinated position of the US intelligence community. Need more information about Yars-M.

Unlike the United States, Russia is already below the limits on deployed nuclear warheads under the START Treaty, and, probably, by 2018, these figures will fall even lower. Some Russian officials claim that withdrawal from the INF Treaty is needed to counter the nuclear threat from China, since this country is modernizing its arsenal of MRBD. Strangely enough, in the US, parliamentarians and experts who support the preservation of the INF Treaty are the same people who warn about the danger of modernizing China’s nuclear potential.

An article in the Washington Times Free Beacon seems to lose sight of the only way to get the consent of China and other “smaller” nuclear states to join the nuclear arms reduction process. This method is that if the United States and Russia take decisive measures to reduce their huge strategic arsenals, these countries can also follow this example. Why then find fault with the alleged unsubstantiated violations of the provisions of the INF Treaty, asks Hans M. Christensen.