Putin and Forts. As the namesake about the reform of Russian science in different languages ​​spoke

July 5 2013
148
Nothing in our country is carried out as quickly as a dubious reform. Slowly harnessed, fast going? .. Our Government really harnessed - not God knows, but now literally broke the chain (hmm ... is our Government chained? - although who knows who knows ...) 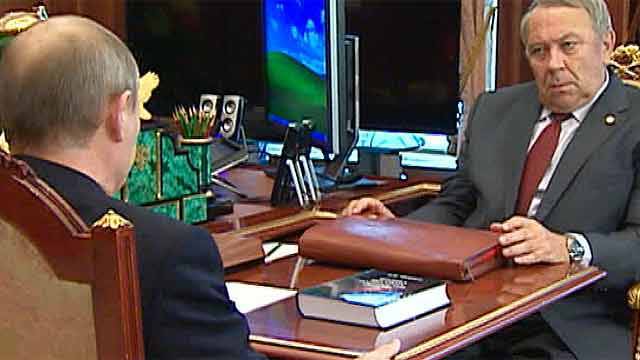 Another clearly ill-conceived reform emerged in the sphere of Russian science. This is against the background of the fact that the mechanism of the “reformed” (according to the letter of the new law) education has not yet been launched. Scientific reform, as has already been reported on the Military Review website, concerns the fact that the RAS will lose control over several academies of sciences that will be under the jurisdiction of a certain agency, and the RAS itself will be spared from managing its own property. The next “effective manager” will come, who will “help” the scientists ...

At the same time, the motives for the reform are approximately the following: our hearts (members of the Government) literally bleed at the sight of how our scientists have to do business, which takes them a lot of time from scientific research. Like, dear comrades scientists, so that you can work better and more productively in the scientific field, we will carry out optimization, tested by past reforms, and put the burden of responsibility for all scientific property on our fragile bureaucratic shoulders ... Scientists themselves translate this tirade into accessible language as follows: you hear , scientists! Something too divorced you, you are sitting on multi-billion-dollar property, do not share property with us (officials). And if so, we will halve your composition, we will lower the RAS under the bureaucratic apparatus, we will destroy the property following the example of the notorious Oboronservis, and after that - work yourself with God - after all, there will be no problems with the economy, because neither will there be (infernal laughter coming from outside the walls of the Ministry of Education and Science follows).

5 July The State Duma is going to consider a bill on the reform of the Russian Academy of Sciences. The most surprising thing is that even the Ministry of Education and Science, headed by Livanov, refuses to recognize the authorship of the bill. This, in particular, is stated by the elected president of the Russian Academy of Sciences, Vladimir Fortov.

Today I was surprised to find that the author does not have a document either. Livanov says that he did not even stand behind the backs of those who wrote the draft, says academician Fortov.

Strange ... Although almost from the very moment I found myself in the chair, the minister stubbornly insisted on the need to urgently reform the scientific system of Russia, building it in the American way and likeness, putting it on business rails. Moreover, Dmitry Livanov and Deputy Prime Minister Olga Golodets, confirming that the reform project is “somewhat unfinished,” continue to insist on its early adoption. At the same time, truly enchanting arguments are cited: until the bill has taken legal force, the scientific community will worry, and after the law enters into force, the same scientific community will cease to worry ...

In this regard, the statements of Livanov about the fact that “this is not me, this is someone else” look unintelligible and look more like a blatant lie.

It should be noted that Academician Fortov (elected president of the Russian Academy of Sciences) has been looking for meetings with President Vladimir Putin recently, wanting to bring to him that the Russian Academy of Sciences itself has plans for reform, and these plans are much more productive for the scientific community than those , news of which came from government offices. Vladimir Fortov achieved a meeting with Putin, but ... This very meeting made some kind of aching impression. Usually, the confident man and Forces, the Forts, looked absolutely depressed and hardly chose words to convince the country's president to decide at least to postpone the consideration of the bill, which most of our valiant lawmakers are ready to support. As they say, we would only have something to vote for, let’s press the necessary buttons ...

Forts went astray, allowed reservations, issued his excitement. He asked the president to give him a year first, then time until November, with the goal that he (the elected president of the Russian Academy of Sciences) would begin his version of transforming the scientific system of Russia. At the same time, President Putin gave the impression of a person who knows ahead of time that there will be reform (in its government version), and that all emotional upheavals of academicians of the RAS on this issue should be excluded. “It’s better to do than not to do it,” President Putin announced, rather than nullifying all the calls from Fortov’s namesake to postpone making a decision on the RAS. Fortov's proposals to give him a chance to carry out that reform of the scientific system, which has been worked out in the expert community of scientists, Putin left no response at all. At least, the journalists did not hear any comments from the presidents of the country. President Putin put the final point, said the word “recount!” In response to the accusations of Vladimir Fortov who concocted the bill in arithmetic illiteracy.

After the meeting of the two names of the presidents (the president of the country with the presidents of the Russian Academy of Sciences) there was a feeling that Fortov was given to understand: Vladimir Yevgenyevich, although we were elected to the presidency, but the president is the only one in the country, and his patronymic is definitely not Yevgenievich ... If it is “better to do,” it means who will do it. If we “recount!”, It means that someone will extract their large bureaucratic calculators from wide pants and start to “recount”. Someone will press the "correct" buttons when voting. And as a result, “effective” managers of the Ogurtsovs, who, denounced by the authorities, will begin to impose “order” in the economic sector of the academy with a clear desire to “manage” by the academic community, will flow into the scientific sphere of Russia. Just give our official! He will quickly indicate on which door one or another academician should enter, and which one to go through, which project to start, which one to cut. Management, tree-stick ... Yes, and eHWeHtivny.

And after this briskly carried out reform in a mode of lightning and victorious war, the appearance of thousands of publications by Russian academics in English-language journals (what Mr. Livanov is dreaming about) seems to be seen as being literally pulled from the place of Skolkovo along with Rosnano ”, how our ships will start something again and plow somewhere, how our scientists one by one will become Nobel laureates. Such a beautiful rainbow dream.
And in reality: it is necessary to save not only the property of the RAS, as it already was with the property of the Ministry of Defense, but also the academicians themselves, many of whom have already stated that they are not going to work under the command of the Ogurtsovs.

PS Education, medicine, police, police, army, Roscosmos and the political system have already been reformed. Why would you put your hands? ..

Ctrl Enter
Noticed oshЫbku Highlight text and press. Ctrl + Enter
We are
Results of the week. “He who does not regret the collapse of the Soviet Union, has no heart; who wants to recreate it in its previous form, he has no head "Results of the week. “You do not know what to do? Fell - wrung out! "
Military Reviewin Yandex News
Military Reviewin Google News
148 comments
Information
Dear reader, to leave comments on the publication, you must to register.