July 4 2013
15
Over the past fifteen years, a lot of interesting ammunition designed for snipers has appeared. Many of them remained unclaimed and very rare, despite their characteristics. Many have become mass-produced and generally accepted, as cartridges are in demand and necessary for successful implementation for certain tasks. Naturally for such ammunition required and appropriate weapon. Most often, manufacturers followed the path of least resistance, adapting this or that model of sniper rifle to a new cartridge. But very often this led to the fact that the weapon turned out too heavy or, on the contrary, too light for a new ammunition. And if in the first case, the excess weight had a positive effect on the recoil compensation during the shot, which can be attributed to positive phenomena, in the second case, the low weight of the weapon was good only in terms of transportation. But a lot of samples were created from scratch, originally designed for a new ammunition, which means that they were created only for one cartridge and no other. One of the relatively new ammunition, which we will examine in this article, is the .408 Chey Tac cartridge. Rather, we’ll get acquainted not so much with the cartridge itself, but with one of the rifles created specifically for this ammunition - THOR M408, and it’s just impossible not to mention the cartridge itself. From the cartridge and begin. 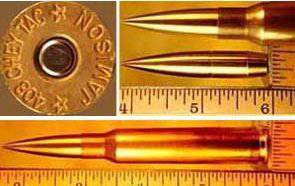 The .408 Chey Tac munition itself appeared in the 2001 year, while it should be noted that this cartridge was originally developed as a high-precision one, although many claim that they wanted to make a replacement for the .50 BMG. From where such information was taken incomprehensibly, but the fastest such conclusion was made on the basis that quite a lot of tests of this munition were carried out using the M2 large-caliber machine gun, which made it possible to evaluate what the new cartridge is better than .50 BMG, and what’s worse with minimal expenses . Nevertheless, this ammunition was indeed considered as a replacement for the .50 BMG, but not among large-caliber machine guns, but among large-caliber sniper rifles. However, ammunition tests showed that excluding the use of the .50 BMG among the CWS is not a good idea, as it will significantly reduce the list of tasks that a large-caliber sniper rifle will be able to perform, but the .408 Chey Tac cartridge has several advantages. 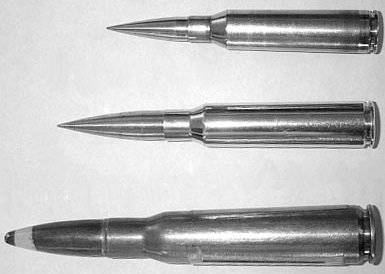 First of all, it is necessary to note the lower weight and dimensions of the ammunition. In addition, a smaller powder charge and a lower bullet weight when fired create less recoil, which is equally important. It is clear that the cartridge itself turned out to be “weaker” than the .50BMG, but we should not forget that science is not the easiest of ballistics, and the weight of a bullet and the powder charge do not give a complete description of the ammunition. Despite the fact that the weight of the bullet and the powder charge is less at distances after 700 meters, the kinetic energy of the bullet of the .408 Chey Tac cartridge is greater than that of the “fifty”, and at more distant distances the gap in the kinetic energies only increases. However, a large kinetic energy does not mean a greater armor-piercing ability or a greater damaging ability of the projectile, in this case the advantage is only in a higher speed of the bullet, as well as in the best ballistic coefficient. Thus, this munition has less armor-piercing, but much better accuracy, it is for this reason that it cannot displace the .50 BMG.

For all these reasons, it can be said with a very big stretch that the .408 Chey Tac cartridge takes an intermediate place between the Fifty Ten and the 338 LM, but this is more on the basis of its metric data than on any other characteristics. The real bullet caliber .408 Chey Tac is 10,3 millimeter. Made ammunition on the base of the sleeve .505 Gibbs, which is straightened to a diameter over the entire surface equal to 16,2 millimeter. This sleeve tapers down to a 11,1 millimeter, the total length of a sleeve is 77 millimeters, the total length of a cartridge 109,4 millimeter. The bullet can be 19,8 grams or 27,2 grams, respectively, its initial velocity will be 1100 meters per second and 910 meters per second, and the kinetic energy will be equal to 11251 Joule and 11356 Joules. On 1840 meters, the cartridge itself ensures accuracy of less than one angular minute, the maximum of which was achieved with a little less than 0,3. Calculate how it is scatter. Here is such a harsh reality, even with such ammunition, and you speak almost 2,5 kilometers in the head ... 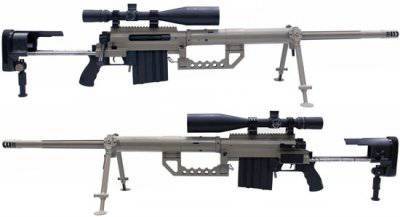 The THOR M408 rifle is not the only or the first CWS developed for this ammunition; however, it attracts attention. And it attracts primarily with the appearance, which is created by the combination of many decisions of designers, and some of them are quite controversial. In general, many consider this rifle a further development of the Chey Tac M200, which was discontinued. It is difficult to disagree with this statement, but we are talking about a “bolt-on rifle,” and here you will not think up many new things. So you can find a relationship even in completely distant from each other samples.

The appearance of the weapon really causes a lot of questions. First of all, the butt, which can be adjusted along its length, catches the eye. The thing is that the butt itself is fixed on two rods of a small section, for a wire butt, say for a submachine gun, it may be a good solution, but for a sniper rifle under a not very weak cartridge, such a butt even visually seems very flimsy. Although in the folded position, or rather pushed to the stop, it can significantly reduce the length of the weapon. Under the butt is a height-adjustable folding third "leg". There is an emphasis for the cheek, but it is made unregulated, which is a minus for such weapons. Very very with 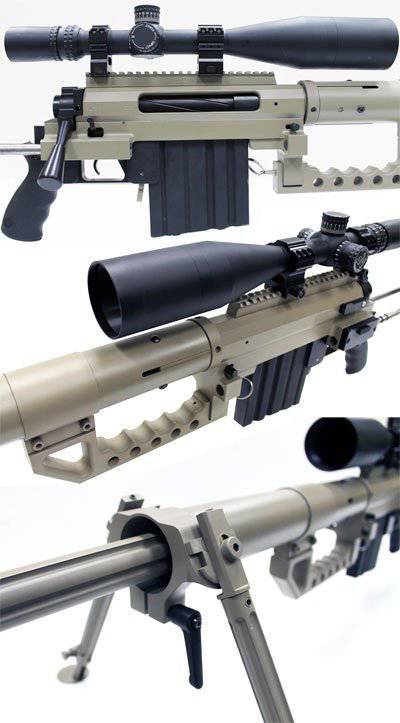 A spurious decision was to place a large enough handle to carry the weapon on the bottom of the rifle. When carrying weapons for this handle is very high probability of damaging the telescopic sight, catching them for any object. Yes, the handle itself of this size adds weight to the weapon, although it looks beautiful and unusual. Another element that can be distinguished is the bipod of a rifle, which are attached, compressing the forearm of the weapon. Considering that the forearm itself is a smooth tube, this solution can be attributed to pluses, since the mount can be moved along the entire length of the forearm, choosing the right balance depending on the installed accessories or a non-standard trunk. In all other respects, the weapon is quite ordinary.

The barrel of a rifle is thick-walled, has longitudinal valleys to increase rigidity, freely hung. The bolt of the weapon is longitudinally sliding, locking the bore when turning. On the surface of the bolt there are also spiral-twisted valleys into which dirt is squeezed out, which impedes the motion of the bolt, due to which high reliability of the weapon is achieved in adverse conditions. It feeds a rifle from a detachable box magazine with a capacity of 7 cartridges. The length of the weapon barrel is 762 millimeter as standard. The total length of the weapon ranges from 1219 millimeters to 1384 millimeters, depending on how the butt is pushed. The rifle's weight is 11,79 kilograms. The manufacturer claims an effective range equal to 1800 meters, but since the munition itself is intended more for firing at enemy personnel, in practice this range is much smaller, although if the enemy is a 100 man, you can try to shoot with a fairly large percentage of hits .

Thus, it can be concluded that the ammunition itself is intended more for the civilian market, since the destruction of single targets, even within the framework of such a fashionable expression as “anti-sniper shooting” is very controversial. High accuracy is certainly good, but something suggests that more large-caliber and not at all manual weapons are much more effective in fighting with snipers. Machine gun calculations and so on, of course, you can try to shoot off with such a weapon and cartridge, since at least they can be seen, but this is practiced back when there are no alternatives. But in a relaxed atmosphere, slowly, warming the cartridge under the armpit, it is quite possible to shoot at the banks for one and a half thousand meters, for your pleasure and for your friends. Do not survive this .50 BMG ammunition and do not replace .338 LM. Although the cartridge itself is certainly good.