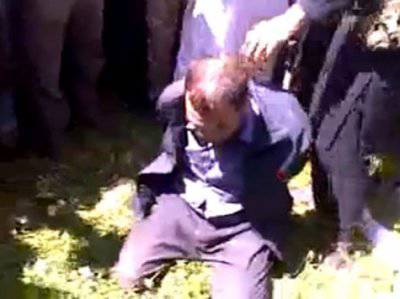 In May of this year, the world was shocked by a video clip, in which a militant of the “opposition” cuts through the chest of a dead Syrian soldier and defiantly, on camera, eats his internal organs, telling that “this will happen with every alawite”. Later in an interview with the Western press, the same cannibal talked about how he had cut the chainsaw into another Alawite. Unfortunately, these terrifying cadres did not teach anything to Western politicians who announced a buildup of assistance to Syrian "fighters for democracy" - simply, cannibals. Now the “oppositionists” have distinguished themselves with a new massacre - this time over the Christians.


On a terrible video is a gangster "trial", simply - lynching. The bandits surrounded two bound people who looked like Christian priests. They read the "sentence". The main accusation is that the numbers of Syrian soldiers were found in their mobile phones. Although these numbers have many priests, journalists, humanitarian workers, doctors, to contact the person who would provide the opportunity to move to the desired area. But vigilantes don't take that into account. For them, not burdened by intelligence, the presence of military numbers on the phone is in itself a terrible crime. On its basis, they make even more shocking conclusions - as if the very existence of such numbers is complicity in the "reprisals against the rebels." And Christian religious figures are declared "punitive."

Then - scary shots that are difficult to watch out to the end ... The short Lynch trial is over - it lasted no more than 5 minutes (is it scary to assume how long the “investigation” in this “case” lasted?). The sentence read. There are numerous cries of "Allah Akbar." The related defendants are taken down one by one and felled on the ground and their heads cut off. They are shown to all those present, and the cries of “Allah Akbar” are heard again.

There are two more terrifying moments. Firstly, the voice in the video sounds in Russian. A militant with a clear Caucasian accent gives the order to his accomplices "Do not heap." Thus, the fact that the Wahhabi mercenaries from Chechnya and neighboring regions are taking part in the fighting on the side of the terrorists is again confirmed. And this is at a time when the official position of Russia regarding the crisis in Syria is absolutely the opposite - the Russian Federation opposes terrorism and for the peaceful resolution of the Syrian problem. The question is - where do law enforcement agencies look? Firstly, the danger of this fact threatens the citizens of Russia living in Syria, of which there are quite a lot. Secondly, if these gangsters who have gained combat experience return to Russia, one can only assume what danger they will pose.

The second terrible moment - on the lynching and the subsequent cruel act of cutting off the heads, there are children. Among the many cries of "Allah Akbar" heard and children's voices. The question is - what sadists can be made of boys who, from early childhood, not only see acts of horrific cruelty, but are accustomed to perceive them positively and rejoice at the sight of this spectacle? Thus, in addition to murder, terrorist attacks, destruction and terrible massacres, the Syrian terrorists, hiding behind democratic slogans, are doing another terrible crime - crippling children's souls from the earliest years ... This is done for a reason. They are accustomed to violence and blood, because then they plan to involve these children in armed groups and make of them the same murderers and thugs.

Who were the Christians who were executed in such a cruel and bloody way, after a five-minute trial? Shortly before the video appeared on the network, there were rumors that the metropolitans kidnapped by militants in April of this year were killed.

Let me remind you that the Metropolitan of the Aleppo Orthodox Church, Pavel Yazhidzhi, and the Metropolitan of the Syrian Orthodox Church, John Ibrahim, were abducted by terrorists in the province of Aleppo, near the Turkish border, 22 April, their driver, also a representative of the Christian church, was killed. They tried to negotiate the release of other people kidnapped by the “oppositionists”, and in the end they themselves became victims of the crime.

For the captured metropolitans prayed in many churches of the world, even the Pope spoke in their defense, but for the bandits and his words - an empty sound. What again would have caused the West to think about those whom it supports ...

At first there was an assumption that the brutally slaughtered people from the video were they. Then, one of those executed became known to the official Vatican - 49-year-old Catholic priest Francois Murad, who was abducted earlier from a monastery plundered by rebels. The second is most likely his assistant.

The priest Francois Murad is known for initiating the construction of the St. Simon the Stylite monastery, now destroyed by terrorists, in northern Syria. Then he was forced from there to move to another monastery, where he assisted many people. This is all his "fault."

At the same time, the abducted metropolitans Paul and John, perhaps (if they are still alive), continue to remain in the hands of furious gangsters. And where is the guarantee that they will not expect the same painful fate?

However, the Vice-Speaker of the State Duma of the Russian Federation, who headed the Russian delegation at a meeting of the Inter-Parliamentary Assembly of Orthodoxy, suggested that the abducted metropolitans have already been killed. The Russian Orthodox Church stated that there is no information about their fate either at the Russian Embassy in Syria or at the Church of Antioch.

Zheleznyak said that the problem should be brought to the attention of the international community: "If we don’t worry about the fate of these people who have now disappeared and may have died, then such unpunished crimes will continue."

“Behind these conflicts, beyond terror, there are neither religious values ​​nor any political positions. This is pure banditry, and it is precisely how banditry should be treated as such. And no measures to support banditry under any pretext can be acceptable to us, ”he added.
With these words, it is impossible to disagree. Western public opinion was little disturbed by the numerous terrorist attacks in Damascus, Aleppo and other cities in Syria, which resulted in the deaths of hundreds of innocent people. Westerners were not outraged by mortar shelling of "opposition" schools, which killed the lives of innocent children. The case of the death of seven teachers as a result of the fact that the rebels shot down their helicopter, on which they moved to organize exams in the villages of Aleppo, went unnoticed in the same West.

Maybe even such a painful death of priests at the hands of lynch mobers will anger ordinary Europeans and Americans? And they will finally ask their governments why their money, taxpayers' money, go to help militants who commit such atrocities, cut off heads, sow hostility on religious grounds, hating not only Alawites, but also Christians, and arranging monstrous Lynch courts under the guise of "the struggle for democracy"? And why are the Syrian insurgents and the radical Islamist “International” from all over the world who are at war with European and American politicians so that the West betrays their own centuries-old values ​​for them, allowing them to kill even Christian clergymen?

PS Terrorists, meanwhile, continue their bloody atrocities. In the metropolitan quarter of Tadamun, gangsters bombarded residential buildings with mortars, injuring 10 people. Among the victims are children.

In the city of Homs in the neighborhood of Bab Hood, the militants who suffered defeat from the Syrian army finally decided to take revenge on the city and its inhabitants. They bombarded the 7-storey apartment building, which also housed government agencies responsible for housing and social assistance. As a result, major material damage was caused to the General Directorate of Social Protection.

And the following case can tell about the morals of “freedom fighters”. In the province of Aleppo in the village of Tel Rifat, the militants did not share among themselves weapon and ammunition delivered from Turkey. As a result, a riot broke out between them, in which criminals from both sides were killed. Most of the conflict-causing munitions were expended during the division.