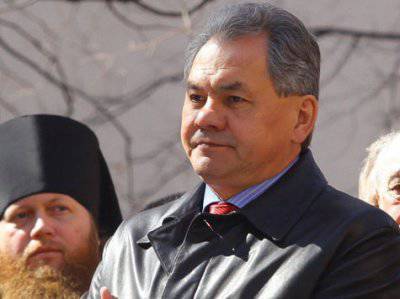 The scandal around the repair plants continues. On Tuesday, a conference call at the Defense Ministry chaired by the head of the military department turned into a sensation. It turned out that Spetsremont OJSC, one of the subsidiaries of Oboronservis, which is responsible for the repair of ground-based equipment, practically does not work in some areas. Obviously, radical measures will be taken against the company and its management.


At the beginning of his speech, Sergei Shoigu recalled that at the board of the Defense Ministry held last week, a plan for the development of the Armed Forces was adopted in accordance with the program decree of the President of 7 in May 2012 of the year. The plan immediately appeared on the ministry’s website as an interactive section. As a result, the section itself on the first day had more than 30 thousands of visits, and the total counter of the entire site was getting close to 300 000.

Among the nine issues on the agenda of the meeting, the Minister singled out two. The first concerns the disastrous state of affairs with the repair of military equipment.

“Last year, the executive contractor of Spetsremont OJSC covered less than 30% of the total number of equipment planned for maintenance and repair of the Southern Military District,” Shoigu stated. - This year this indicator is less than 10%. Obviously, such a state of affairs requires urgent intervention. I really hope that there is no elemental sabotage and self-worth.

Such a tone of the minister obviously indicates that the relations between the military department and the repair holding company have reached an impasse. Recall, a similar situation had to do with another daughter of Oboronservis - Aircraft Repair. Irina Krivich, who was appointed director of Serdyukov there, strongly resisted the proposed new command concept of transferring repair plants to industrial enterprises and entrusting them with the functions of mid-level and major repairs. As a result, the protracted conflict was ended by the dismissal of Krivich in May of this year.

As reported, in 2011 and 2012, the Ministry of Defense conducted 100% advance work on Aviaremont, but the plan was not carried out. As a result, the holding was unable to report to the Ministry of Defense on the amount of 75 billion rubles, although it had millions of revenues. Probably, some similar situation takes place in “Spetsremont”.

In addition to repair Shoigu talked about construction. Under the new military equipment purchased on a significant scale, the corresponding new infrastructure must also be prepared. First of all, it concerns the naval bases on the Black and North Seas, in the Pacific Ocean - the facility in Vilyuchinsk was in a straight line with the Minister. Also, apparently recalling his Friday trip to the Astrakhan region, the minister mentioned the Iskander-M, which all the missile brigades should be equipped with before 2018, and therefore they also need to build new bases for them.

After that, the minister asked the journalists to leave the hall, but with an edge of their ears they had time to hear that Vladimir Nesterov from the “Khrunichev center” was being called for a video report. The item on work on the Angara launch vehicle was on the agenda, but something suggests that not only it was discussed with the speaker, but rather the loss of the Proton and navigation satellites.

Ctrl Enter
Noticed oshЫbku Highlight text and press. Ctrl + Enter
We are
The Secretary of Defense held the first conference call this year.The structure of Oboronservis today
36 comments
Information
Dear reader, to leave comments on the publication, you must to register.