July 4 2013
11
The VI International Naval Salon opened in St. Petersburg yesterday (IMDS, or IMDS - International Maritime Defense Show). Over the past years, this exhibition has managed to become one of the largest and most authoritative events in the naval field, and therefore specialists from many countries arrived at IMDS-2013. Thus, according to an official press release, more than 70 delegations from fifty countries arrived at the salon. As always happens at such events, manufacturers of equipment and machinery designed for the naval forces will show their products, and potential buyers will get to know them and choose suitable options. 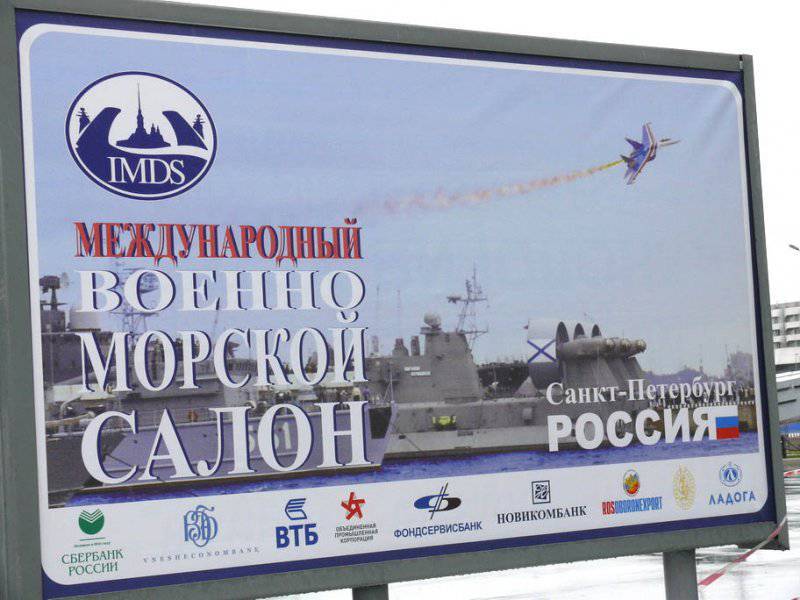 On the open areas and in the pavilions of the exhibition IMDS-2013 there were stands and product samples from four and a half hundred companies and organizations, including foreign 80. In addition to Russia, three dozen other states are participating in this salon. The event takes place in the exhibition complex "Lenexpo", near the Marine Station. At the berths of the latter in the framework of the exhibition are 36 ships and boats of various types, built by Russian enterprises. In addition, the cabin will be attended by a frigate and a submarine of the naval forces of the Netherlands, as well as a Polish warship. Demonstrations of the possibilities of technology are planned in the nearby area.

Several helicopters of the Russian Navy, built by the Russian Helicopters corporation, are demonstrated at the open "land" areas of the cabin. Another domestic enterprise, the Morinfosystem-Agat concern, shows at once two of its developments: the Bal-E coastal missile system and the Club-K container-based rocket system. A large number of developments and promotional materials are presented in pavilions, on the stands of companies participating in the exhibition.

The organizers have chosen the Rzhevka training ground as an additional site for some of the exhibition events. On the first two days of the IMDS-2013 exhibition, demonstration artillery and rifle systems will be conducted on it. weapons. Unfortunately for the public, this part of the salon is available only to accredited professionals and the media.

It is worth noting that for the first three days the International Naval Salon will work exclusively for specialists and official delegations. An interested public will be able to attend the exhibition only on July 6 and July 7, in its last two days. However, this division of cabin time is not strange or unusual. The fact is that various conferences, meetings, seminars, press conferences, etc. are scheduled for the first three days. events of interest only to professionals.

On Saturday and Sunday, everyone will not only be able to see the expositions of the companies participating in the cabin or the ships at the berths. On July 6 and 7 scheduled visits to warships and boats. On Saturday, there will also be a sailing regatta, and on the last day of IMDS-2013, the Russian Knights, Strizhi and Rus aerobatic teams will perform. Thus, the organizers of the international exhibition did everything possible to make it interesting not only for specialists, but also for people who are simply interested in naval topics.

Of all the expositions of Russian enterprises, the stand of the United Shipbuilding Corporation is the most interesting. OSK unites a large number of plants and organizations engaged in shipbuilding, and thanks to this its stand at MVMS-2013 is one of the largest. At the general exhibition, 15 projects and products of various organizations from the USC are presented. The exposition of the United Shipbuilding Corporation occupies approximately 1200 square meters and is divided into five zones, each of which is dedicated to its subject matter: promising projects, surface ships (frigates and corvettes), submarines, boats and civilian ships.

The main elements of the exposition of USC are several new projects. Thus, the Central Design Bureau of Marine Equipment "Rubin" presents its projects of non-nuclear submarines: the Amur-950 with a diesel-electric power plant and the Amur-1650 with an air-independent. Other enterprises that are part of the United Shipbuilding Corporation, represent other developments, such as the frigate of the project 22356 (Northern PKB), patrol ships from the Central Design Bureau "Almaz" and several types of boats for various purposes.

The International Naval Salon in St. Petersburg will last until the end of this week. It is expected that it will be signed new contracts for the supply of weapons and equipment. Also, during numerous seminars and conferences, experts will be able to exchange views on various issues related to the construction and equipment of ships. Finally, entertainment events are provided for ordinary visitors to the salon who are not related to business or defense. This means that IMDS-2013 will be of interest to a wide range of people who are professionally connected with the naval sphere or who are only interested in it.