July 4 2013
106
The closer the withdrawal of the ISAF contingent from Afghanistan, the more passion unfolds in the press. If earlier they wrote about the drug trade, which NATO members, especially Americans, had a positive influence rather than a negative influence in Afghanistan, now analysts are busy speculating on how soon the Afghan insurgents, whose homeland has long been bored, will start organizing terrorist attacks somewhere closer to Russia and then on its territory. As proof of the terrorist plans against the Russians, Moscow’s arms “to the teeth” of the armies of Kyrgyzstan and Tajikistan and the recent alarming meeting of the defense ministers of the SCO countries are cited. The aggressiveness of the Taliban is emphasized by their last bold attacks - for example, in Kabul. 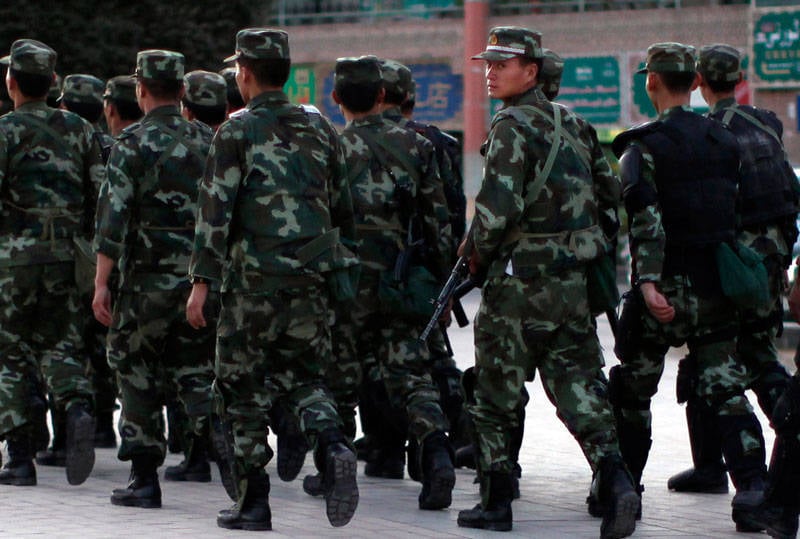 Editorial "Independent newspaper" from 27 June is not without reason entitled: "Russia is preparing for war on its territory." And the subtitle of the material is appropriate: "The promise of Afghan terrorists to turn around in the post-Soviet space is not a bluff at all."

In countries bordering Afghanistan or located in relative proximity to it, they are aware of the reality of the threats emanating from there, the article notes. First of all, this concerns the former Soviet republics, as evidenced by the recent events in the framework of the Collective Security Treaty Organization and the Shanghai Cooperation Organization.

On June 26, a meeting of defense ministers of the SCO member states was held in Bishkek. The head of the Russian military department, Sergei Shoigu, met with Kyrgyz President Almazbek Atambayev and assured the latter that at the end of 2013, Moscow would begin deliveries of weapons to the republic. This statement, the newspaper notes, was made against the background of the message of the Defense Ministry of the Russian Federation that at the meeting of defense ministers "special attention will be paid to the possible destabilization of the situation in Afghanistan after 2014, in connection with the withdrawal of ISAF from the region."

Similar issues (“the same bleak outlook”) were also discussed by the participants of the Second Meeting of the Heads of the Border Services of the SCO Member States, which took place on June 25-27 in Yekaterinburg.

25 June in Moscow, a meeting of the CSTO Military Committee. The committee considered the issue of solving the tasks of military-political integration, which were identified at meetings of the organization’s statutory bodies and the informal summit of the heads of the CSTO member states 27-28 in May in Bishkek. CSTO Secretary General Nikolai Bordyuzha described the tasks set there as follows: “There are two vectors in our work. The first is cooperation with the Afghan authorities, helping them to ensure stability, preparing law enforcement agencies, and implementing social and economic projects. The second is the strengthening of the CSTO’s power capabilities, Collective Rapid Reaction Forces, bilateral groups and peacekeeping capabilities. Plus, the issues of state border protection. ”

The editors of NG make conclusions: for citizens of the CIS countries, this means admitting the inevitability of fulfilling the long-standing threats of Afghan terrorists to transfer actions to post-Soviet territory. Military experts say that the Afghan terrorist groups are largely replenished by young people from Tajikistan, Uzbekistan, and Kyrgyzstan. These same young people are then revealed by the special services as leaders of Islamic extremists in St. Petersburg and other large Russian cities.

Andrey Ivanov ("Free press") The article "The Battle of the Amu Darya" gave the following subtitle: "Russia will equip the Kyrgyz and Tajik armies to the teeth." Against who?"

According to the Russian Defense Minister, in 2014, Russia plans to begin supplying arms to Kyrgyzstan (the contract amount is over $ 1,1 billion). Tajikistan will receive weapons worth about 200 million

Cross-border conflicts between Kyrgyzstan, Tajikistan and Uzbekistan may become more serious after the withdrawal of the ISAF from Afghanistan. The recent decision of Tashkent to withdraw from the CSTO will also affect the situation. The journalist believes that all this suggests a possible split in Central Asia. In addition, Washington promised after the withdrawal of troops from Afghanistan to leave a large part of the weapons to Uzbekistan. The analyst also recalls the long-standing statement of the President of Uzbekistan Islam Karimov that he does not rule out war with Tajikistan - if the latter does not agree with Tashkent on plans to build a hydropower station.

The army of Kyrgyzstan totals 15 thousand people. “It is difficult to imagine,” the journalist writes, “what degree of technical equipment this small army will have after our country ships helicopters and infantry fighting vehicles to it, Tanks, artillery systems, mortars and small arms for a billion! ”

Valery Korovin, director of the Center for Geopolitical Expertise, believes that Russia's efforts will not be in vain. According to him, it is difficult to return to the region: we are talking about the need to oust the United States. As for Kyrgyzstan, for it "a real geopolitical battle is unfolding."

“... We almost lost this country. And every attempt by Moscow to return its influence ended with another “color” revolution. The new contract for the supply of weapons, debt relief - is an indirect payment to Russia for the promises of the Kyrgyz leadership to put an end to the issue of withdrawing the American military base Manas from its territory. It remains for us now only to rely on the political will of the President of Kyrgyzstan in expelling the Americans.

We need to push the US south, away from our borders. The further the American bases are from our borders, the calmer. Therefore, the issue of restoring our influence in Kyrgyzstan is not at all idle. ”

Comrade Korovin said that security and economic problems arise in those states that are becoming allies of the United States. But those republics, “which choose Russia as their main partner, can ensure both security and relative economic stability”.

According to the expert, "The United States is building up its influence in the world with traditional instruments: through destabilization of the situation."

Nikita Andreevich Mendkovich, an expert at the Center for the Study of Modern Afghanistan, in a material published on the portal Afghanistan.ru, suggests that the period from April to September of 2014 in Afghanistan will be extremely difficult: you can expect fights with extremists against the background of attempts by the new president to adapt the work of state institutions to their own strategy. If armed militants fail to achieve any significant results in 2014, they will be weakened.

N. Mendkovich does not exclude the probability of failures of pro-government forces. The Taliban may complicate the situation in Kabul and sow panic among the population.

The analyst is inclined to believe that a protracted war is not for militants. The Taliban will not be able to provide an adequate level of supply for large units. During long battles, the Taliban will suffer heavy losses due to the use of artillery and aviation. It turns out that the armed opposition can either quickly win the war, the expert writes, or completely lose it.

“If by the autumn cold weather of 2014, the authorities manage to retain the capital, maintain stable state institutions and not lose power due to contradictions in the legal political system, this can be called a definite victory in the military campaign of this year. And, perhaps - in the war. "

The return of Russia, ready to confront terrorists, to Central Asia is worried not only by the United States, but also by China. Vladimir Mukhin ("Independent newspaper") notes that attention is focused on Central Asia now and Beijing. Under the guise of participation in the SCO programs, a columnist believes, China has stepped up its military-economic activity in the region. Russia, he is unlikely to concede.

As comrade Mukhin notes, before the preparation of the SCO summit to Bishkek and during the meeting, the heads of the military departments of the Russian Federation and the PRC were allocated with their contacts and statements.

China’s Minister of Defense Chang Wanquan arrived in the Kyrgyz capital two days before the event and discussed bilateral military-technical cooperation programs with the republic’s leadership, met with the Kyrgyz leadership and handed over military equipment and sixty Cadillacs to the country's defense department. He further promised that the Chinese would build two nine-story apartment buildings for the country's officers, as well as implement other projects in the areas of humanitarian programs and defense.

Russian Defense Minister Sergei Shoigu spoke with the leadership of Kyrgyzstan a day later. Unlike Chang Wanquan, the NG observer notes, Shoigu did not mention any figures or events. “Almost everything is ready with us,” Shoigu said. “I think that in the near future we will complete the final formalization of the formalities.”

We are talking about the gratuitous military assistance of Kyrgyzstan for the above-mentioned amount - 1,1 billion dollars. Earlier it was planned that arms supplies should begin in the summer, but now Shoigu promises to start them in the fourth quarter.

According to statistics from the Chinese Customs, the author writes further, the trade turnover between the PRC and Kyrgyzstan last year reached 5 billion dollars - two times more than the same figure for Kyrgyzstan and Russia.

The military-strategic interests of Beijing and Moscow in Kyrgyzstan overlap - and will increase after the withdrawal of the ISAF contingent from Afghanistan.

For the situation in Afghanistan and in Central Asia as a whole, the SCO and the CSTO are responsible. However, previously these organizations did not resolve such practical issues.

As a result, the observer summarizes, the responsibility for military security will de facto fall on the two leaders of these organizations - Russia and China. It is important that Russia predicts the consequences of the situation and outlines ways to resolve problematic issues.

Thus, the leading geopolitical players such as Russia, the USA and China converge in Central Asia. ISAF troops may leave Afghanistan next year, but the US does not intend to lose influence in the republics of Central Asia. The complex and sometimes conflict situation in the region allows them to apply their usual strategy of destabilization of the situation - in order to then make a fuss about security, thus justifying their own presence in the region. Strengthening in Central Asia, regaining its former influence there, Russia at one stroke two hares with a kill: it resists the terrorist threat, and really provides the very security that the State Department only knows how to write fairy tales.

Observed and commented on Oleg Chuvakin
- especially for topwar.ru
Ctrl Enter
Noticed oshЫbku Highlight text and press. Ctrl + Enter
We are
The southern frontier is under threat. Will Central Asia protect itself?Trojan horses in the SCO?
Military Reviewin Yandex News
Military Reviewin Google News
106 comments
Information
Dear reader, to leave comments on the publication, you must to register.