July 4 2013
61
Comrade Maduro visited Moscow. This visit was special: the president of Venezuela opened the street named after Hugo Chavez in the capital of Russia. On the eve of the arrival of an important guest, persistent rumors circulated in the media that Maduro flew to Moscow not only for the street and a handshake with Putin, but also to pick up an informant Edward Snowden in Caracas, still languishing in Sheremetyevo. 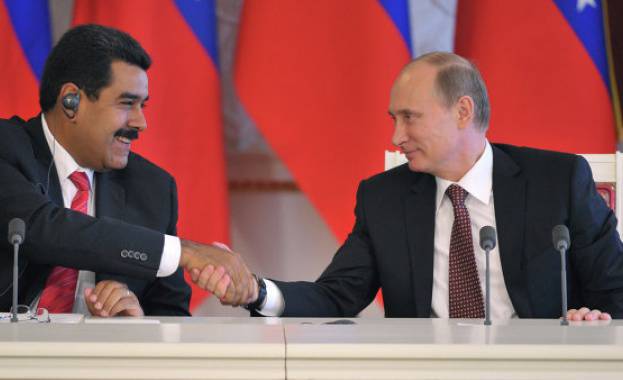 As for the brave American exposer who previously worked for the CIA and the NSA, Maduro rejected the press version of the secret of his goal. His main concern is the strategic interaction of the two states, successfully launched by Comrade Chavez.

The outcome of Maduro's visit is four agreements signed between Venezuela and Russia. As Svetlana Andreeva notes ("Voice of Russia"), Putin and Maduro signed a document on cooperation in the field of energy, an agreement on cooperation in the oil and gas sector, an agreement on the construction of a thermal power plant in Venezuela and interaction between Gazprombank and the state oil and gas company of Venezuela.

After talks with the president of Venezuela, the head of the Russian state told reporters: "Mr. Maduro and I have confirmed the general intention to ensure continuity of the course for strategic interaction between Russia and Venezuela in all areas." Comrade Putin stressed that the sources of bilateral cooperation "stood a big, sincere friend of Russia, a courageous and strong man - President Hugo Chavez." The Russian president assured that "Russia remembers and honors his memory."

Further, comrade Putin cited some results of bilateral cooperation between Venezuela and Russia: “In January-April, the trade turnover increased threefold, of course, this result was ensured by several large transactions - deliveries through military-technical cooperation and industrial equipment - but the overall positive trend is evident” .

The President of Russia listed investment projects in the energy sector (for oil production at the Junin-6 field, for gas turbine supply for power plants under construction), noted projects on the creation by KAMAZ of a joint venture with Venezuelan partners in the production of trucks and buses, for the transportation of " Sovkomflotom Venezuelan oil, for the construction of social housing in Venezuela.

At a press conference, V. Putin said: "We agreed to further coordinate joint work within the framework of the GECF on the development of the global gas market and the advancement of the interests of the countries producing gas."

Maduro said that in the near future offices of the Russian-Venezuelan Bank will be opened in Venezuela and China. According to the president of Venezuela, during the talks, the topic of direct flights between Moscow and Caracas was discussed.

As Tatiana Zamakhina writes ("MK"), Maduro’s hopes came true to take with him a signed agreement with Rosneft on joint offshore projects and with INTER RAO UES on the construction of a fuel and energy complex in Venezuela using petroleum coke. The journalist said that Putin "had good views on the continuation of cooperation: the companies of the Russian Federation and Venezuela, he said, have a joint investment plan for $ 20 billion. We will continue to help the allies: in particular, according to GDP, Russia will build social housing here (6 thousand apartments). In addition, Venezuelan students study at Russian universities at the expense of the Russian budget. ”

Alexander Dmitriev and Yana Pryamilova ("Work") note that the head of the Latin American republic participated in the summit of the Gas Exporting Countries Forum, where he supported Russia's position: against changing the long-term contractual principle of gas supply and decoupling contract prices from oil as a market indicator, as well as reducing the level of gas to be selected.

Oil and gas, the journalists write, is an anchor on which economic relations between Russia and Venezuela stand. Igor Sechin noted that in the future Russian-Venezuelan companies will extract 50 million tons of oil a year in Venezuela.

“Over the past decades we have built a whole map of various, diverse relations in different fields between our countries,” comrade Maduro said at a meeting with Putin. - We are well advanced in cooperation in the energy sector, in the field of oil, gas, building equipment for the oil and gas industry. Military cooperation is also progressing at a good pace. Relations are also developing in the financial, agricultural, cultural and educational spheres. We have 14 areas of development, 63 questions - topics on which we work ... "

Igor Sechin read Mayakovsky's poem: “In our veins there is blood, not water. / We go through the revolver barking, / To, dying, to incarnate / In the steamboats, in the lines and in other long affairs. "

Neil Nikandrov ("Fund of Strategic Culture") writes that Maduro thanked the Russian leader for assigning the name of Hugo Chavez to Moscow street and said: “Russia can count on Venezuela. For us, this is a very important event. ”

Vladimir Putin summed up the meeting with Comrade Maduro: “We had constructive negotiations, discussed key aspects of strategic cooperation, at the origins of which stood Hugo Chavez’s great and sincere friend of Russia. We reaffirmed the general mood for continuity of the course in all areas, agreed to further coordinate joint work on the development of the global gas market. Venezuela is our key partner in Latin America. ”

Thus, those Western analysts, who foreshadowed the inevitable collapse of relations between Venezuela and Russia after the presidential election, once again made a big mistake. Maduro clearly and consistently pursues the line of the predecessor of Hugo Chávez, and this means that the two states will continue to be strategically friends.

Observed and commented on Oleg Chuvakin
- especially for topwar.ru
Ctrl Enter
Noticed oshЫbku Highlight text and press. Ctrl + Enter
We are
"Rebellious Venezuelan Aviation." In memory of the commandant Hugo Chavez is dedicatedResults of the week. “You do not know what to do? Fell - wrung out! "
Military Reviewin Yandex News
Military Reviewin Google News
61 comment
Information
Dear reader, to leave comments on the publication, you must sign in.