Frigates for the Russian fleet. Class ships with a difficult fate 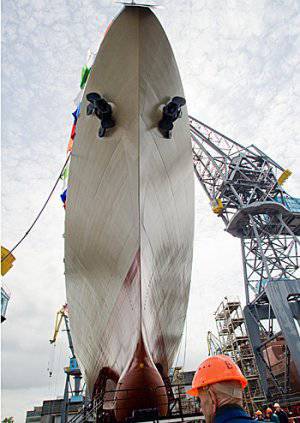 The 29 frigate of the 11356 project was handed over to the 2003 June India in a solemn ceremony in Kaliningrad. This is the sixth ship of the project, built for India. All ships of this type were built as soon as possible. The first series (Talwar, Trishul and Tabar) was handed over to the customer between June 2004 and April 2012. The second (Teg, Tarkash and Trikand) - from April 2013 to June XNUMX.


Director of Rosoboronexport Anatoly Isaikin said that Russia is ready to quickly build for India another 3 – 4 frigate of the 11356 project with improved characteristics.

For our own fleet The Yantar plant is building six more patrol ships (frigates) of an almost identical design. The lead ship for the Russian fleet, Admiral Grigorovich, was laid down in December 2010 and is preparing to launch this month. And on July 12, the fourth patrol ship of this series, Admiral Butakov, will be laid on Yantar. Thus, the project 11356 watchdogs are practically the only domestic serial surface ships. By the way, they are being built not only in a large series, but also very quickly.

There is an erroneous opinion that domestic shipbuilding is simply incapable of creating a truly new project. Therefore, they say, we grabbed the development of the old Soviet idea (the project number seems to indicate that this is just a modernization of the TFR of the 1135 project developed in the middle of the 60s of the last century) as the only opportunity to update the fleet. This is not true. Just like the statement that the 11356 project is outdated and does not meet modern requirements is incorrect. Of course, it was originally export. Therefore, it is true that Indian contracts have helped to master their serial construction and commissioning. In part, we can agree that the purchase of these ships was caused by delays and difficulties with completely new military ships (frigates of the 22350 Ave. and corvettes of the 20380 Ave.). But it’s impossible to agree that “11356” is outdated.

The project was developed by the Northern PKB as a purely export. Formally, it is the development of patrol ships (TFR) of the 1135 project (“Petrel”) and the 11351 project (Nerei) - which were built for the naval units of the border troops of the KGB of the USSR. However, in fact, he has very little in common with these predecessors. The predecessors had no strike weapons - anti-ship missiles. True, on the modernized TFR of the 1135M project, the Metel anti-submarine missile complex was replaced with the Rastrub-B complex, which could also fire on surface ships. But the ammunition remained the same - 4 rocket-torpedoes, which was not enough to overcome the enemy’s missile defense. Also, “Petrel” and “Nerey” possessed weak anti-aircraft weapons. It was limited to the Osa missile system, which by the beginning of the 80-s could not effectively deal with enemy air attack weapons. Shipborne artillery could fire on air targets (two 76-mm AK-726 installations on 1135 Ave., two 100-mm AK-100 installations on 1135 Ave.). However, the location of these installations (both in the stern) allowed firing only in a limited sector.

Meanwhile, the Soviet fleet needed a truly universal ship of medium displacement, with the ability to deal with ships and submarines and able to effectively defend against air attack. And we got such a "wagon". But not as the development of the former guard ships, but as a separate project of a new generation. It was created from scratch in Zelenodolsk PKB, which previously specialized in small ships and boats.

This was the 11540 project (Hawk). He was very successful. With a full displacement of all 4000 t he carried powerful and versatile weapons. The anti-submarine complex exceeded in its capabilities the weapons of the former TFR. It consisted of the Zvezda-1 State Joint-Stock Company, the Vodopad-NK compact and powerful missile-torpedo complex, the RBU-6000 jet-bombing installation and the Ka-2 anti-submarine helicopter, which had a permanent base on board . The air defense complex consisted of the multi-channel self-defense air defense system “Dagger” (a sea-based analogue of the ground complex “Thor”) and two rocket-gun installations “Kortik”. The strike weapons consisted of 27 Uran anti-ship missiles. The 16-mm ship armament was complemented with the AK-100 universal gun mount. By its combat capabilities, this ship exceeded all foreign counterparts (frigates by Western classification) and was one of the most advanced for its time. Unfortunately, because of the catastrophe that befell the USSR, only two ships of this project were completed: the Fearless and Yaroslav the Wise. Today they are one of the most modern ships of our fleet. And it was the ideas embodied in the project “Hawk” that formed the basis of the 100 project. But initially it was not intended for our fleet.

Why was the project strictly export? This is due to the situation in the military shipbuilding program in the 80-s. Paradoxically, but it lacked the further development of patrol ships with a displacement of 3 – 4 thousand tons. Then the military science existed mainly to justify the correctness of the "wise superior instructions." And only thanks to the personal active participation of the ascetic of the Russian fleet — the commander-in-chief of the Navy, Admiral of the fleet of the Soviet Union, Sergey Georgievich Gorshkov — our fleet received a new class of ships. True, Sergei G. resisted classifying them as frigates - in the Western style. Although in fact - it is frigates. But Sergey Georgievich followed his principle: “We have our own distinctive national way. We do not copy foreigners! ”He managed to convince the country's leadership of the need for the 11540 project. However, it was a project Zelenodolsk PKB. Unfortunately, the Northern PKB created its own frigate project after the collapse of the Soviet Union and in the interests of a foreign customer.

Since I had to say a word - I want to devote a few lines to Sergey Georgievich Gorshkov himself. His figure was in stories domestic fleet - great and ambiguous. He led the Navy's record-breaking 30 years. Perhaps he unnecessarily invaded all spheres of naval life and construction. This is always characteristic of large-scale government officials. And Sergey Georgievich, of course, was precisely the statesman. His book, The Sea Power of the State, has become recognized throughout the world by geopolitical work, which shows Russia's place in the world as a great power. It justifies the need for a strong fleet. And Sergey Georgievich devoted his life to his creation. Without a doubt, we owe him a rebirth of sea power, which our country had not had for a very long time before it. Here is a small quote from Gorshkov:

“History has clearly confirmed that without a strong fleet Russia could not be among the great powers. This was well understood by Peter I, who is rightly considered the founder of the Russian regular fleet. It was with the help of this fleet that the difficult, centuries-old struggle of the Russian people for the return of the outlets taken from it to the Baltic Sea was brilliantly completed. However, the lessons of this struggle against foreign invaders were not always correctly understood by the Russian autocracy, who often underestimated the possibilities contained in the power of the fleet, because of which Russia in many cases suffered damage. This was also facilitated by the constant, centuries-old propaganda by the states hostile to Russia, led by England, of the idea of ​​uselessness for a large continental power to have interests at sea. To make such propaganda persuasive, slander was widely used, as if the Russians were not a sea, but a land nation, that the sea was alien to them and they were not capable of navigation. This psychological, and sometimes, physical impact intensified after the fleet of Peter I equalized its power with the English fleet, in which the English bourgeoisie saw an attempt on its self-proclaimed right to be the "ruler of the seas" ... It must be admitted that a long hostile for Russia propaganda found support among influential satraps of the Russian Tsarism, who in every way impeded the construction of the fleet and sought to reduce the cost of maintaining it in the necessary readiness. The narrow thinking of high-ranking royal minions did not pass without a trace. Their reactionary ideas of opposing the fleet of the army and misunderstanding that the strength of the country's armed forces depended on the coordinated development of both components of a single organism, caused for a considerable time a significant damage to the country's defenses. ”

... After Gorshkov left, the sad fate awaited the construction program of the Hawks. For various reasons, not excluding the "human factor", the series of these ships was seriously reduced. And the laying of the headless TFR “Fearless” fell on the era of “perestroika” and “acceleration”. Perhaps that is why it was transferred to the fleet only after 6 years from the moment it was bookmarked. And his brother, Yaroslav the Wise, founded in 1988, broke all records of protracted construction and was transferred to the fleet only in 2009. The third building, built in 1993, is likely to be completed. But already on the modified project, since by the 2000 years the production of many 11540 project systems was lost.

Nevertheless, after more than two decades, the domestic fleet will receive universal middle-class ships - frigates. We were very lucky that, thanks to Indian orders, we managed not only to bring, but also to master the 11356 project in the series. Mastering the 22350 project in a series of ships (which is also classified as a frigate, although its combat capabilities will significantly exceed those of previous generations) will take time. First of all - to bring new weapons systems. And you need to update the fleet. And the frigate of the project 11356 is the best suited for strengthening the combat strength. At the moment it is quite a modern and high-quality ship. He will occupy a niche in the fleet that has not been filled for more than two decades.