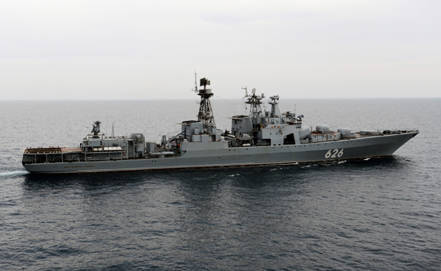 The inter-naval grouping of the Navy consisting of ships of the Black Sea and Northern Fleets went on a long voyage to the Atlantic Ocean, during which it will conduct exercises and work out interaction with the strategic aviation Air Force and Submarines of the North fleet, a spokesman for the General Staff of the Navy said on Tuesday.


At the end of the transatlantic crossing, the ships will visit Cuba, Nicaragua, Venezuela, and after the return crossing - Cape Verde off the west coast of Africa, ITAR-TASS reports.

“The purpose of the campaign is to demonstrate the St. Andrew’s flag, fulfill the tasks of military service in the distant ocean campaigns, strengthen cooperation with the Navy of Latin America and Africa,” said a spokesman for the headquarters.

Initially it was planned that the inter-fleet grouping would be formed from ships of three fleets - the Black Sea, Northern and Baltic. However, according to the received order, the Yaroslav the Wise patrol ship planned for inclusion in it went to the Atlantic in June to perform combat service in the far ocean zone, where it continues to perform its tasks, after which it will return to Baltiysk. "Thus," Yaroslav the Wise "in the countries of Latin America will not go," - said the representative of the General Staff.

He noted that the ships of the Black Sea Fleet from the inter-fleet grouping had in fact already gone on a march. Today "Ivan Bubnov" came out of Sevastopol, who set a course for the Black Sea straits. “On July 3, the missile cruiser“ Moscow ”will leave Sevastopol, accompanied by sea-going tug MB-304. The Black Sea ships, passing through the pouring zone, will proceed to the western part of the Mediterranean Sea, where the Vice Admiral Kulakov will join them. Then the group forces the Strait of Gibraltar and will go into the Atlantic. ”

According to updated data, 13 – 16 July Russian ships will visit the Portuguese port of Lisbon for the rest of the crews and resupply. Then the group will begin the transatlantic transition, during which it will conduct exercises to combat surface, underwater and air enemy. “It is necessary to work out the interaction of the grouping with the strategic rocket carriers of the Air Force and the submarines of the Northern Fleet. The ships will carry out rocket and artillery firing, naval aviation helicopters will fly from their decks, ”the agency’s source said. In particular, the cruiser "Moscow" will apply its main shock weapon - supersonic anti-ship cruise missiles "Vulkan". The Vice-Admiral Kulakov will also fire with rocket and artillery weapons.

At the end of the crossing, the ships will visit with business visits the port of Havana, Corinto (Nicaragua), La Guaira (Venezuela). Water, fuel, food will be replenished, and Russian crews will be guests of the sailors of these Latin American countries.

After that, at the end of August, the Navy ships will begin a reverse transatlantic transition to the African continent. In the first half of September, they will call at the port of Praia (Cape Verde). Then the group will go to the Mediterranean Sea and at the end of September will make a business call at the Spanish port of Ceuta. After the visit, the ships will spend some time in the Mediterranean Sea, performing the tasks of combat service. “The ocean march of the inter-fleet grouping will end in mid-October,” the representative of the headquarters summed up.

Ctrl Enter
Noticed oshЫbku Highlight text and press. Ctrl + Enter
We are
Missile cruiser of the Russian Navy instead of Cape Verde sent to the MediterraneanLanding ships of the Russian Navy will go to Syrian Tartus
10 comments
Information
Dear reader, to leave comments on the publication, you must to register.