July 4 2013
217
Someone Zuckerberg from Facebook led a group of 700 employees from his firm at the so-called gay parade in San Francisco. As for the Russian pederasts, they certainly envy their overseas partners. After all, our domestic fagots are also people, and they also want to put on feathers and march at the parade. But the authorities have not given a go-ahead for this rainbow share for already one year. Homosexuals, holding a grudge, have already compared such a refusal almost with the introduction of the memorable 121 article, and the most advanced, having tinted their lips, occasionally go to unauthorized "blue" parties, knowing that they will fall into the tight embrace of riot police. Perhaps this way they also get some satisfaction ... Especially for the "AN" to the question: "Why is the parade a pederast?" Are answered ... 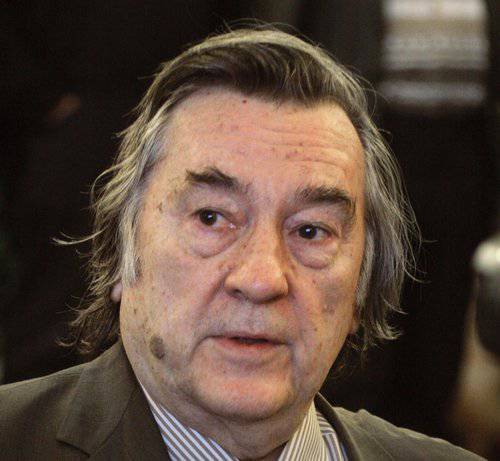 Alexander Prokhanov, writer:
“All our television is filled with homosexual expansion”

- This is a very sublime and difficult question ... As a rule, parades are organized to demonstrate the strength and power in honor of all kinds of celebrations and victories. When the homosexuals gather, they so affirm their greatness, significance, and their victory over the non-advance.
Igor Rostislavovich Shafarevich said that the homosexuals are the minority, the small people, who, thanks to their unity, want to establish power and dictatorship over the great people, that is, over humanity.
Now we are present at the process of creating a world dictatorship of homosexuals. By the way, when a large number of homosexuals gather on the square, this is called a sado rally ...
Such open activity and expansion must be declared illegal. In Stalin's times, bestiality was considered a crime, and they were shot for it, although I think it was too harsh.
This activity should be continuously pursued at the legislative level, which, by the way, is happening to us with some delay.
Of course, there should be a ban on their propaganda in the media, because all our television is somehow filled with this homosexual expansion. If there is a state will - the will of the Minister of Culture, the directors of the channels, as well as public protests, then they will determine their borders.
This should be openly spoken and openly confronted by this! And they must be ridiculed. There are many forms of counteraction ...

Valery Belotserkovsky, producer, head of advertising and production center "Megapol":
"When the country zafederastyat, it will be much worse!"

- When a person is flawed, he really wants to translate this flawedness into a certain dignity. But they are engaged in self-deception and they want the whole world to go nowhere.
We zapetrosyanili the whole country - it's scary, but not fatal, and you can get out of this. But when the country zafederastyat, it will be much worse!
Thank God that we are somehow trying to fight this! In order to preserve the nation, the position of the state must be tough.

Alexander Rukavishnikov, sculptor, academician of the Russian Academy of Arts, People's Artist of Russia:
"And how cunningly they came up with ..."

- At parades they are promoted. Any product must be sold before sale.
And how cunningly they invented: the one who opposes their expansion is immediately recorded in “fascists”, “racists”, etc.

Vladimir Soloviev, TV and radio host:
"Of the Christian countries in this confrontation, we can remain the last ..."

- They need a parade in order to show the whole world how they defeated Christian morality. I think we will not be alone in confronting them, because there are also Muslim countries. But from the Christian countries in this confrontation we can remain the last ...
The end of European Christian civilization will come at a time when the gay parade will be held on St. Peter's Square in the Vatican.

Arkady Inin, writer, screenwriter, Honored Artist of Russia:
"... we, that is, the authorities, must file counterclaims"

- I believe that the so-called gay parades in our country are not needed and even harmful. It should just be banned. And if their supporters will sue, then we, that is, the authorities, must file counterclaims.

Natalya Krachkovskaya, People’s Artist of Russia:
“Why should I show off my sores?”

- All this is against nature! This is unnatural, and you can’t even talk about it! I understand that someone has such a disease, but why show off their sores?
But now, you see, it is fashionable ... All this filth! .. Now there is so much freedom that they themselves do not know where this freedom to apply!
Flog them with whips - that would be too much, but what exactly they should not be allowed to do is to demonstrate their unnatural inclinations. Well, it is impossible to talk about it openly! All this is against nature, and she avenges such things ...

Ctrl Enter
Noticed oshЫbku Highlight text and press. Ctrl + Enter
We are
"Who are you," Shooter "?"A.A. Prokhanov on Echo about Berezovsky, Navalny, the hero of labor, about Bashar Assad, about Syria, Libya, Korea
Military Reviewin Yandex News
Military Reviewin Google News
217 comments
Information
Dear reader, to leave comments on the publication, you must to register.