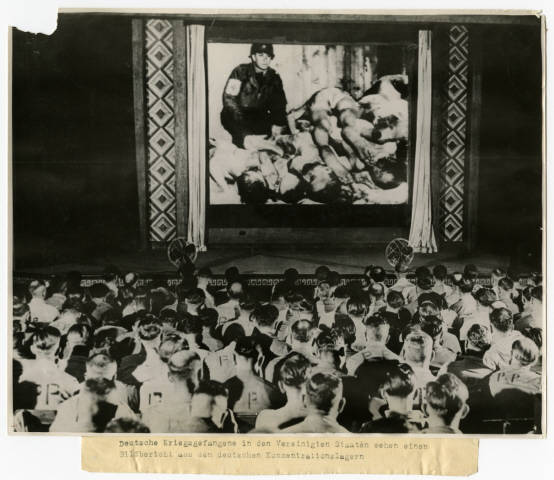 After the defeat of Nazi Germany, the American occupation authorities for 10 years carried out denazification. In addition to ships, executions, lustration, the United States beat out totalitarianism from the Germans by violently showing a movie about the horrors of Nazism, as well as the work of gravediggers. It was impossible to refuse.


The USA and the USSR were consistent supporters of the harshest treatment of the defeated Germans. On the contrary, England and France first opposed the excessive punishment of Germany. So, declassified less than a year ago, the British archives showed that at the end of World War II, Churchill and his government objected to the creation of the International Military Tribunal, because, in their opinion, in this case, some Nazi leaders needed to be executed, and others - sent to prison without trial.

As stated in the records, Churchill put forward this proposal at the Yalta Conference held in February 1945, but he was rejected by Franklin Roosevelt, who believed that the American public would insist on litigations, and Joseph Stalin, who believed that public trials could be excellent tool propaganda.

Ultimately, the British agreed to war crimes trials, despite the fears of some high-ranking British government officials who believed that the decision to judge the surviving Nazi leaders for unleashing an aggressive war could be a dangerous precedent. They also feared that these courts would be similar to resonant demonstration lawsuits in Stalinist Russia.

However, the British had to give up the allies, and also take up the denazification of Germany. Already in the first days after the surrender, those who occupied party posts were arrested and sent to strictly isolated camps, starting from the head of the department, cadres of the SS, Gestapo, SD and assault detachments, regardless of their position, the heads of the Nazi organizations such security guards of concentration camps, etc. — the detailed list of posts contained a manual with the notable name “Automatic Arrest”. Their total number in the English occupation zone was about 90 thousand people, in the American one - over 100 thousand, in the Soviet 120 thousand. 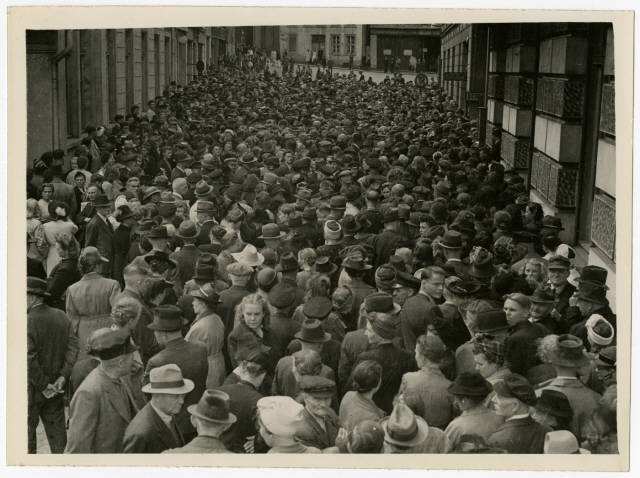 After initial approval, the population was growing dissatisfied with the denazification practice in general, and in particular with the questionnaire consisting of the 131 question that every working German was supposed to fill out. Although the British and French acted not too strictly, but in their zones this procedure was delayed.

A grocery card was issued only upon presentation of a receipt confirming the delivery of the questionnaire to the town hall (which emphasized the "Law ..." in the fourth article titled: "The receipt of the questionnaire is an important document"). Also, living in a settlement and employment in an institution or in a private enterprise (and following the admission of continuing work until the moment of dismissal) required the presence of the mentioned receipt.

In the case of illegal residence, the apartment’s deliverer was subject to serious sanctions. Specially stipulated punishments with imprisonment or a fine for false data in the questionnaire and evasion of registration.

But those who escaped prosecution had to forcibly "denazifitsirovatsya." Re-education began in some cities and villages with shock therapy, the effectiveness of which, however, was considered dubious: the population was forced to inspect a concentration camp in their area, showed “voluntarily-forced” viewers a documentary about the death-camps destruction camps. Political analyst K. Vasmund wrote: “Denacification and re-education, according to the original plans of the Allies, have the same close mutual relationship as the piston and cylinder of a car ... the Germans, through the press, radio, movies. " 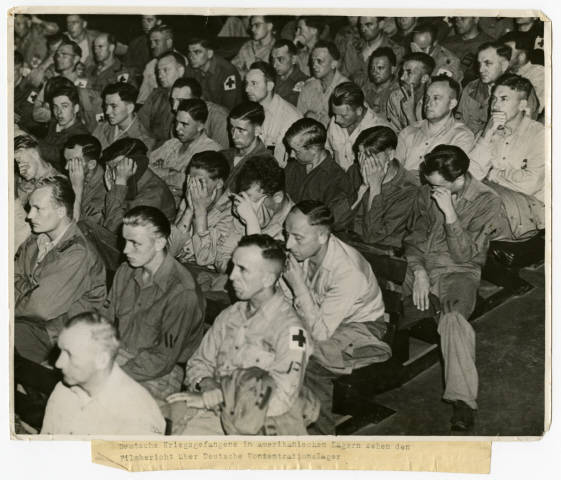 Immediately after the arrival of the troops of the victorious countries, all newspapers and radio stations, with the exception of allied military ones, were banned, schools and higher educational institutions were closed. The first American newspapers for the Germans were issued by the army department of psychological warfare; it was planned to keep in their hands the publication of newspapers until politically pure conscientious German publicists were found.

Screening of films was not just like that. For example, in the Soviet and American zones of occupation, the administration issued ration cards for products only to those who had a mark about watching a movie. In cinemas put such marks.

The three photos above show how watching films about the horrors of the Nazis made by allied propagandists.

Propagandists sometimes did not even disdain fakes. An example of such a fake was described in the English Catholic Herald (Catholic Herald) of 29 in October 1948.

It said that in the city of Kassel, where every adult German was forced to watch a film about the “horrors of Buchenwald,” a doctor from Göttingen saw himself on the screen, although he had never been to Buchenwald. It turned out that this was a film shot after the bombing of Dresden on February 13, 1945, where this doctor was then located. After that raid by the Anglo-American aviation 130 thousand people died, most of them women and children, refugees from the eastern regions. For several weeks after this, the bodies of the dead were burned in piles. These scenes were filmed by German military cameramen, then the tapes fell into the hands of the allied propagandists and they put them into action. But the winners were sure that even fakes go for the good of the vanquished, knocking out “Nazi nonsense” from those.

Another punishment was the burial by civilians of those who died in concentration camps. The allies took “ordinary Germans” to mass grave sites, and they dug corpses from common graves all day long to bring them to the ground humanly (the allies also needed this work to systematize the victims of Nazism). It was believed that for women through such work, “denazification” should have at least 5 working days, for men - 10. The most poisoned by Hitler's propaganda could work on the reburial of a month or two. Below in the photo you can see how this process went: 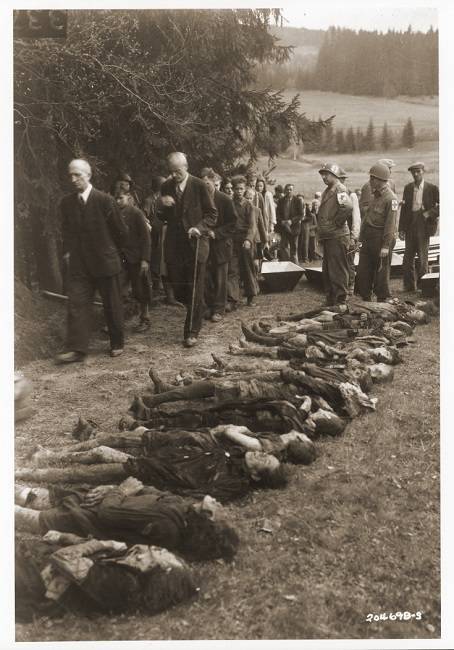 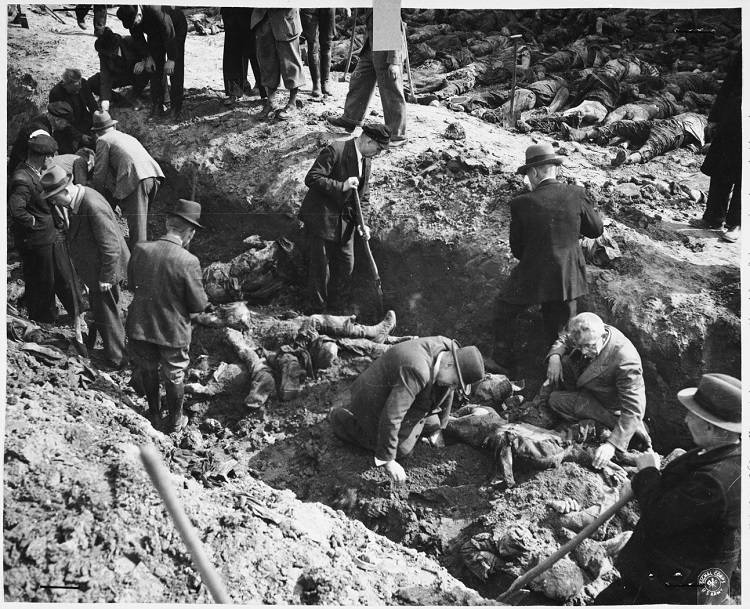 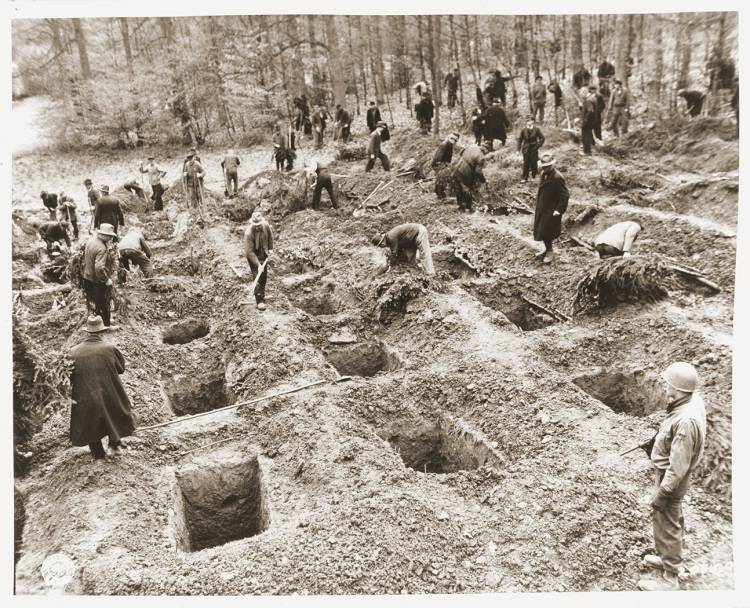 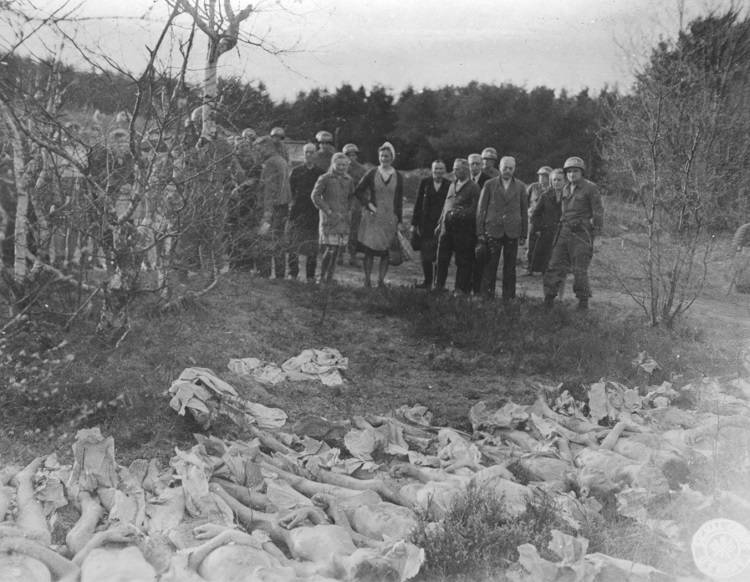 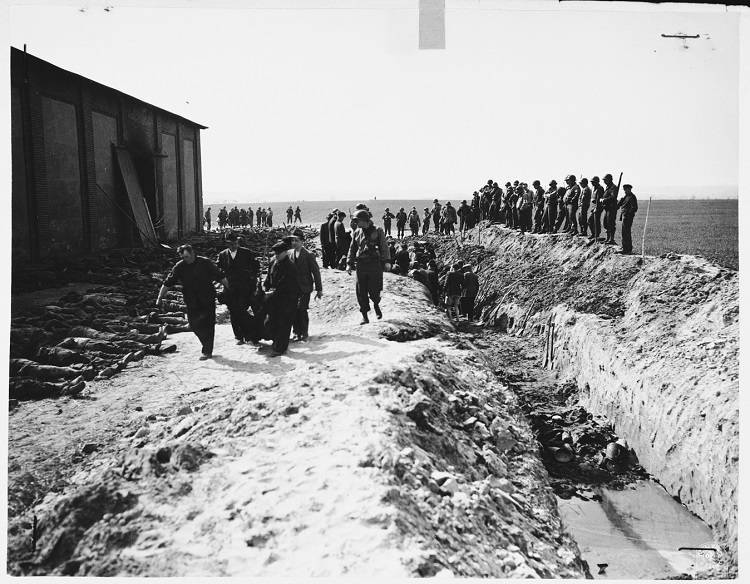 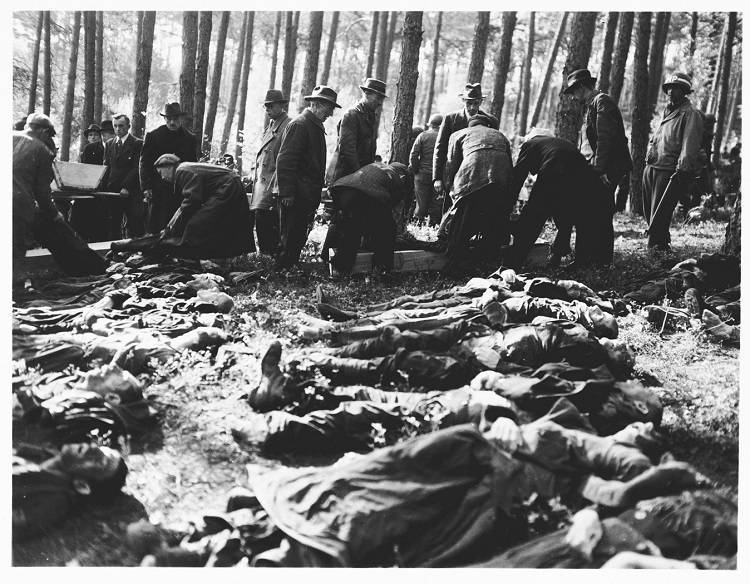 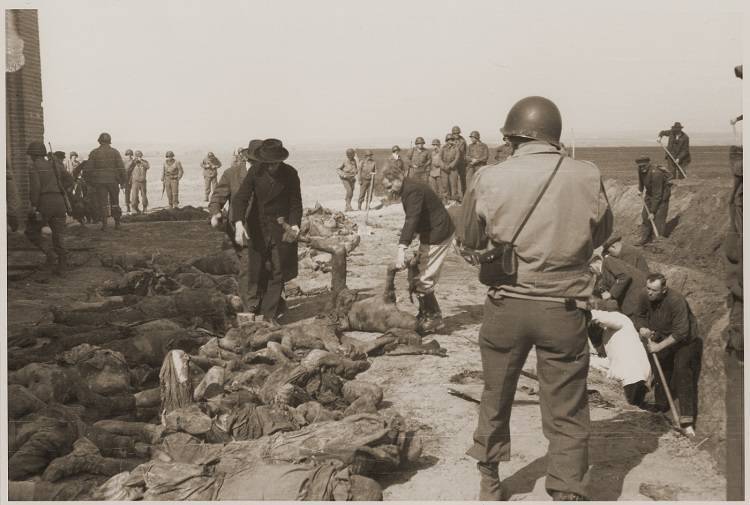 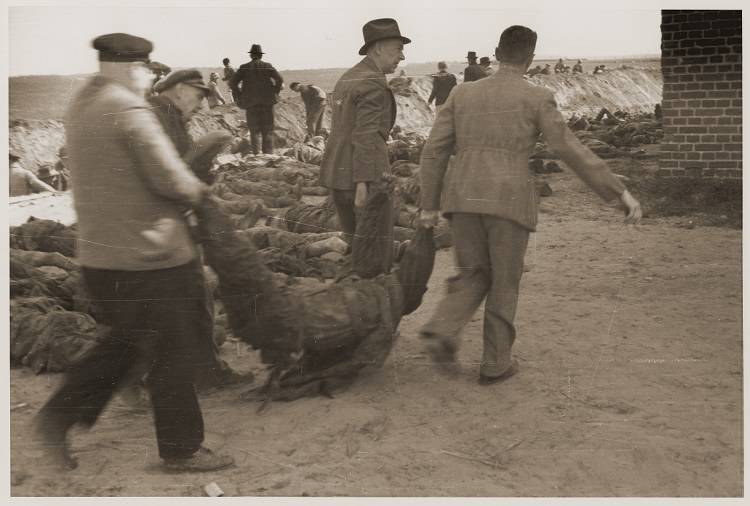 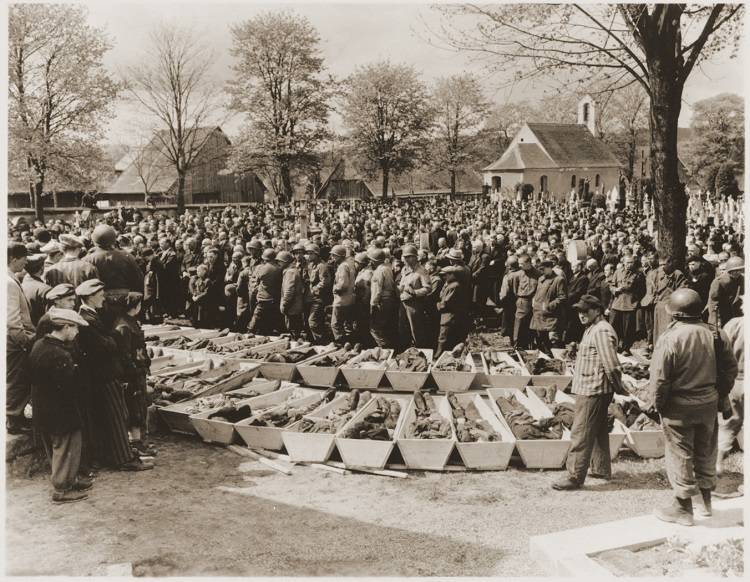 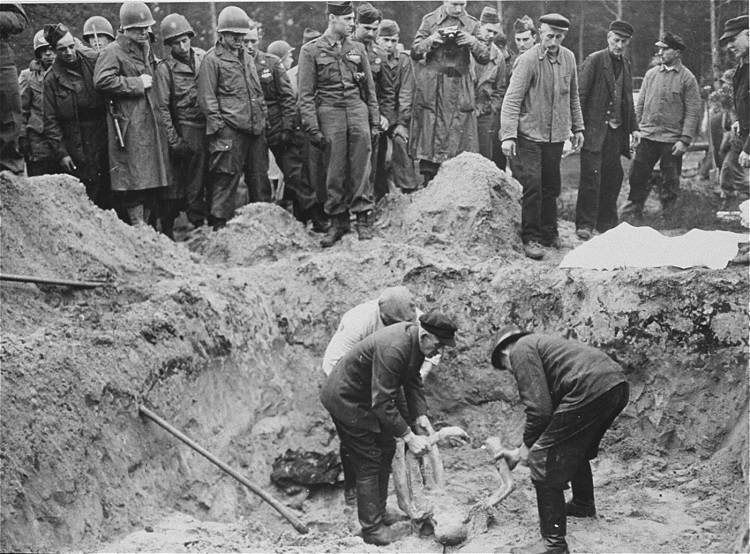 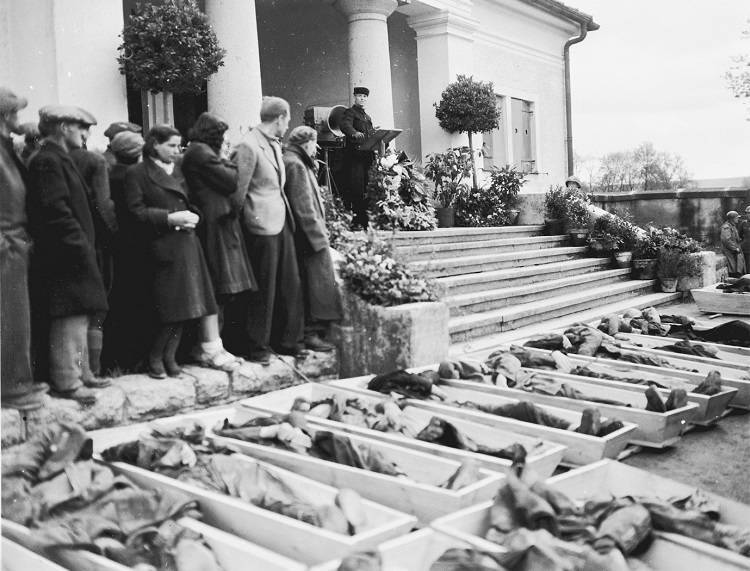 Ctrl Enter
Noticed oshЫbku Highlight text and press. Ctrl + Enter
We are
Diplomats of the People's Commissariat of Defense: on the eve and during the warRedistribution of world maps and spheres of influence. 1945 International Conferences of the Year and Intelligence
Military Reviewin Yandex News
Military Reviewin Google News
113 comments
Information
Dear reader, to leave comments on the publication, you must to register.