July 4 2013
22
Gunsmith designers have always dreamed of developing such a system weapons, which allows us to destroy as many enemies as possible in one sitting of seven losses, and if there is only one enemy, then without bothering with an exact sight, quickly cover the piece of the space where it is located with a dense stream of bullets. For all its undeniable merits, an automatic weapon still does not completely solve this problem. The authors of the published article went their own way, creating a special nozzle for rifled weapons and ammunition.


The proposed device can be used as an addition to a rifled small arms when using ammunition loaded with a bullet that has additional striking elements (hereinafter referred to as e). The combination of a bullet with dr. and a special removable nozzle should increase the area hit by a single shot - and hence the probability of hitting the target - with a sufficiently stable accuracy of hitting the dr, within the bullet's trajectory. In this case, the nozzle also provides a reduction in the muzzle flame and the sound level of the shot and does not exclude the possibility of firing a cartridge with a conventional bullet. This invention is protected by patents:

Before starting the presentation on the merits of the invention, it seems that it would not be superfluous to have some overview concerning the bullet itself.

It is known that the bulk of military weapons is made up of rifled complexes, in the ammunition of which an elongated bullet is used, acquiring in the rifled barrel the gyroscopic stabilization necessary for its stability on the trajectory. The latter is ensured by a certain step of rifling in weapons of various types and systems. At the same time, as the pitch increment increases, all other things being equal per unit of time, the initial speed increases and the number of revolutions of the bullet decreases around its axis. In this connection, a transition from gyroscopic to aerodynamic stabilization takes place. The latter is achieved by relieving the tail section of the bullet, placing lighter material in this part, or aerodynamic stabilizers. The optimal ratio of speed and stability of the bullet on the trajectory is one of the conditions for the effectiveness of small arms. However, there are other factors that reduce this figure. Therefore, the lack of accuracy of the shooter due to different conditions is compensated for by a large number of shots, thereby increasing the area coverage and the probability of hitting the target, while solving this problem with less ammunition consumption is confirmed by smooth-bore weapons, including the so-called “shotguns” (for example, experienced Samples of special purpose automatic shotguns “SPAS” chambered for an 12 caliber cartridge. However, a shotgun of a smooth-bore shotgun is effective only at a short range, the use of projectiles made up of thin arrows or flat rods, increase the range of damage slightly - in the literature indicated the distance to 100 m. Combined weapon systems, including rifled and smooth barrels having different ammunition with different target area, complicate their use.

Increasing the area hit by a single shot of a rifled weapon with a sufficient density of striking elements was traditionally tried to achieve in two main ways - by increasing the number of barrels (or channels drilled in the body of one “barrel”) with firing a volley or increasing the number of bullets in one cartridge (from 2 to 10) with shooting them all in one shot. There are many examples of this. However, multi-barreled or multi-channel weapons are too cumbersome. The creation of ammunition for rifled weapons that have several damaging elements - for example, a “duplex bullet” - cannot provide a sufficient area of ​​damage by elements that sequentially leave the barrel. In some prototypes of multi-bullets, forced dispersion (“dilution”) was applied at the expense of bevels on the ends of the bullets.

The proposed version of the ammunition can also be made in the dimensions and limits of the power of regular rifle ammunition, but filled with a bullet, in the tail of which there are four dl. cylindrical shape with the possibility of release from the bullet when departing from the barrel due to centrifugal force. Thus, the ammunition provides with one shot an increase in the area of ​​destruction. D.e. placed in intersecting longitudinal notches of the bullet so that they have the possibility of some parallel movement relative to the axis of the bullet, joint rotation with it and around its axis. A reservation is needed here. The DPE, like the bullet, stabilizes due to the gyroscopic effect. To do this, as well as to avoid deformations of the cuts when the bullet moves through the barrel bore, its tail part has a diameter corresponding to the caliber of the barrel in the fields, and the leading head is caliber in the cuts. When moving along the bore, the bullet, rotating, transmits the translational and angular velocity of the d.c. Each axis rotates around its longitudinal axis faster than a bullet as many times as its diameter is less than the diameter of the bullet, acquiring, respectively, greater gyroscopic stability. However, the magnitude of the deviation. from the trajectory is directly proportional to the angular velocity of rotation (the more so that the bullet and the dp rotate in opposite directions). Therefore, to reduce it, you should increase the pitch of the rifling. At the same time, it is impossible to discard the fact that with a decrease in the angular velocity, the gyroscopic stabilization of all the firing elements decreases. Bullets in this case it concerns less, because at the expense of lightening the tail section after separation of a dps it also gains aerodynamic stabilization. In this case, when determining the pitch of the rifling, it is necessary to calculate its value based on the condition of stabilization of the dp, on the trajectory.

Thus, using the described bullet in a standard weapon without some of its design changes is ineffective. It is proposed to supplement the weapon barrel with a device in the form of a muzzle attachment that performs several functions simultaneously: stabilizing the trajectory of the shot elements in the desired direction, reducing the flash of the muzzle flame, a slight decrease in the sound level of the shot. Note that multifunctional muzzle devices are quite common in small arms (the flame arrester-compensator-muzzle brake of the AK 74 assault rifle, detachable chok is the flame arrester for smooth-bore guns, etc.). Moreover, the proposed nozzle does not complicate the use of the cartridge with a conventional bullet. 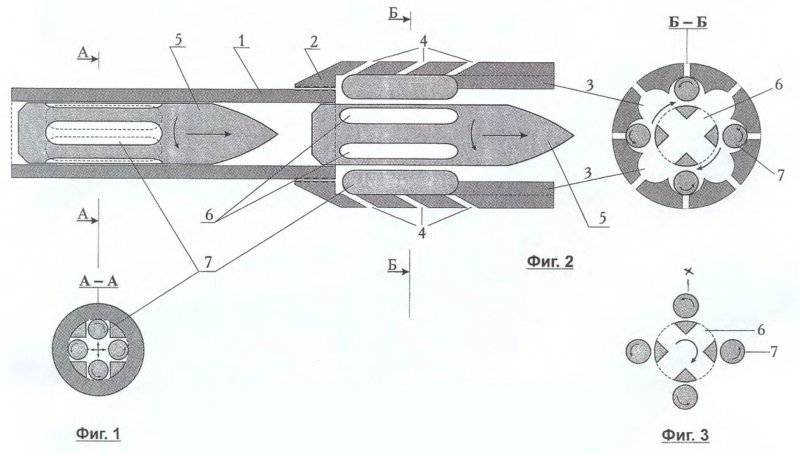 The essence of the device can be understood from the accompanying drawings. In Fig. 1, the barrel (1) is shown, in Fig. 2 - a muzzle head (2) of cylindrical shape, on the inner surface has eight smooth grooves (3) with through channels (4), made at an angle to the axial line. In FIGS. 1 and 2, you can see a bullet (5) as it moves along the bore channel (1) and in the nozzle (2). In the tail section, the bullet has intersecting longitudinal notches (6), which contain four d.s. (7). Bullet and dr. - body rotation. The ratio of their masses can be differentiated when using different materials. Bullet position and dps shown: a section along the "A-A" - at the beginning of movement along the bore; “bb” section - when the bullet is moved from the barrel bore (1) to the muzzle (2), and in FIG. 3 - after departure from the muzzle. The arrows indicate the direction of the rectilinear motion and rotation of the bullet, etc.

When moving from the bore (1) under the action of the powder gases, a bullet (5), moving its part with the cc located in it. (7) into the muzzle nozzle (2), due to the action of centrifugal force, is released from them. D.e. move to the gutters (3) in the section of the through channels (4). The number and multiplicity of the excess gutters (3) in relation to d.s. (7) determine hit by d. in the gutters with exactly equal angular distance between them. The advancement of a bullet from the barrel bore into the muzzle nozzle opens the way for gases to the nozzle, where they expand in all directions. This contributes to a stable movement. along the grooves, which in the areas of the through channels, due to the greater pressure of the powder gases in the cavity of the muzzle head, neutralize the “rebound” of the dye that arose during their contact with the surface of the grooves as compared to atmospheric. This preserves the stability of the movement. on the inner trajectory parallel to the pool and as an after-effect - after departure from the muzzle nozzle. At the same time, there is some slowdown in the rate of flow of powder gases from the muzzle nozzle (2), due to the change in their direction and dispersion through the through channels (4) and grooves (3), and also following the striking elements (5 and 7) contributing reduce flash and reduce the sound of the shot.

Taking into account the gyroscopic stabilization of the dpc, their calculated location in smooth trenches with equal angular intervals between them, it should be assumed that the deviation of the dp from the trajectory of the bullet will not exceed the permissible standards for rifled weapons and significantly exceed the smooth-bore weapon in accuracy with the presence of conditions that reduce the unmasking signs of the shot.

The theoretical basis and practical reproduction on the stand of the action of the bullet and its D. p. through the muzzle head allowed us to make the definition noted above. 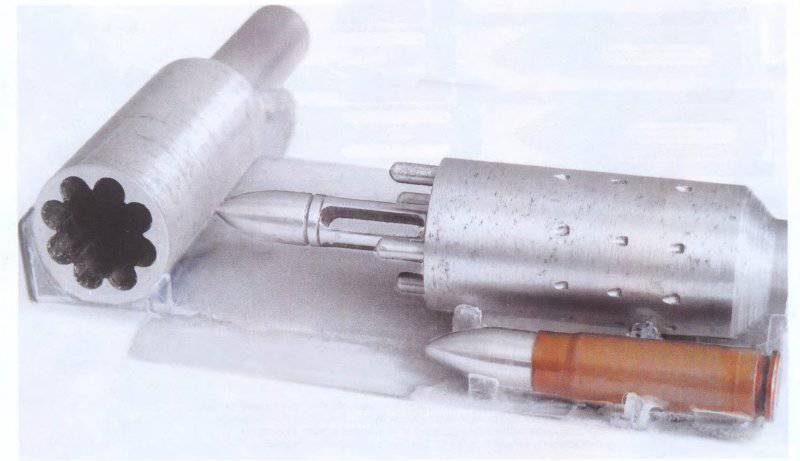