Dmitry Rogozin: Extremely hard conclusions will be drawn from the crash of the Proton-M launch vehicle 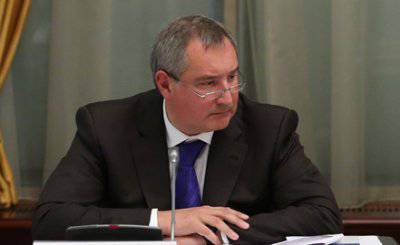 Extremely tough conclusions will be made from the Proton-M launch vehicle crash: the rocket and space industry will develop in a fundamentally different way. Deputy Prime Minister Dmitry Rogozin told reporters about this.


"The conclusions will be made extremely tough in this situation, and they will be associated not only with the search, so let's say, the guilty, or the guilty, they will affect a number of more complex problems," Rogozin said. "In the form in which the rocket-space now exists Russian industry, we will not move further. "

Rocket and space industry will be reformed

Russian President Vladimir Putin has created a special commission to reform the rocket and space industry, headed by Deputy Prime Minister Dmitry Rogozin. This was told by the Deputy Prime Minister himself. "This commission will have to prepare a draft decision of the president on reforming the rocket and space industry," he said. Rogozin, adding that her first meeting will be held on Friday.

"The principles of reforming are as follows: within a single integrated structure, this is not a state corporation, but most likely it will be a joint-stock company, the conventional name of a rocket and space corporation, with the transfer of all state-owned shares that are currently under the jurisdiction of separate rocket and space enterprises industry, "- said Rogozin.

According to the vice-premier, such a reform will require consolidation of the industry. In particular, in order to create a joint stock company, it is necessary to transform all FSUEs into joint-stock companies and carry out an in-depth analysis of all the property that is in charge of these enterprises.

Rogozin added that after that "a unified technical policy will be carried out," in particular, the product range is sharply narrowed due to the universalization of technical solutions, which should lead to a decrease in emergency situations.

As for the launch infrastructure, then, according to the vice-premier, at Baikonur, Plesetsk and at the future Vostochny space center, it will be located within the framework of the preserved and strengthened federal space agency.

The first conclusions about the Proton-M accident are possible in two days.

According to Rogozin, telemetry data on the crash of the Proton-M launch vehicle are expected within two days.

"In general, we expect to receive telemetry, which can be used to draw the first conclusions about the causes of the accident within two days, that is, until tomorrow evening," said the Deputy Prime Minister.

Rogozin noted that the main danger was "a certain chemical cloud of nitric acid." However, according to him, the weather saved the situation - it was raining, and this cloud could not spread far. Rogozin said that the launch complex remained intact, since the rocket fell about 2 km from it.

Earlier, Kazakhstan’s national space agency, Kazkosmos, reported that toxic fuel components, heptyl and amide, were not detected at the Baikonur cosmodrome and the adjacent territory.

The Proton-M rocket with three Glonass-M devices launched today from the 81 site of the Baikonur cosmodrome at exactly the appointed time - at 06: 38 Moscow time. However, almost immediately after separation from the launch pad, the rocket sharply deviated from the flight path, after which it fell near the launch site and exploded.

The Investigative Committee of Russia began pre-investigation verification of the accident. 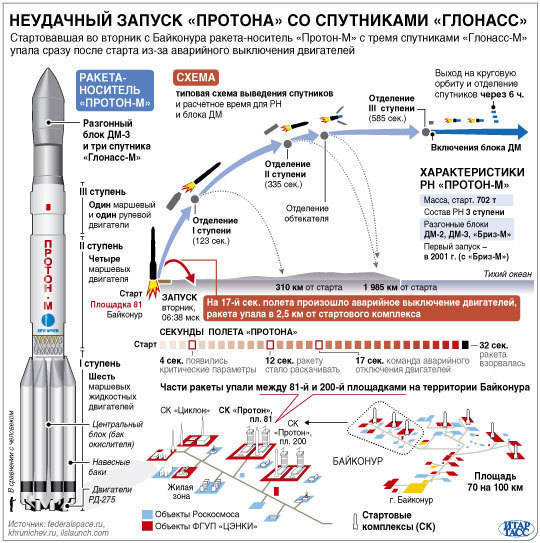 The State Commission will ensure the objectivity of the investigation

This afternoon, Russian Prime Minister Dmitry Medvedev instructed Rogozin to form a government commission to establish the causes of the Proton-M accident with three Glonass-M vehicles, and demanded that a list of those responsible for the incident be presented.

Rogozin recalled that in such situations the state commission, which is formed within the framework of Roskosmos, always works. "Today, in the first minutes after the accident, it was created. However, considering that the accident caused a great response and, of course, requires close analysis of the causes of this kind of technical failure and dramatic consequences, the President of the Russian Federation decided to create a special commission headed by your humble servant because only a government commission can provide a second key, that is, an objective analysis of what happened, "the deputy prime minister said, stressing that, unlike Roscosmos, this body can be a decision on the degree of responsibility of the officials from the industry or government customer, which were directly related to the accident.

Ctrl Enter
Noticed oshЫbku Highlight text and press. Ctrl + Enter
We are
Proton vs. Falcon: the battle for the right to be a space cabRussian space: glorious past, difficult present, uncertain future
Military Reviewin Yandex News
Military Reviewin Google News
195 comments
Information
Dear reader, to leave comments on the publication, you must to register.