GCV program and its alternatives 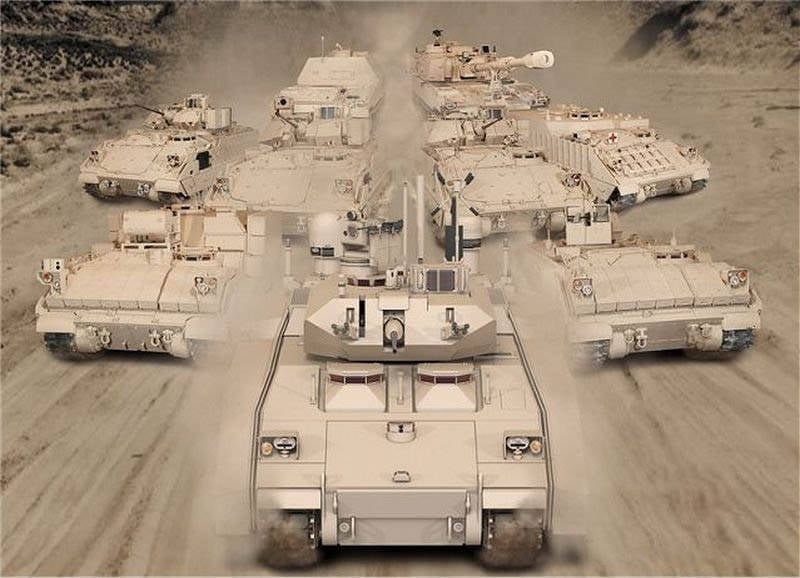 The United States is currently developing the ground combat vehicle GCV (Ground Combat Vehicle). For the new technology, there are rather high requirements, the fulfillment of which forces developers to apply new technical solutions uncharacteristic of previous infantry fighting vehicles. The use of non-standard solutions entails the need for additional research and design work, which directly affects the cost of the entire program. In this regard, there are proposals to save on the new GCV program and provide the armed forces with a decent fighting vehicle.

Requirements for a promising BMP boil down to four main points. It is the combination of these four qualities, according to the Pentagon, that will help provide the army with modern equipment, ready to work in the conditions of a modern war. From the GCV machine is required:
- Vserakursknaya protection against various threats, such as small weapon, small-caliber artillery, anti-tank grenade launchers / missiles and mines of various types, including improvised. A prospective BMP must withstand not only the entry of ammunition or the detonation of an explosive device, but also be able, after sustaining some damage, to continue combat work;
- combat effectiveness. This means firepower sufficient to attack a large range of targets, from manpower to lightly armored vehicles and fortifications;
- high mobility on the highway and in off-road conditions;
- troop compartment for nine soldiers with weapons and equipment. The own crew of an infantry fighting vehicle GCV in this case should consist of three people.

It is easy to see that none of the armored vehicles currently available in the American army meet such requirements. For example, M2 Bradley infantry fighting vehicles are capable of carrying only seven paratroopers and cannot protect them from weapons more powerful than small-caliber or small-caliber artillery. In addition, in accordance with the requirements of the past years, the side and aft armor of this machine is significantly inferior to the frontal in terms of protection, which accordingly affects combat capabilities in urban combat. Also in the context of the protection of the BMP "Bradley" should mention the lack of anti-mine tools. As for the armament of the M2 Bradley infantry fighting vehicle, in this parameter it almost meets the requirements for the GCV.

To date, the main technical requirements for the projects of the promising BMP of the GCV program have been determined and it is already possible to speculate about the specific appearance of this vehicle. So, the combat weight must be within 50-65 short tons (45-59 tons metric). It is necessary to enter anti-bullet and splinter armor and means of protection against anti-tank weapons within these limits. Behind the armor, the car must carry the airborne troop compartment and the complex of modern electronics necessary for communication with other infantry fighting vehicles and command. The armament of the GCV infantry combat vehicle, as required by the Pentagon, will consist of one 25 or 30 mm automatic cannon and a large-caliber machine gun paired with it. It is noteworthy that among the requirements of the military department there is also a point regarding remote control of armaments.

Based on the available information about the appearance of a promising BMP, one can draw appropriate conclusions about the cost of the entire program as a whole, and about the price of each car in particular. The specific requirements of the Pentagon, some of which have not previously been presented to the technology being developed, transparently hint at the complexity of the project, and this fact will entail corresponding financial consequences. Recently, the US military has been forced to cut costs and carefully evaluate projects for financial prospects. In this, the Pentagon is assisted by Congress and some of its administrations. For example, in April of this year, the Congressional Budget Office (CBO) published a report by The Army's Ground Combat Vehicle Program and Alternatives (“The GCV Army Program and its Alternatives”), which carefully considered the financial side of creating a new BMP and possible cost reduction methods.

In view of the impossibility of accurately predicting the final price of GCV combat vehicles, the Budget Office has taken up several alternatives for consideration, the cost of which is either known or can be determined on the basis of the data currently available. GCV competitors in the report were the new modernization project of the American BMP M2 Bradley, the Israeli heavy armored carrier Namer and the German machine Puma. As an alternative to all of these options, the CBO also considered the option of completely abandoning the new infantry fighting vehicle and maintaining the existing Bradley-type fleet. 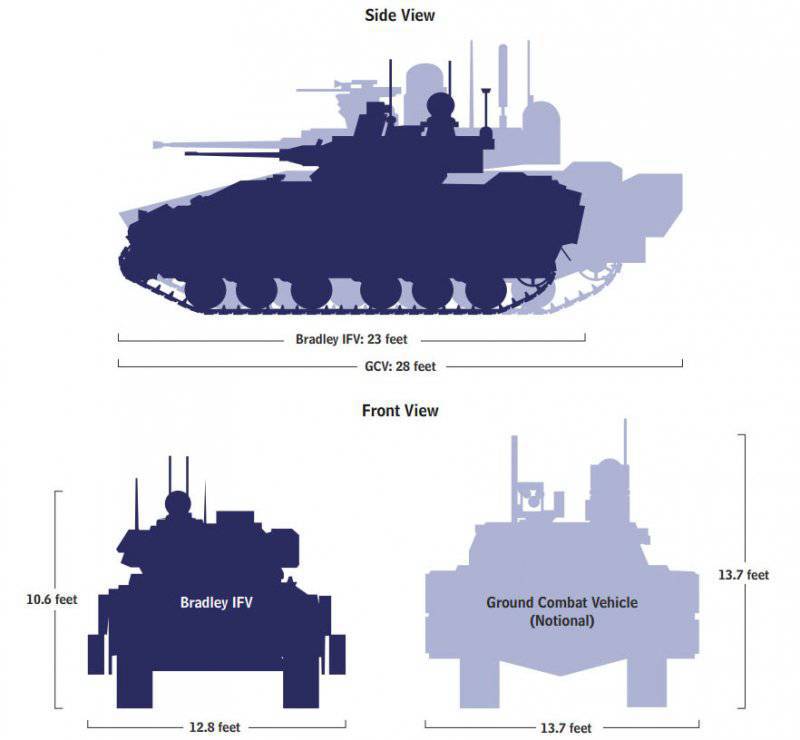 If the Pentagon chooses the latter option, then before 2030, the US Army will have a sufficient number of infantry fighting vehicles. At the same time, this technique will not meet some of the requirements for a promising infantry fighting vehicle, primarily in terms of the level of protection and the number of soldiers transported. In addition, the abandonment of the GCV program and any of its alternatives will only be a temporary solution, since the ground forces still need new armored vehicles and its development will simply be postponed for several years. Thus, the rejection of any existing programs to create a promising infantry fighting vehicle will only reduce costs without solving the existing technical problems.

The proposed modernization of the M2 Bradley BMP implies the installation of a new engine of higher power, additional reservation modules, as well as dynamic and active protection systems. In addition, there is a proposal that this combat vehicle should receive new surveillance systems and an additional machine gun caliber 7,62 mm. With such a modernization, according to analysts, Bradley’s combat effectiveness will increase by 60%. For such an increase in performance will have to pay. The entire program of upgrading or purchasing 1700 and more combat vehicles will cost the Pentagon about 19,5 billion dollars. Approximately 2,7 billion will need to spend on the development of the project, and the rest of the money will be spent on the construction of new BMP or retrofitting of old ones. One new car in this case will cost about 9,6 million dollars. 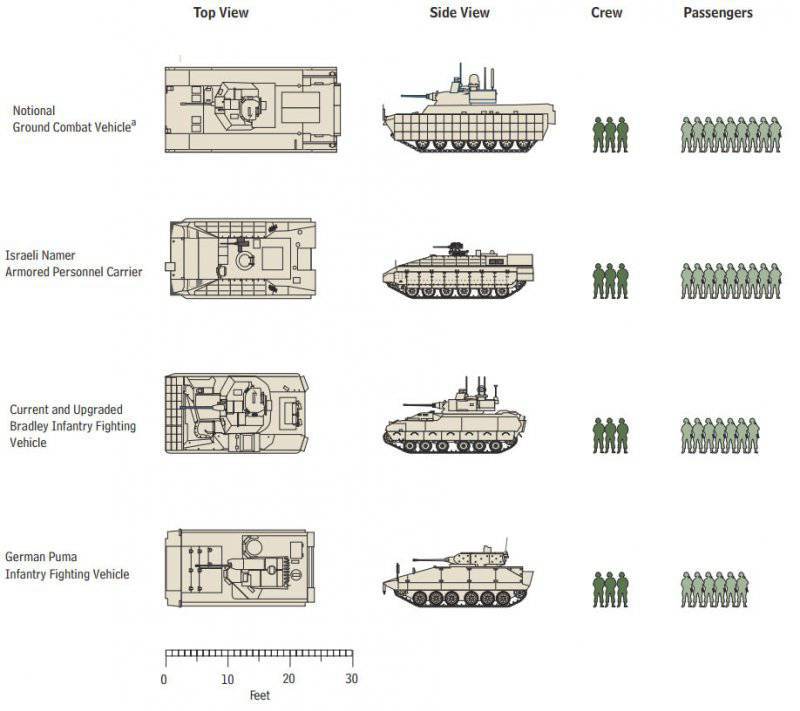 The M2 Bradley update has both advantages and disadvantages. The former include the comparative cheapness of the program (approximately 9-10 billions cheaper than the GCV project), the relatively short implementation timeframe due to the absence of the need to set up production, as well as lower risks that can affect the timing and the final cost of updating the fleet. However, this project is not without flaws. First of all, it is his compromise nature. It is unlikely that on the basis of an armored vehicle that does not fully meet the requirements, it will be possible to make a new BMP that fully meets all the wishes of the customer. An example of this is the size of the troop compartment. Even after the upgrade, the Bradley will not be able to transport nine paratroopers, as the Pentagon wants. In addition, additional booking over the native bulletproof will not be a complete solution to the problem of protection.

The Israeli Namer heavy armored personnel carrier is devoid of almost all the flaws inherent in the other vehicles discussed in the report. This armored personnel carrier was made on the basis of the main tank Merkava Mk IV, which accordingly influenced its main characteristics. Of all the armored vehicles budgeted by the Budget Office, Namer has the most serious protection and also meets the current military requirements regarding the number of soldiers transported. However, the Israeli armored personnel carrier is also the heaviest of the considered vehicles: depending on the configuration, its combat weight varies between 60-65 tons, and this greatly complicates the transfer of such equipment by air. In addition, in the current state, the Israeli armored vehicle has insufficient firepower, since it is equipped with only two machine guns of 12,7 and 7,62 mm caliber.

One Namer armored personnel carrier, according to the CBO, is worth 11 million dollars. However, despite the higher price compared with the M2 Bradley upgrade, the total cost of purchasing 1700 more than combat vehicles will be about the same - about 19,5 billion, which is noticeably cheaper than the GCV project. In this case, due to the relatively weak weapons, the Israeli armored vehicle has less advantages over the existing equipment. According to analysts, Namer will provide a reduction in infantry losses by a third, but at the same time, the ability to destroy enemy personnel and equipment will fall by 36%. Thus, the purchase of Namer armored personnel carriers will be an ambiguous step, giving no guaranteed benefits. Perhaps, it would be possible to reach an agreement with the Israeli defense industry on upgrading the combat vehicle and equipping it with a new armament complex, but this will certainly affect the cost of the project. 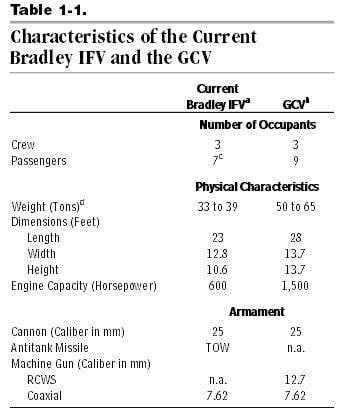 The planned GCV armament will include an 25 automatic cannon and a remote-controlled installation with a 12,7 mm machine gun. The landing is planned to increase from 7 to 9 people, which is considered an important requirement. Weight 50-65 short tons.

Another option for equipping troops with existing equipment is the purchase of a German Puma BMP. Due to the lower price, the Pentagon will be able to buy more than two thousand cars worth about 14 billion, which is significantly less than in the case of other options. Moreover, two thousand “Pumas” will cost the US budget about twice as cheap as the completion of the GCV program. In the future, due to unforeseen expenses, the difference in the price of programs is likely to increase.

However, the lower cost hides the corresponding problems with meeting the requirements. For example, the German BMP Puma is capable of carrying only six paratroopers, which is one and a half times less than their required number. In addition, the native booking of this machine provides protection only from bullets and shrapnel, although this disadvantage can be eliminated by installing additional booking modules. The existing cons of the German technology are also compensated by interesting fighting qualities. In the uninhabited tower "Pumas" mounted 30-mm automatic gun and 5,56-mm machine gun. It is also possible to install an anti-tank missile system. According to CBO estimates, the firepower of the German BMP is 103% higher than that of the American M2 Bradley in its current form. The reduction in personnel losses when using Puma is estimated at 28%, and the increase in mobility is estimated at 22%. The overall advantage of Puma over Bradley in all combat and technical characteristics is 45%.

All the options for reducing the cost of upgrading armored vehicles proposed by the Congressional Budget Office have a common characteristic. None of the armored vehicles reviewed in the report fully complies with the requirements for the prospective BMC GCV. For example, the Israeli Namer armored personnel carrier has the highest level of protection, but its weapons leave much to be desired. The German BMP Puma, in turn, is equipped with a good weapon system, but its troop compartment is one and a half times less than the customer requires. Finally, maintaining the existing state or upgrading the M2 Bradley infantry fighting vehicles will also not have the expected effect, since the main reason for the start of the GCV program was the fact that Bradley is not fully suitable for operation in the conditions of modern war.

Thus, at present, the program Ground Combat Vehicle simply has no alternatives. Probably, other infantry fighting vehicles of existing projects could compete with the one being developed, but the specific requirements of the customer actually leave them outside of a possible competition. As a result, the GCV program will continue and cost the Pentagon approximately 28 billions of dollars. For this money, the American army will receive modern infantry fighting vehicles adapted for conducting combat operations under various conditions and fully satisfying the military.