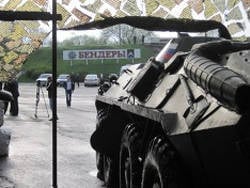 Moldova has signed a military treaty with Romania. Now, in the event of a war with Transnistria, the Romanian army will openly enter there, and the Romanian gendarmes will crush any protests against the unification of the two countries in Chisinau, Balti or Gagauzia. The only way for Moscow to avoid slaughter is direct cooperation with Tiraspol.


27 June 2013, the Moldovan Parliament ratified the agreement on military cooperation with Romania. Reportedly, the main thing in the agreement that passed the first reading is the creation of a legal basis for the permanent presence of Romanian troops in the Republic of Moldova. Earlier, Chisinau and Bucharest signed a document stating that the Romanian gendarmerie can get access to the territory of Moldova in case of "riots".

Since Moldova considers Transnistria to be its part, any resistance of Tiraspol to the will of Chisinau, and any attempt by the Russian peacekeepers deployed in the Transdniestrian Moldavian Republic to stop the bloodshed, can be declared a “riot”. That is, the gendarmes from Romania will be called upon to help Chisinau with a forceful “solution of the Transnistrian issue”, and also to suppress the actions of opponents of the takeover of Moldova by Bucharest in Moldova itself (Balti, Gagauzia).

An armed invasion of Moldova from the Prut can go through the line of the Ministry of Internal Affairs and the line of the Ministry of Defense of Romania. The document implies: consultations, exchange of representatives, holding joint military exercises, exchange of personnel. Joint military infrastructures can be created. It gives the go-ahead to "the organization of joint command at the operational and territorial levels and the corresponding work of the general staffs." It provides for the “exchange of personnel during exercises”, “the use of the airspace of countries during joint exercises”, the exchange of documents, including “cartographic support”, etc.

This means in the event of a conflict on the Dniester, Romania can connect its air force to attack Transdnistria and the Russian group in Transdniestria, as well as with the help of its General Staff, which, of course, is more powerful than the General Staff of Moldova, to plan combat operations. It is clear that the Romanian military will take over command.

Finally, Romania is a member of NATO, which creates the prerequisites for entering into a possible new war on the Dniester of the forces of the North Atlantic Alliance.

The Romanian leadership and its junior partners in Chisinau have chosen the present days for this step not by chance. The situation in the zone of the Moldova-Transdniestrian conflict is now rapidly exacerbated. It may be several months before the final gap between Chisinau and Tiraspol.

The media reported: preparations for the signing in Vilnius of the treaties on Moldova’s accession to the trade zone with the EU and the Moldova-EU Association have been completed. Transnistria does not intend to join there. Initialing should take place in November-2013 in Vilnius at the Eastern Partnership Summit.

At the same time, Chisinau, along the Moldova-Transdniestrian border, is deploying 6 migration posts, which will fulfill the de facto function of the border. One of their tasks is to fine Transnistrians traveling in the Republic of Moldova, who do not have Moldovan citizenship. At the same time, Chisinau admits that this idea was thrown to him by the EU.

For its part, Transdniestrian President Yevgeny Shevchuk promised to “stop” reconnaissance flights over the territory of the republic. It is also reported that additional Transnistrian forces were brought into Bender, which caused protests from Chisinau.

It is obvious that Romania is preparing a takeover of Moldova with a new force. 27 June, the ruling "Coalition of pro-European government" in Chisinau adopted the Border Regime Treaty between the two countries - while the Moldova State Border Treaty has not yet been concluded. As is known, Romanian President Traian Basescu has repeatedly stated that he never recognizes the border "established by Stalin and Hitler." He believes that the Treaty of Paris 1947 of the year, which established the border between the USSR (which included the MSSR) and Romania along the Prut River, was imposed on Bucharest as a result of the Second World War.

And now the Romanians are creating the basis for a future takeover: in parallel with the military and police penetration into Moldova, they shy away from consolidating the state border with Moldova along Prut. It turns out that they may enter into a possible conflict in the former Soviet Moldavia, but they do not recognize the border. Most likely, in the future, Bucharest sees this border as the Romanian-Ukrainian border in the area of ​​Kuchurgan, which is not far from Odessa. However, the plans of the builders of "Great Romania" also include the annexation of part of the Odessa region and Bukovina.

In the meantime, as Moldovan parliamentarians themselves admit of the ruling checkpoint, Romania "refuses to even discuss the treaty on the state border." This is logical, since Bucharest sees Moldova and Transdniestria in its composition.

So, the European Union and Romania are initiating the aggravation of the situation on the Dniester. The EU is pushing Moldova towards repressions against Transnistrians who do not have Moldovan citizenship. Romania creates the basis for military intervention in the Moldova-Transdniestrian confrontation.

From the point of view of Brussels and Bucharest, these steps are taken on time. If agreements are signed in Vilnius, then political negotiations between the Republic of Moldova and Transdniestria will lose their meaning. In fact, what to talk about, if legally Moldova moves into the political and economic sphere of influence of the EU and Romania, while the Transnistrian Moldavian Republic is heading for Eurasian integration? For Tiraspol, links with Moscow and, if possible, Kiev are extremely important. And if Tiraspol, contrary to the wishes of Brussels and Bucharest, does not want to go "to Europe through Romania", it means that they believe in these capitals, it should be pressed.

In Transnistria, they are very alarmed: if Russia does not intervene decisively now, the unrecognized republic is waiting for a fate worse than South Ossetia (there is no common border between the Russian Federation and Transdniestria), and the Russian peacekeepers face the fate of the KSOR base near Georgians. Moldavian reconnaissance aircraft are already flying over Transnistria - believed to be in Tiraspol, with NATO reconnaissance aircraft on board. In the capital, Transnistrian Moldavian Republic regard these actions as clarifying targets for strikes and promise to “nip” flights.

Transnistrians hope that Moscow will finally stop looking at Chisinau on every occasion and start working directly with Transnistria.
Here they are also counting on the strengthening of the Russian military presence in the Transdniestrian Moldavian Republic, as well as on the earliest start of large-scale funding for the modernization and rearmament of Transnistrian security forces.

Transnistria also urgently needs to develop and implement a training program for the army, the Ministry of Internal Affairs and the KGB of the republic in Russia. If Ukraine somehow participates in this, this is even better, since the penetration of Romania into Moldova directly threatens the national interests of Kiev, they are convinced in Tiraspol. However, the Ukrainian theme requires a weighted separate conversation.

In a word, Transdniestria expects Russia to repeatedly strengthen direct ties in all directions. If Chisinau openly goes under the NATO military umbrella, they note here that there is no point in general adhering to the formalities left over from the dead more than 20 years ago by the Helsinki Accords.

Ctrl Enter
Noticed oshЫbku Highlight text and press. Ctrl + Enter
We are
Good and angry policeman: how Kiev and Chisinau developed tactics to fight Transnistria and deception of MoscowThe role of the “anchor” holding Bessarabia from Romania moves from the PMR to the Gagauz and the Bulgarians: regional results-2013
Military Reviewin Yandex News
Military Reviewin Google News
239 comments
Information
Dear reader, to leave comments on the publication, you must to register.