On the ruins of the friendship of nations

July 3 2013
103
The fewer Russians in Dagestan, the more often shots in the mountains


I am a Russian Dagestan. Born in the Dagestan Autonomous Soviet Socialist Republic in 1937. Autonomous then she was under the Constitution of the USSR, and the Soviet and socialist - in essence. Traditional Islam, which was particularly developed in Dagestan during the time of Imam Shamil, peacefully coexisted with the Soviet government. The danger of radical Islamism appeared immediately after the collapse of the USSR in 1991.

The initiators of the collapse of the Union were unable to foresee that in this way they clear the way for a very dangerous foreign phenomenon, which soon began to penetrate not only into the Muslim regions of Russia, but also into its central cities, including Moscow and St. Petersburg. The resulting ideological vacuum and religious ignorance of the population became a breeding ground for the spread of a variety of pseudo-ideologies and pseudo-religions.

Through the destroyed borders of the state, there was a flood of emissaries and propagandists of radical interpretation of Islam, whose success was promoted by the collapse of the country's economy, the destruction of the previous ideology based on the tenets of the Bible and the Koran, the emergence of mass unemployment, a sharp decline in living standards, education, aggravation of interethnic relations, etc.

The ethnopolitical processes that arose in Dagestan in connection with this were reflected primarily in the well-being of the Russian population, whose outflow from the republic from 1991 increased sharply.

Of course, the most important factor in the outflow of Russians from Dagestan was the events of 90 in neighboring Chechnya and the weakness of local and federal authorities in protecting civilians from lawlessness and unrest. The most defenseless and vulnerable at that time were Russians, who did not have extensive clan and clan ties. The alienation of Russian housing by force then acquired a mass character. The support of friends and acquaintances was far from always having a decisive influence on their decision to leave Dagestan. Exacerbated religious extremism in the republic contributed to this process.

A certain anti-Russian role was played by the fact that despite the great importance of Russians in creating and strengthening the economy of Dagestan, in the development of culture, science and education, they were essentially not allowed to distribute the achievements and results obtained both in 90 and in subsequent years.

During this period, significant changes began to occur in the personnel policy of the leadership of Dagestan. The representation of Russians in the government and other administrative bodies of the republic decreased with a faster outflow of Russians, thus provoking its continuation.

But this was not always the case.

Russians appeared in the Caspian region shortly after Peter the Great met Shamkhal Tarkovsky Adil-Giray in 1722. In 1860, under Alexander II, the Dagestan Region was formed as part of Russia. The Russians, along with the Kumyks, the Mountain Jews, the Armenians, and the Azerbaijanis, were the core around which the urban population of the region began to form. On the basis of Russian fortresses in the territory of the Dagestan region Petrovsk-Port was founded in 1857, and in Temir-Khan-Shura in 1866. 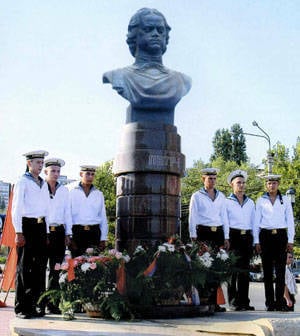 The city of Derbent was conquered by Russian soldiers in the war with Persia at the beginning of the nineteenth century and, according to the Gulistan Treaty of 1813, was ceded to Russia. October 12 2013 will turn exactly 200 years from the moment Derbent became a Russian city. His administration is simply obliged to mark it and to erect a monument to the Russian soldier in the city, just as the administration of Makhachkala established monuments to the Russian teacher and Peter the Great.

Neither does the administration of Buinaksk, Gunib, Khunzakh, Botlikh, Cheryurt, Khasavyurt, Sergokal and Akhty honor the fortresses and burial places of Russian soldiers, officers and members of their families who lived and served there in the late 19th - early 20th century.

The rapid growth of the number of Russians in Dagestan in the first half of the last century was formed as a result of their active participation in the construction of cities, factories, factories, railways and highways, a seaport, railway stations, power stations, etc. Russian teachers, doctors, engineers, cultural workers contributed to the development Education, science and culture in the republic. At this time, in multinational Dagestan, the Russian language is becoming the language of interethnic communication.

On the eve and during the Great Patriotic War, the Russians formed the basis of the administrative apparatus of the republic. Today, among the deputies of the State Duma and members of the Federation Council of the Russian Federation from Dagestan, there is not a single Russian last name on the lists of United Russia and Fair Russia.

In 2005, the book “Peoples of Dagestan during the Great Patriotic War 1941 – 1945” was published in Makhachkala. (Documents and Materials) ”, which published information about volunteers from Dagestan. The Russians in those years lived and were called up for war not only from cities, but from Akushinsky, Akhty, Gunibsky, Rutulsksto and other mountainous regions of DASSR. The authors did not want to reveal the national composition of volunteers from the city of Makhachkala, probably because they were based on the Russians. But it was natural, because until 1922, this city with the majority of the Russian-speaking population was called Petrovsk-Port, and the Highlanders then lived in the mountains and were called from there.

The indifference of the federal center to the problems of Dagestan and, in particular, its Russian population has played a very negative role in the last twenty years. This took advantage of ethnic clans, corrupt officials, extremists, terrorists and radical Islamists.

Somewhat encouraging is the understanding of this problem by Russian President Vladimir Putin, who acknowledged that the exodus of Russians from the North Caucasus means the loss of skilled labor, as well as entire industries and the very culture of production. And more - it is a violation of the culture of living together of the peoples in these territories. He expressed the intention of the federal center to ensure the return of people regardless of their nationality.

The solution of this task is extremely difficult, since many necessary conditions are absent for the return of Russian Dagestanis to their former residence. In my opinion, the first step in this direction should be the renaming of the Tarumovsky and Kizlyarsky districts into the Tarumovsky Cossack district and the Kizlyar Cossack district. This will strengthen the conviction in the minds of Russian Dagestanis that they are not strangers in the Republic of Dagestan.

The new leadership of the republic shows some concern about the fact of the outflow of Russians from Dagestan. But, unfortunately, there are no practical actions to solve this problem. Moreover, many have already noticed: the smaller the Russian population becomes in Dagestan, the more often shots are heard not only in the mountains, but also in the cities of the republic.

It will be much more difficult to solve the challenges facing Dagestan to radically change the economic and criminal situations without the Russian population.