Chief of staff of the highest class 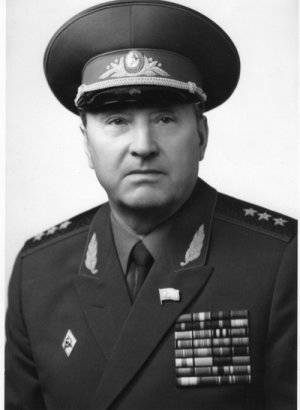 30 June marks the 90 anniversary of the birth of the well-known commander, Colonel-General Dmitry Aleksandrovich Grinkevich (1923 — 2009).


The son of a rural teacher from the village of Kuravo in the Pogarsky District of the Oryol (now Bryansk) Region, Dmitry Grinkevich barely managed to finish high school and go to university when the Great Patriotic War began. Like any young man of that time, he considered it his duty to stand up for the Fatherland and, without waiting for the summons from the military registration and enlistment office, volunteered for the front. Participated in hostilities at the Bryansk, 1, and 2 of the Belorussian fronts. Having started a war as a soldier, having drunk a bitter cup of defeats and retreats in the initial period and having experienced the joy of victories in the final stage, he met 9 May 1945 with the captain, deputy battalion commander.

After the war, Dmitry Aleksandrovich Grinkevich consistently held the posts of battalion commander, chief of staff, regiment commander and commander of a motorized rifle division. Rapid career advancement is achieved through rare diligence, constant work on oneself, and improved military knowledge. In 1945, he graduated from the Higher Officer Courses "Shot", the following year - Higher Officer Armored School, in 1956 - Military Academy named after M.V. Frunze, and in 1965, the Military Academy of the General Staff.

Since 1965, he has consistently served in the operational headquarters as the chief of the operational section of the army headquarters, chief of the army headquarters, chief of the military district and chief of staff of the Group of Soviet Forces in Germany. In all these important posts, he shows professionalism and great organizational skills. Especially these qualities manifested themselves in the GSVG, where he had to solve complex strategic tasks performed by a large group of various types of troops and special forces, as well as interact with units and formations of the National People’s Army of the GDR. Dmitry Aleksandrovich paid a lot of attention to the arrangement of personnel and providing him with the necessary living conditions, he was caring and attentive to people. And subordinates answered the same.

As a professional and honored commander in 1981, he is appointed Chief of the Ground Forces General Staff. This post made completely different demands in solving a much larger range of tasks on the scale of all the Ground Forces in close cooperation with other branches of the Armed Forces. Much attention was paid to the construction and development of the Ground Forces as the main and most numerous service of the Armed Forces, mobilization work, preparation of strategic reserves, improvement and development of weapons systems. Much was done to equip the Main Committee and improve the life of the officer corps, especially with regard to the provision of housing. Many officers and generals for this recall him with a kind word.

This is how his immediate superior General of the Army Valentin Varennikov, then commander-in-chief of the Ground Forces, spoke about Colonel-General D. Grinkevich: “He did a lot to improve the work of the General Staff and constantly helped the headquarters of military districts. For the Commander-in-Chief, the Main Headquarters was, of course, the main pillar in the resolution of all our problems, our relations were good and open. He, like the other deputy commanders, came to me at any time without knocking. YES. Grinkevich was the chief of staff of the highest class and took upon himself many major questions. ”

In addition to military service, Dmitry Aleksandrovich Grinkevich paid great attention to social work. Three times he was elected deputy of the Supreme Soviet of the RSFSR, was a delegate of a number of party congresses. Using his position, he did a lot for ordinary people. We must not forget about the great assistance that he provided to his fellow countrymen in the Bryansk region. His soulful generosity, the ability to perceive the pain of others as his own will remain forever in the memory of all who knew him and with whom he had to communicate.

MORE THAN fifty years old Dmitriy Aleksandrovich gave service in the Armed Forces. His homeland labor praised highly. He was awarded the Orders of Lenin, the October Revolution, the Red Banner, the Red Banner of Labor, three orders of the Patriotic War, three - the Red Star, the Order "For Service to the Homeland in the Armed Forces of the USSR" III degree, many medals, including a number of foreign states.

After his retirement in 1991, Dmitry Alexandrovich worked for more than 10 for years in the General Staff as a consultant. For almost four years now, he has passed away, but he still remains in our memory, and his good deeds will never be forgotten. Grateful countrymen commemorated him. In Pogar secondary school, where he studied, a memorial plaque was installed and a museum was created. On the day of Dmitry Aleksandrovich's 90 anniversary, the veterans of the Main Command of the Ground Forces, members of the Bryansk association, and his fellow countrymen bow their heads before the memory of a worthy son of the Fatherland.

Veterans of the Main Command of the Ground Forces, members of the Bryansk community.