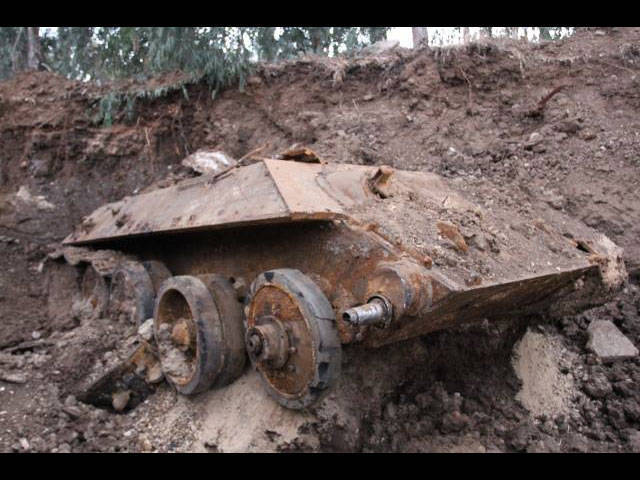 The workers who were digging the foundation pit for the house on Merkava Street in the Holon industrial zone were greatly surprised to find a large metal object under the layer of soil.


Sappers and police officers were called to the place where this item was found.

Tankswhich gained fame during the Second World War, were actively supplied by the Soviet Union to Arab countries and took part in the wars of 1956, 1967 and 1973.

In particular, more than 400 “Thirty-Fours” of various modifications were on the eve of the Doomsday War in service with the Egyptian army and around 200 tanks in service with the Syrian army. 12-th tanks were also owned by the Lebanese al-Marabitun grouping funded by Egypt.

Around 300 T-34 were captured by the IDF (most of them during the Six Day War), and even took part in Israeli military parades as trophies. Some tanks were transferred to museums (including the Museum of Tank Forces in Latrun) or sold abroad, but most were used as targets at landfills.

How exactly the Thirty-Four came into Holon is currently unknown.

Ctrl Enter
Noticed oshЫbku Highlight text and press. Ctrl + Enter
We are
Russian sappers on mine de-PalmyraInstalled the crew of the deceased attack aircraft found during the construction work of the bridge across the Kerch Strait
Military Reviewin Yandex News
Military Reviewin Google News
75 comments
Information
Dear reader, to leave comments on the publication, you must sign in.