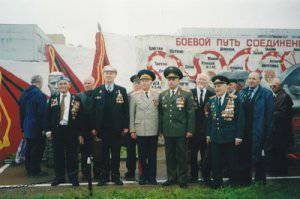 To the 70th anniversary of the 4th Guards tank armies

Lieutenant-General V. Badanov was appointed commander of the 4 Tank Army, the formation of which was completed in July. The union included 11 tank corps (commander lieutenant general of tank forces N. Radkevich), 30 th Ural volunteer tank corps created at the initiative of workers of the Urals (commander lieutenant general of tank troops G. Rodin), 6 guards th The Red Banner Mechanized Corps, formed on the basis of the 3 Guards Red Banner Motorized Rifle Division, which participated in the defeat of the Japanese troops at Khalkhin Gol in 1939 (commander Major General A. Akimov), as well as formations and units of the army subordinate .

From July 26, the 4-I tank army participated in the Oryol operation as part of the Western and then the Bryansk Front. 5 February 1944, the army became part of the 1-th Ukrainian Front and in its composition led the fighting until the end of the war. Tankers took part in the Proskurov-Chernivtsi operation, during which 10 March 1944, in connection with the illness of General V. Badanov, took command of the 4 Tank Army Lieutenant-General D. Lelyushenko. With him the army conducted the Lvov-Sandomierz, Vislo-Oder, Lower Silesia, Upper Silesia, Berlin and Prague offensive operations.

March 17, 1945 by order of the People's Commissar of Defense of the USSR for courage in the battles for the Fatherland, stamina, courage, courage, discipline, organization and skillful performance of combat missions, the 4th Panzer Army was transformed into the 4th Guards Tank Army with the presentation of the Guards Combat The banner. On March 25, it included the 5th Guards Mechanized Corps (commander Major General Panzer B. Skvortsov). The presence of three corps in the army greatly enhanced its combat capabilities. In subsequent operations, the 4th Guards Tank Army mastered new methods and forms of warfare and the organization of interaction with combined arms armies and aviation. 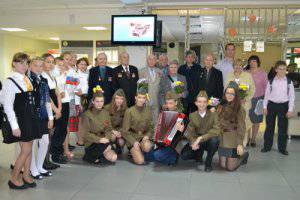 GENUINE the battle for Berlin became the triumphant triumph for the 4 Guards Tank Army. Before the operation, a number of formations and units of the association received the title of the Guard, which raised the morale of the tankers. April 16 army units launched an offensive and April 21 advanced to the south-western outskirts of Berlin. 63-I Guards Tank Brigade under the command of Colonel M. Fomichev, acting as a vanguard, defeated the German garrison in the southern suburb of Berlin - Babelsberg and freed thousands of prisoners from concentration camps 7. Among them was the French Prime Minister Edouard Herriot and his wife. 22 April The 5 Guards Mechanized Corps captured the cities of Belitz, Treyenbritzen and Uterbog, where the airfield was captured and around the enemy's 300 aircraft. Having reached the line of Treuenbritzen - Belitz, the corps began a battle with the advanced units of General German Wönk's 12, which was trying to break through to Berlin. All enemy attacks were repelled, and parts of it were thrown back to their original position.

Entering the German capital from the south, the 4-I Guards Tank Army promptly made contact with the troops of the 1-Byelorussian Front, closing the encirclement around Berlin from the west. On the night of April 25, the 35-I Guards Mechanized Brigade of the 6 Guards Mechanized Corps captured the city of Kötzin in 22 km west of Berlin, where it linked up with parts of the 1-Belarus Front, closing the encirclement.

In the morning of May 2, German troops burst from encirclement and went into the location of the army headquarters. The reflection of the attack was headed personally by the commander D.Lelyushenko, and by noon the enemy was defeated.

During the Berlin operation, 4 troops of the Guards Tank Army destroyed 42.850 enemy soldiers and officers, 31.350 captured, burned and captured 556 tanks and armored personnel carriers, 1.178 guns and mortars.
Meanwhile, the rebellious Prague gasped and called for help.

PRAGUE the operation was the last offensive operation of the Soviet troops in Europe. The 4-I Guards Tank Army was ordered to advance along the western shores of the Elbe and the Vltava in the general direction of Prague. 6 May Army, rushing to the rescue of the rebels, went on the offensive a day earlier than planned.

On the night of May 8, the 10-I Guards Mechanized Brigade, acting as a vanguard of the army, near the city of Zatec, defeated the headquarters of Army Group Center, thereby completely paralyzing the control of German troops. Acting in difficult mountain conditions, the guardsmen of the 16 th mechanized brigade of G. Shcherbak in the morning of 8 in May occupied the city of Most, which has great military and industrial importance. On the night of May 9, the 63-I Guards Tank Brigade broke into Prague. In the morning, the 5, 6, and 10 Guards Tank Corps completely entered the Czech capital.

But on this war for the 4-th Guards Tank Army is not over. By order of the front command, after the liberation of Prague, the formations and units of the army cut the withdrawal routes of the defeated German troops to the west.

During the Prague operation with 6 of 10 May 1945 years 4-Guards Tank Army, having fought about 200 km, destroyed or captured about 200 tanks and armored personnel carriers, 246 guns and mortars, 6.290 vehicles, captured 48 thousand German soldiers and officers, including 9 generals.

15 April 1957 of the year The 4-th Guards Tank Army is transformed into the 20-th Guards Army. 17 January 1974 of the Year By decree of the Presidium of the Supreme Soviet of the USSR for merits in battles against the Nazi invaders and success in combat training 20-I Guards Army (assignee 4-th Guards.) Is awarded the Order of the Red Banner.

CURRENT A generation of guardsmen worthily continue the glorious martial traditions of unification.

August 1999 - December 2001. A number of military units of the 20 Guards Army are taking part in the counter-terrorist operation in the North Caucasus. For courage and heroism, the rank of Hero of the Russian Federation was awarded to lieutenant colonels V. Alimov and V. Chabanov, majors A. Ivanov and A. Sovgirenko (posthumously). The former chief of staff of the 20 Guards Army, General V. Shamanov, showed himself brilliantly in the post of commander of the Western grouping, his organizational talent and courage marked by the title of Hero of the Russian Federation. More than a thousand officers, warrant officers, sergeants and army soldiers for their courage and combat skills displayed during the counter-terrorist operation in the North Caucasus received state awards.

In November 2001, when summing up the results of combat training of the Armed Forces, the association was named the best in the Ground Forces. Following 2009 – 2012, the 20 Guards Army, whose management of 1 in December 2010 of the year was redeployed to the village of Mulino, Nizhny Novgorod region, remained the first, as evidenced by the joint operational exercises “West-2009” and “Union Shield - 2011”. Currently, the union of 9 compounds and military units, 4 of which the Guards.

IF talk about the continuation of traditions, it is impossible not to say about the museum 4-th Guards Tank Army, located in secondary school number 627 - the one where 70 began the formation of the army years ago. The museum owes its birth and development to the energy of Chairman of the Council of Veterans of the 4 Guards Tank Army Major General (Ret.) V. Parkhomenko and the contribution of the historian V. Dementiev, the oldest army veteran, who filled the exhibition with scientific content. To this day, veterans, teachers and students of the school are actively involved in the improvement of the museum and the replenishment of the museum exposition.

Last year, on the eve of the anniversary, it was decided to expand the museum complex by using the “inactive” walls of the corridor. They managed to display the entire period of the Great Patriotic War. In 2009, the museum became the winner of the city museum competition, in 2012, it won a prize. This is a common victory of veterans, teachers, schoolchildren, their parents and a tribute to those who conquered the world and defended life on Earth - to the soldiers of the 4 Guards Tank Army.

Ctrl Enter
Noticed a mistake Highlight text and press. Ctrl + Enter
We are
How the Urals created a tank corps that beat the Nazis from Kursk to PragueMyths of the Great Patriotic. Papier mache helmet
4 comments
Information
Dear reader, to leave comments on the publication, you must to register.