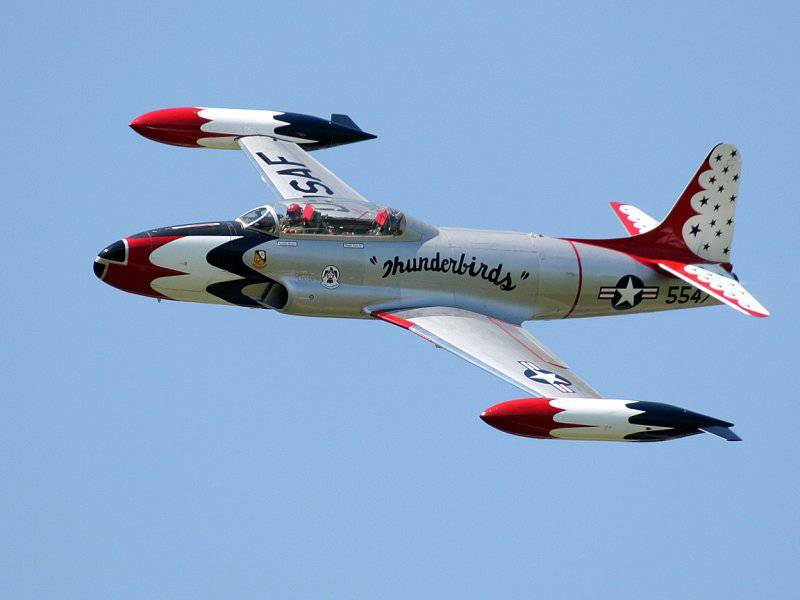 The twin training aircraft T-33A, produced by LOKHID, is one of those long-livers on whom the career of several generations of pilots began.

It was created on the basis of the first-generation jet fighter F-80 "Shooting Star", but managed to outlive its progenitor.

Then the meeting of the main designer of the Lockheed company Daniel Russ with representatives of the command of the US Air Force at the Wright Field airbase took place. Following the meeting, an official letter was written in which the company was entrusted with the development of a jet fighter using the English H.1B Goblin engine of the De Havilland company.

The first flight of the XP-80 prototype went through 8 on January 1944 of the year, and the second prototype was released on 10 on June 1944 of the year. After successfully completing the tests, the company began preparations for mass production. True, there was one problem with the engine - Allis Chalmers could not stand the delivery time, putting the program in jeopardy. Guide Lockheed decides to install General Electric I-40 powerplants on production aircraft. Later, Allison will be engaged in the mass production of these engines, they will receive the designation J-33.

To install the new engine, it was necessary to increase the length of the fuselage by 510 mm, change the shape of the air intakes, and put a boundary layer cutter in front of them. In addition, the wing area was increased.

The air force was pushing the launch of the aircraft into mass production, since they needed a worthy opponent for the German Me-262. Four pre-production aircraft YP-80 went to combat trials on the territory of Europe: two went to the UK, and two more - to Italy. True, none of these fighters never met the enemy.

In March, 1945, the first production models began to enter the army units. It is worth noting that the development of new aircraft was accompanied by a very high level of accidents.

At the beginning of his career, the Shooting Star fighter could hardly be called a safe and reliable aircraft, although these qualities were inherent in other equipment of the company. And the main problem was not design errors, but the novelty of the class of reactive technology itself.

6 August 1945 killed the famous US Air Force pilot Richard Bong, who was the most efficient pilot in stories USA. On his account 40 Japanese aircraft shot down on a P-38 "Lightning" aircraft. The latest for him was another flyby of the serial sample F-80А.

In 1947, the nomenclature of the United States Air Force changed, so from that moment the aircraft received the name F-80 Shooting Star. Production of the latest serial modification of the F-80C began in February 1948 year. It was equipped with an even more powerful J33-A-23 engine with a thrust which reached 2080 kgf. The combat qualities of the vehicle were also significantly raised. In particular, two bomb pylons appeared under the wings, into which you can also install unguided rockets. As part of the built-in weapons F-80 was present six 12.7-mm machine guns M-3, which ensured the rate of fire in 1200 rounds per minute with ammunition in 297 cartridges for one barrel.

In the summer of 1950, the mass production of these aircraft was completed. Total 798 units were released. 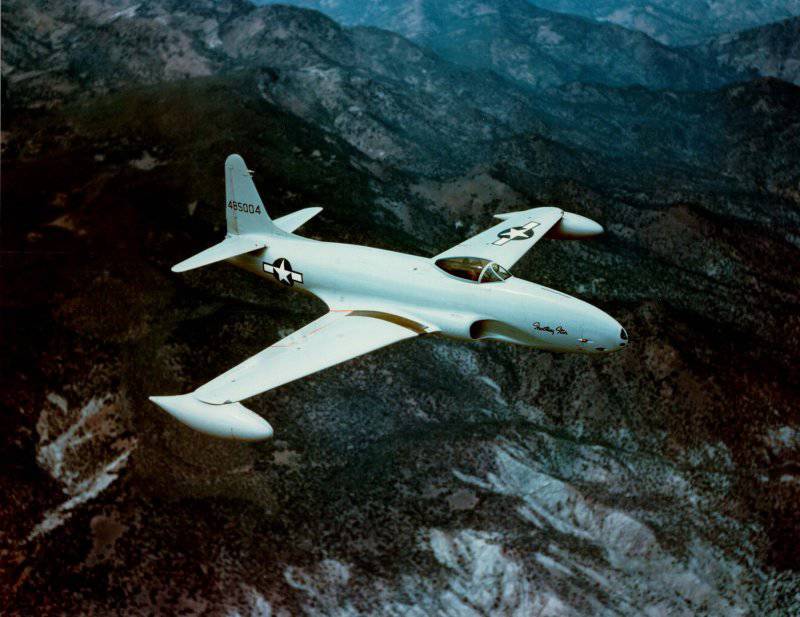 It is worth noting that the combat career of the F-80 did not become too successful. During the clashes in Korea, it turned out that they were not competitors for the Soviet MiG-15. For the destruction of the MiGs, the more suitable F-86 "Saber" was used, and all the available F-80Cs were reclassified into fighter-bombers. 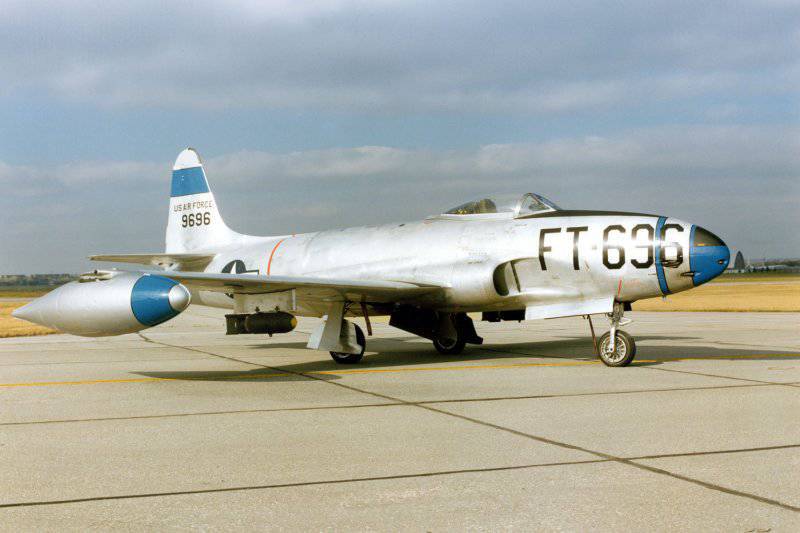 The creation of the training T-33A began when it became obvious that, in view of the high accident rate of the new jet machines, a two-seat model would be required. This development company Lockheed conducted in an active manner.

In August, almost ready-made Р-80С was removed from the assembly line, which they were going to convert into a double one. The secrecy of the development has done its job; Lockheed was the first to offer such a machine, although the growth of the training aircraft market was predictable.

In the process of reworking it was necessary to disassemble the serial version of the P-80C in order to “embed” a second raised cabin, allowing for dual control. In the fuselage there was an insert in 75 cm in front of the wing, and also another in 30 cm behind it. Also had to halve the volume of the fuel tank in the fuselage, but the total capacity remained unchanged, thanks to the replacement of the wing-protected tanks to soft nylon. The wing tips made it possible to place 230-gallon tanks under them, which were attached along the line of symmetry.

The ejection seats for the new car, which received the designation TR-80C, remained virtually unchanged. At the same time, the cabin received a single flashlight, which now did not lean back to the side, but rose upwards by an electric motor.

The aircraft received weapons as part of two 12.7-mm machine guns with ammunition in 300 ammunition each.

The first test flight took place on March 22 1948. In the air, the plane was not much different from the single-seat version. Moreover, the elongated shape of the fuselage slightly increased flight characteristics.

For military trials, X-NUMX units of TP-20C were released. A series of familiarization flights was organized at various Air Force bases for pilots and technicians. 80 June 11, the machine received the designation TF-1948C, and 80 May 5, the usual T-1949A. 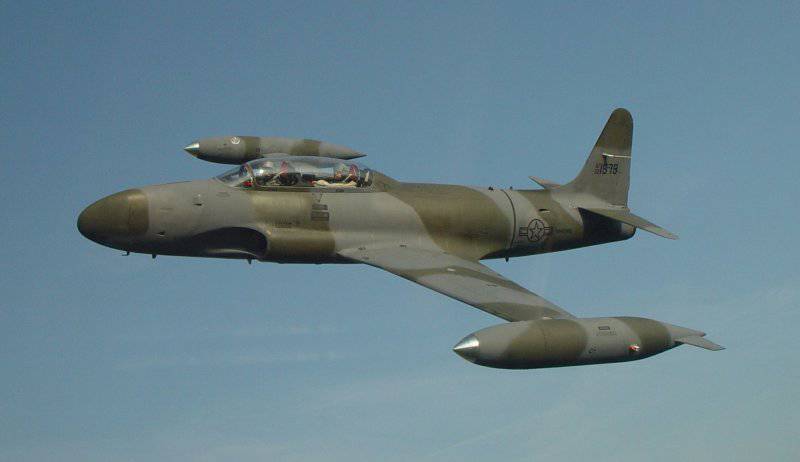 In addition to the Air Force, command showed interest in the new training machine. fleet, since there was also an acute problem of accidents during the development of samples of jet equipment. In just a year, 26 T-33A training aircraft were transferred to the fleet. And next year, naval pilots received another 699 aircraft.

In total, for the entire production time, 5691 T-33A was released in various versions. Another 656 machine released Canadian company "Canadeyr", and the Japanese "Kawasaki" increased the number of 210. Most of the American-made aircraft went abroad, hitting more than twenty countries in the world.

For half a century, the T-33A has been a “classroom” for thousands of pilots.

Also, T-33А was actively used as a combat during many regional conflicts, where he was lucky much more than the progenitor - F-80 "Shooting Star".

Pilots of the T-33A shot down several B-26 "Invader" invasion troops during air battles over the Cuban Gulf of Pigs.

But the main purpose of the T-33A were "counterguerrilla" strikes against ground targets.

Several modifications were developed specifically for foreign orders: the reconnaissance RT-33А, equipped with cameras in front of the fuselage and enlarged tanks, as well as the AT-33А attack aircraft, on which more advanced navigation and sighting equipment was installed, as well as reinforced holders for combat load.

At the moment, only in the Bolivian Air Force are AT-33A manufactured in Canada, which are used for raids on drug traffickers and left-wing rebel groups. 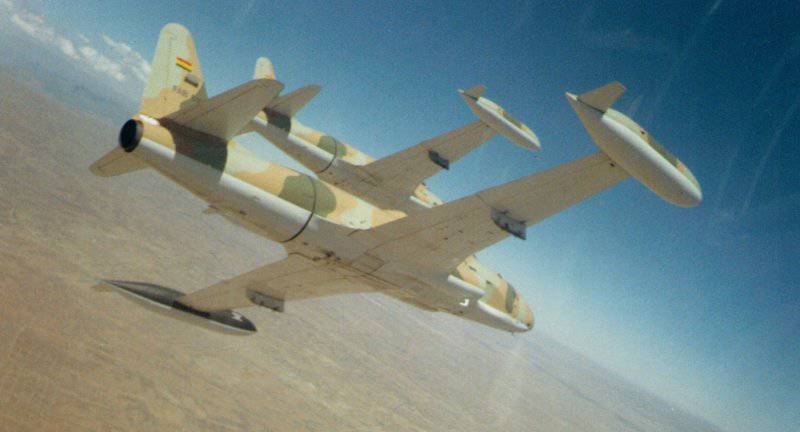 Most of the departures take place in the Villa Tunari district - this is the unofficial capital of coca production in Bolivia.

It is worth noting that this is a very durable aircraft. For example, his peer and analogue developed in the USSR - the MiG-XNUMHUTI training aircraft - was actively used until the beginning of the 15-s. And T-80A was listed in the US Air Force up to the 33 year.

T-33A, which were removed from service, turned into remote-controlled targets with the designation QT-33A. First of all, they were used to simulate the flight of maneuverable and low-flying air targets, as well as cruise missiles.