Operation "Cottage" - the most curious American failure in history

July 2 2013
81
Operation Cottage is the code name for a US Army operation aimed at liberating Kyska Island from the Japanese during the Pacific Campaign during World War II. The operation ran from 15 to 24 in August 1943 of the year. Capturing Kyska Island is a truly unique experience. stories wars when the Japanese army suffered no casualties, and the Americans lost more than 300 people killed and wounded. One destroyer was also damaged, having blown up on a mine. In fact, this operation entirely consisted of "friendly fire", and the American army valiantly liberated the island, which was not a single Japanese.


Kyska Island is one of the small islands belonging to the Aleutian Ridge. The island is about 35 kilometers in length, and its width in different parts varies from 2,5 to 10 kilometers. The area of ​​the island is 277,7 km2. The highest point of the island is Kyska volcano, the last eruption of which took place in 1964 year. There is no resident population on this island. The island was discovered in the XVIII century - October 25 1741 of the year. In the 1867 year after the sale of Alaska to the United States, Kyska Island came under their jurisdiction.

During World War II, the island was captured by the Japanese, this happened in the summer of 1942, when Japanese marines landed on the island and destroyed the US Navy meteorological station located here. Later on, an impressive garrison of Japanese troops was stationed on the island, which, according to the information of American intelligence services, numbered up to 10 thousand people. However, the seizure of these islands did not bring Japan special dividends. 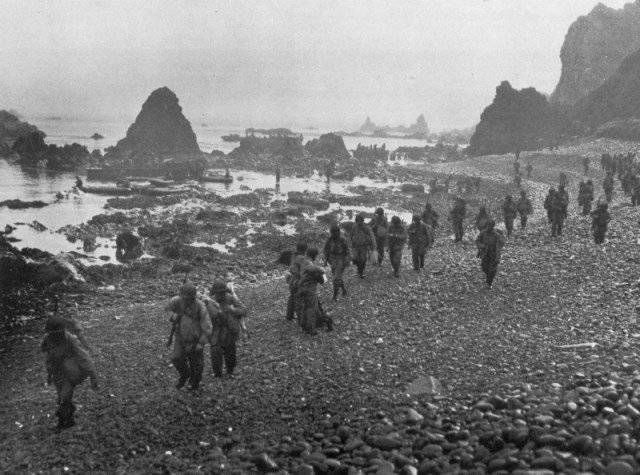 At the first landings on the islands of Atta and Kyska, the Japanese brought ashore military units and special working detachments of up to 1200 men on each of the islands. Later, additional units and personnel for the communications and air defense services, as well as for the submarine base were transferred here, the total number of the garrison on Attu Island was brought to 2500 people, and on Kyska Island - 5400 people.

For almost a whole year after the Japanese captured these two Aleutian islands, the actions of the allies in this region were limited only by insignificant disturbing raids aviation and patrolling submarines, which aimed to isolate the enemy-occupied islands. In August 1942, a detachment of American cruisers and destroyers attacked the occupied island of Kyska from the sea. Within a few months thereafter, harassing air raids on the captured islands were carried out by US and Canadian army aircraft.

In the winter of 1942-1943, American troops occupied the islands of Adak and Amchitka, on which airfields were built in a short time for fighter jets, which began to provide cover for the bombers in their ever-increasing raids on the islands. Soon, thanks to the activity of Allied aviation, the island of Kyska was almost completely cut off from the islands directly by Japan. By isolating the enemy troops, the Allied forces in the northern part of the Pacific Ocean practically solved their main task. Several thousand Japanese soldiers experiencing supply problems (food and ammunition were delivered only by submarines), in the snow of the Aleutian Islands could hardly have any significant influence on the course of the entire war. But public opinion in the United States did not want to put up with the fact that part of America was occupied by Japanese troops, although this part was not of great value. 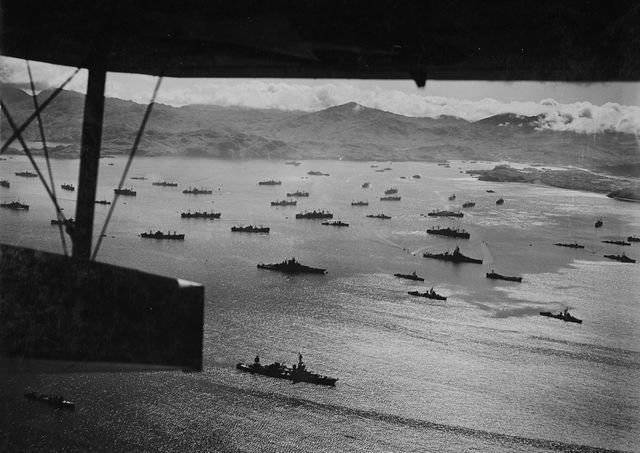 In addition, the committee of chiefs of staff planned to clear the Aleutian Islands from the Japanese in order to organize the supply of combat aircraft to Siberia if the USSR ever came out against Japan. In January, 1943, commanded by US forces in the Aleutian Islands, was assumed by Rear Admiral Kincaid. Returning the islands seized by the Japanese, he considered his main task and advocated an early attack on the island of Kyska. However, realizing that within a few months he would not be able to accumulate a sufficient number of troops and funds for this operation, he decided to concentrate on taking the island of Attu.

But the easy walk did not work, the operation to seize Attu Island began on May 11, while the fighting on the island continued for 3 weeks and ended only on 30 May 1943 of the year. The battle for the island turned out to be quite bloody, the American troops lost 579 people killed and 1148 more wounded, and almost 2100 people fell to non-combat losses, mainly due to frostbite. Japanese losses amounted to about 2900 people, only 28 soldiers were taken prisoner, among whom there were not a single officer.

After the seizure of the island of Attu, the capture of Kyski was to put an end to the entire Aleutian campaign and the American military, taking into account the bloody battle for Atta, planned to attract much more forces and assets. In the Addak Island area, a grouping of troops from more than 100 ships was concentrated, and the landing force had to make up 29 000 American soldiers and 5500 Canadian. In this case, the troops received advanced arctic equipment. In addition, since the end of July 1943, the island of Kyska was subjected to constant airstrikes and shelling of ship artillery. 13 August 1943, a training landing on Adak Island was carried out, and the operation to liberate Kyski was to begin on August 15. 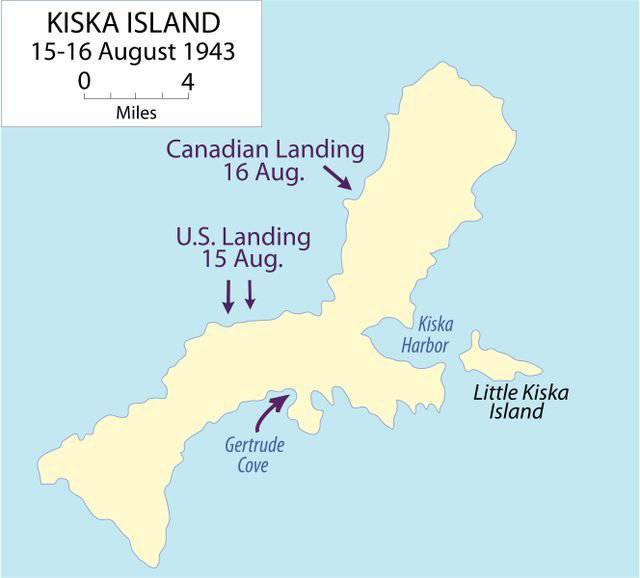 As a result, in the early morning of August 15, the first small group of American infantry landed on the west coast of the island, and Canadian units landed 16 in August just to the north. Nobody interfered with the landing on the island, but this did not surprise the veterans of the Battle of Attu. The Americans hoped that, only having advanced deep into the island, they would face organized resistance from the Japanese forces, which were entrenched at the commanding heights.

However, the enemy did not show himself. Finally, at the end of the second day of the operation, when American intelligence reached Gertrude Bay - the location of the main Japanese facilities - it became obvious that there were no Japanese troops on the island. The trap was ready and slammed, but the enemy fled. No battles for the island followed, one of the greatest surprises in the history of wars occurred, and the only combat casualties of the paratroopers were associated with "friendly fire". 24 August 1943, the commander of the land landing forces, General Charles Korlett, stated that Kyska Island was back under US control.

As we found out later, the Japanese command, realizing the impossibility of defending an island that was almost isolated from the outside world, decided to evacuate its garrison. On July 29, the Japanese unit as part of the 2's cruisers and 10 destroyers under the cover of dense fog successfully made a swift march into the harbor of Kyska Island. Clinging to the northern shores of the island, the connection at high speed made the transition and in 14: 45 anchored. Within 45 minutes, the Japanese ships took on board the entire garrison of the island - more than 5100 people and left Kysk in the same way as they arrived on the island. The island’s garrison was evacuated to Paramushir. On the way back, the Japanese cruiser Abukuma was spotted off the northwestern coast of the island by an American submarine. This was the only contact between the troops of the two sides. At the same time, patrols of American submarines at this time went to the bases to replenish fuel supplies, and it was impossible to carry out air searches due to thick fog. 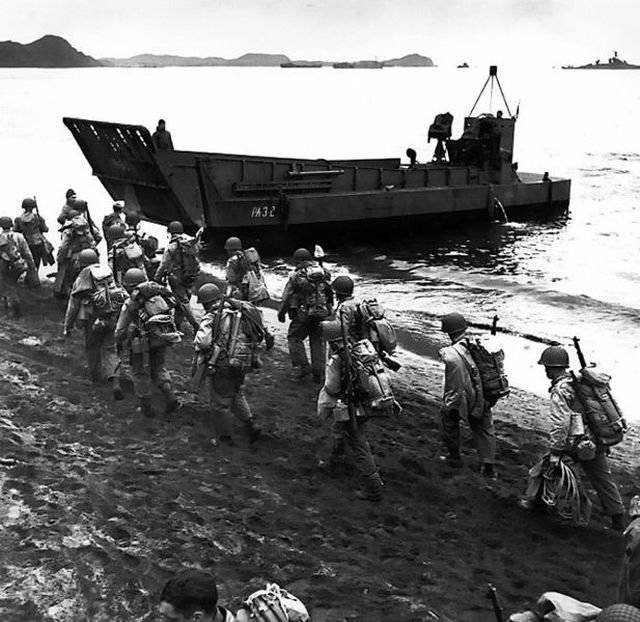 This is hard to believe, but the capture of the island left by the Japanese soldiers turned out to be quite impressive losses for the allies. During the survey of the island (a large number of underground tunnels were found on it), American and Canadian soldiers lost 31 people killed and about 50 wounded, mainly due to "friendly fire". In addition, 130 soldiers earned frostbite, and when approaching the island, the destroyer Abner Reed was blown up on a Japanese mine, 71 people died on board the destroyer, and 47 sailors were injured. In terms of the loss ratio, the "defense" of Kyski Island was the best operation of the Japanese armed forces in the Pacific theater of military operations.