July 2 2013
122
During the recent Le Bourget 2013 international air show, several Newsconcerning the future of domestic aviation industry. According to one of the statements of Russian officials, in the near future the Ministry of Defense will sign a contract for the supply of new MiG-35 aircraft. 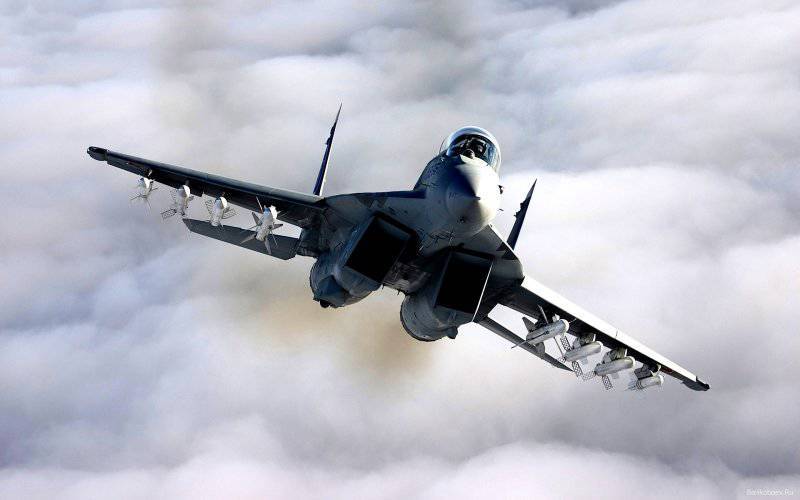 The plans for the production and purchase of new generation fighter 4 ++ MiG-35 became known from an interview with the general director of the Russian MiG aircraft manufacturing corporation S. Korotkov. As reported by Jane's, referring to the head of the organization, negotiations between the Ministry of Defense and the corporation are underway recently, and a contract will be concluded very soon. According to the general director of the company "MiG", an agreement on the supply of aircraft could be signed before the end of June. At the same time, Korotkov noted that the signing of the document could take place next month. As it became clear a few days after the interview, the Ministry of Defense and RAC “MiG” did not have time to conclude a contract before the end of June and therefore this agreement is likely to appear during the month of July that began.

It is worth noting that such a shift in the timing of the signing of the contract does not look like something strange or even dangerous for the Russian air force. The fact is that a few weeks waiting for the official registration of the order literally fades against the background of the entire previous stories MiG-35 project. The first reports of the plans of the Ministry of Defense regarding the purchase of these fighters appeared in 2009 year. However, over the past four years, the opinion of the military department has managed to change and so far there have not been any such aircraft in the Air Force. Shortly before the appearance of those messages, Sukhoi received an order for the construction of 48 Su-35C fighters, because of which the potential supply of Mikoyan machines was considered as a measure designed to complement Su fighters and expand the capabilities of the Air Force. But such an addition still remained at the level of various reflections.

The volume of probable purchases in 2009 was estimated at 20-30 aircraft, and unnamed sources in the Ministry of Defense shared with the press information about plans to equip two squadrons for 2015 year. The latest reports on the future purchase of MiG-35 fighters were received in the autumn of the same 2009 year, after which the topic disappeared from view for a long time. Nevertheless, the testing and refinement of the promising fighter continued, and last year information about the future order reappeared. In October, 2012, the general director of RSK MiG, S. Korotkov, announced that the first MiG-35 will be transferred to the customer already in 2014. A few months after that, in April of the current 2013, Russian President V. Putin also spoke about the planned start of purchasing a new fighter.

Finally, at the end of June, S. Korotkov made another statement about future deliveries of the MiG-35. Thus, the epic that lasted for several years with the determination of the need for the purchase of such fighters was coming to an end and the corresponding contract would be signed soon. The exact number of aircraft required has not yet been announced. Previously called various numbers up to 70-80 fighters. Now the volume of purchases is estimated much more modest: according to Korotkov, more than two dozen planes will be the subject of a contract. This number of fighters is enough to equip several squadrons. At the same time, the needs of the Russian Air Force in the MiG-35, according to different sources, are estimated at least in 35-40 machines. Perhaps in the future there will be another contract, in accordance with which RAC "MiG" will supply an additional batch of fighters. Such a development in the light of the existing construction of the Su-35C aircraft looks real and likely. Recall, at present, the company "Sukhoi" fulfills an order for the supply of 48 multi-role fighters, and in the future it is planned to sign a new contract involving the construction of a new series of the same aircraft.

Until now, the question of why the MiG-35, despite all the statements, for several years could not be the subject of a supply contract, remains open. Some time ago it was often said that this plane had insufficient technical and combat characteristics. The reason for the appearance of such fabrications was the failure of the MiG-35 in the Indian tender MMRCA. In the summer of 2011, after several months comparing the submitted documents and airplanes, the Indian competition commission announced its preliminary decision: the Russian fighter does not meet the requirements and therefore does not qualify for the final part of the competition. This decision of Indian officials was the reason for the charges in the direction of the new aircraft.

Almost two years have passed since then, during which the development of the fighter and its individual systems continued. Judging by the latest statements and ongoing negotiations, the main deficiencies in the design and systems have been eliminated and the MiG-35 is ready for the start of full-fledged serial production. Thus, as early as next year, the air force can receive the latest multi-role fighter aircraft that meet the existing requirements for such equipment. The Russian Aircraft Manufacturing Corporation MiG, in turn, will receive a good financial incentive and will begin to correct its economic situation. Due to the lack of large orders in the past few years, MiG is in a difficult financial situation and the contract for the supply of aircraft will undoubtedly help it.

Ctrl Enter
Noticed oshЫbku Highlight text and press. Ctrl + Enter
We are
According to the results of the exhibition Le Bourget-2013Russia in the world market of new multifunctional fighters
Military Reviewin Yandex News
Military Reviewin Google News
122 comments
Information
Dear reader, to leave comments on the publication, you must to register.