How Ecuadorian President "was blown away" 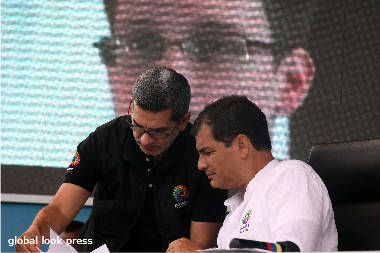 It seems that Ecuador was "blown away." And his American comrades "blew off", explaining to President Rafael Correa that it was not good to substitute his partners in such a way as to harbor "international criminals." That's what it is the latest news of the day about a man named edward snowden. The term “international criminal” of the United States implies Snowden, who some time ago poured information about the actions of the US special services, which were directly related to at one time.


Edward Snowden, as you know, flew to Moscow with the aim of moving to permanent residence in Ecuador. At the same time, Snowden was issued transit documents by the consul in London after he met with another man persecuted by the United States, Julian Assange. Now, President Correa put on his pants, realizing that he couldn’t pull the US against the same gentlemen against the United States, he decided to play back, saying that while Snowden was not in Ecuador’s territory, he did not have to wait for political asylum in that country. Correa even canceled the transit documents, calling the consul in London a man who had exceeded his authority. In all likelihood, this understanding of the situation in the Ecuadorian president manifested itself after his negotiations with Joe Biden. As the saying goes, "Joe, and you know how to convince!"

Meanwhile, a number of information agencies have information that the transit documents of the consul of Ecuador in London simply could not issue without the permission of the authorities of Ecuador - the government and the presidential administration. It turns out that Correa is also lying, trying to justify himself in front of the “democratic” world that already threatens Quito with his fist.

And after such News it becomes clear that the fate of Snowden is in the hands of the Russian president. If Putin, too, caved in under pressure from American partners, then this will be the option exactly the same as that presented by Correa. If Putin shows real rigidity in this matter, he will be able to crush the United States along with all the Magnitsky’s acts and the arrests and trials of Bout. The situation, which the Russian president is simply obliged to take advantage of, to put the whole "democratic" riffrader in place, accusing him of persecuting people for political reasons. Whether the Russian president will allow himself such a thing will be clear already in the near future.
Ctrl Enter
Noticed oshЫbku Highlight text and press. Ctrl + Enter
We are
Snowden seeks political asylum in Russia
Military Reviewin Yandex News
Military Reviewin Google News
104 comments
Information
Dear reader, to leave comments on the publication, you must to register.