Strengths and weaknesses of Serval 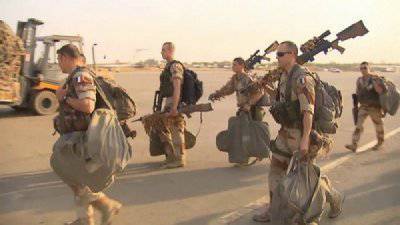 The Government of Mali and the Tuareg tribes occupying the northern territories agreed on a cease-fire. In accordance with the document signed in the capital of Burkina Faso Ouagadougou, Tuareg separatists will add up weapon, after which the Malian army will be able to return to the key city of Kidal in the north of the country. The transfer of the city to the authorities will take place before the presidential elections scheduled for July 28. “We can say that the biggest challenge is solved. We have reached agreement on major issues, such as the integrity of our territory, national unity, as well as the secular and republican structure of our state, ”said Mali Tiebile Drama at the talks with the Tuaregs.


As is known, the situation in this country worsened at the end of last year, when Islamists associated with Al-Qaeda from the north launched an offensive in the south of the country in order to bring the entire territory of Mali under control. After that, France sent troops to Mali to help local authorities regain control of the north of the country. In the course of Operation Serval, in which, along with the French, military units of some African states took part, it was possible to destroy most of the Islamist rebels and their infrastructure and expel the rest of the country. France stated that it had completed its mission in Mali and began withdrawing troops from that country. At the same time, many in Mali believe that France did not complete its mission.

And in France itself there is no unambiguous assessment of the actions of troops sent to Mali. According to the leadership of the country and the armed forces, Operation Serval was carried out successfully both militarily and in practical terms. “I had all the necessary funds at my disposal, as evidenced by the results of the campaign,” General Gregoire de San Cantant, who led the operation, commented on the situation for the La Croix newspaper. The official publication of the French Ministry of Defense is of the opinion of senior management and writes about the high technical equipment of the hostilities: “Some statistics: 4.000 soldiers were involved in Serval. For comparison: in Afghanistan, the number of ground troops did not exceed this figure. In the course of the battles, hundreds of military equipment of all types were also used: armored personnel carriers, infantry fighting vehicles, CAESAR self-propelled artillery, special forces, helicopters, drones, fighters of the French air force, as well as naval aircraft aviation. We can say that from the point of view of security, this was one of the most important operations carried out by the French army over the past 50 years. ”

Especially successfully, as emphasized, operated aircraft. So, for the period from January 11, when the operation was launched, by February 13, the French pilots made more 970 sorties. This number includes both combat missions and transport missions. Fighter aircraft were deployed during this time over 200 times, however, not always combat vehicles of this type were used to destroy enemy personnel and infrastructure. In particular, the fighters were also involved in performing reconnaissance missions. Directly, air strikes against bases and militant formations during these sorties were inflicted “more than 170 times”.

Three French Harfang unmanned aerial vehicles, whose crews and ground technicians are part of the ED-1 / 33 Belfort squadron in Mali, exceeded 1.600 hours. These vehicles, based in Niger near the border with Mali, provided support to the ground forces. Information from the drone board came to the commanders of units, providing them with a good situational awareness in the area of ​​hostilities. The UAVs also interacted closely with the aircraft of the French Air Force and Navy. On board the UAV, laser designators were installed, with the aid of which ground targets were illuminated and high-precision munitions dropped from French aircraft were aimed at them.

At the same time, according to military experts, there was obviously not enough unmanned aerial vehicles to detect insurgents in time, search for suspicious activity and escort convoys in large areas of Central and Northern Mali. In addition, French UAVs are not armed, and fighters-bombers must be aimed at the targets they have discovered. However, the biggest problem, if we talk about the actions of aviation, were tanker aircraft, or to be more precise, their shortage. Even the small number of combat aircraft involved in the air strikes, the French air force could not provide the necessary fleet of tankers. That is why the United States sent its X-NUMX COP from the English Mildenhall airbase. Other countries have also proposed their own refueling aircraft. The relatively small military operation "Serval" also had to use transport planes of other countries to help in the deployment of French troops in Mali.

The newspaper La Croix writes about other weaknesses of the actions of the French troops in Mali. “Operation Serval,” she notes, “highlighted a number of weaknesses in the French army: inadequate equipment, outdated equipment and its malfunctioning ... It is hard to believe that this did not affect the force of the strike and the mobility of the French troops. ” Problems with technology arose not only on the ground, but also in the air: “The French troops had the opportunity to determine the location of jihadists. But, based on the capabilities of the helicopter fleet, they could not strike at enemy locations. The absence of free helicopters saved the lives of many ringleaders. If the French troops had been given at least four dozen helicopters, they would still have bombed the jihadist undergrounds. ” According to the newspaper, saved on everything, even in the manufacture of hiking boots for soldiers, which quickly went out of order. Many fighters had to borrow it from their comrades who did not participate in the hostilities.

In total, based on the report of the General Staff of the French Armed Forces, submitted by 22 in May, the funds for financing the operation “Serval” amounted to 300 million euros.