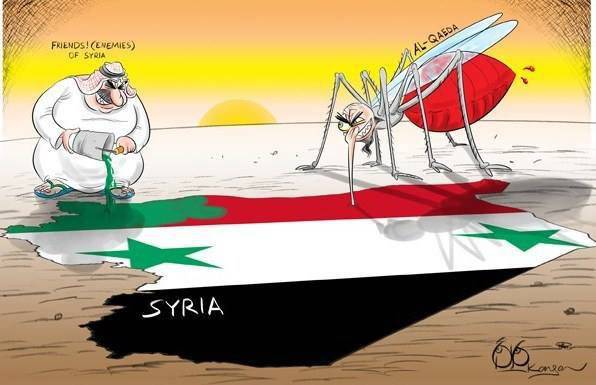 Another mortifying atrocity was distinguished by scumbags, “oppositionists” in Syria. In the province of Aleppo, a helicopter flew over the city of Noubl, carrying seven civilians. These were the employees of the Ministry of Education, teachers, who faced an important and noble task - to ensure the delivery of school examinations for the ninth grade in the cities of Nubl and Zahra. They were transporting the necessary documents for this, tickets for schoolchildren who had not yet passed the exams, and sheets with the answers of those who had already passed.

One can only imagine how difficult it is to organize a normal educational process in conditions when gangs of terrorists operate in the province, when many neighboring villages are seized by extremist mercenaries from 29 countries of the world who rushed into the province from neighboring Turkey. I remembered one of the kindest Soviet children's books — Valentina Oseeva’s work Vasek Trubachev and His Comrades, where a group of pioneers and dedicated teachers during the war years make great efforts so that children can go to school, listen to cheerful calls to a lesson and gain knowledge . Their well-equipped school was given to a hospital for wounded soldiers. Approximately the same thing has to be done to many Syrian teachers, children and their parents - in the present conditions the path to knowledge is very thorny. Sending a child to school, mothers worry, not knowing whether he will return or not. During the mortar attacks, explosions and other crimes of terrorists killed a lot of schoolchildren and students.

Often, children have to work in classes where there is not a single window, and the walls bear signs of sniper bullets. Part of the schools was seized by militants who built their bases, headquarters, warehouses weapons and even torture chambers. After the army liberated these areas, such schools could not be walked for a long time, since the rebels desecrated everything they could into them. And in the territories where the bloody hands of the “oppositionists” gangsters did not reach, the government had to give part of the schools as temporary accommodation centers for people who, because of the same gangsters, were forced to leave their homes.

It is difficult for me to remember how last summer I personally observed how the bodies of people killed by the militants, including three teachers from the local school, were removed from a pit with construction debris on the outskirts of Damascus. In early December last year, in the suburbs of Damascus, Al-Wafidin, 29 children were killed and wounded, their teacher was killed. 21 February of this year, a terrorist attack occurred in the center of Damascus, in which teachers and students of a school for girls were injured. Do not count the number of petty terrorist attacks that carry away the lives of 1-2 people, including schoolchildren and teachers - schools have become targets for “oppositionists” who in every way seek to disrupt the educational process, because it is part of a normal life so hated by them ...
And the teachers flying in the fateful June 30 in a helicopter over the province of Aleppo did not get to their students.

A thermal missile fired by the rebels hit a helicopter. In addition to teachers, the crew members were also killed. All the "fault" of these people consisted only in the fact that they honestly fulfilled their professional duty. No one survived ...

Among those killed was Honored Teacher, Deputy Head of the Department of Education in the Province of Aleppo, Husam Muhammad Yousef.

The brutal crime against representatives of one of the most peaceful professions was sharply condemned by the Trade Union of ATS teachers, who declared: “The teachers carried light and intelligence to their students. They opposed the dark ideas of those who kill innocent people and destroy the structure of society ... The task of teachers is to educate a person. They will always resist extremism aimed against the intellectual potential of Syria. "

Syrian Prime Minister Vail Al Khalki called this brutal murder a cowardly act and stressed that it was committed after the terrorists failed to hinder the progress of the educational process in Syria and break the determination of the teachers who continued their educational activities. He also said that this atrocity will not break the Syrians, but will only make the Syrians even more resilient in the fight against terrorism.

The terrible crime was also condemned by the governor of the province of Aleppo, Muhammad Vahid Akkad, the leadership of the committee of the Arab Socialist Revival Party, the Union of the Youth of the Revolution of Syria (youth organization under the PASV), deputies of the SAR National Council and many other public figures. They expressed their condolences to the families of the victims. “This is an attempt to perpetuate ignorance and backwardness, to stop the educational process, to stop the pulse of life that continues, despite all the challenges,” said the statement of the Union of Revolution Youth. “But despite this and other atrocities of terrorists, the enemy will not be able to raise the morale of the armed groups, which every day more and more weakens before the power and valor of the Syrian Arab Army.”

Grieving over the dead innocent people, we must ask the question: are the only terrorists who staged this bloody atrocity guilty of the death of these honest citizens who worked in the most difficult conditions?

No no and one more time no! Without the support of the West, the United States, Turkey, Saudi Arabia, Qatar and other countries - both colonial predators and their obedient tools - the terrorists would have neither MANPADS, nor thermal missiles, nor the majority of the deadly means with which they kill!
Back in September last year, when it became known about the first shipments to the Syrian insurgents, they began to threaten to shoot down civilian aircraft. Then Deputy Foreign Minister Gennady Gatilov, who opposed the decision, said: “The Syrian armed opposition now threatens to shoot down civilian aircraft in Syria. This is the result of the irresponsible transfer of MANPADS into their hands. ”

Since then, there have been several incidents of attempted bombardment of passenger airliners, as well as airports. Fortunately, until now accidents that could have led to the death of many passengers, could be prevented. But the helicopter with the teachers turned out to be more vulnerable ...
At the last meeting of the so-called "friends of Syria", which was held in the Qatari capital Doha, representatives of the Foreign Ministry of 11 states reiterated the need to increase the flow of weapons for the "oppositionists". As some European gentlemen have cynically stated, “this would make it possible to equalize the balance of forces between the army and the opposition.”

Gentlemen in expensive suits and ties, reasoning at Qatari tables about the "balance of power" in a foreign country, do not want to think that their reasoning only inspires the bandits to new atrocities. With their every decision, more and more blood of innocent people is being shed. And each machine gun, each rocket, each cartridge, delivered to them by the rebels - leads to new and new deaths, to tears, suffering and irreparable losses.