July 1 2013
5
Deck multifunctional helicopter EH-101 Merlin was designed to solve various transport problems, conduct reconnaissance and destruction of naval targets. The European Helicopter Industries consortium was established in June 1980 by the Italian company Agusta and the British Westland for the joint design, production and subsequent sale of an improved military helicopter EH-101 Merlin. For the first time, the rotorcraft climbed into the sky 9 October 1987 year. In 1997, the company received a contract for the serial production of helicopters for the British armed forces. In June 2007, the name of the multi-purpose helicopter EH101 was replaced by AW101 (AgustaWestland).


Initially, the helicopter was built for the needs of the fleets of England and Italy. Initially, it was designed as a sea-based deck helicopter, modifications of which, depending on the country of destination, differed in the installed equipment. These helicopters could be used both for independent anti-ship and anti-submarine operations from the deck of destroyers at sea roughness up to 6 points, and for conducting search and rescue operations, for REP and reconnaissance. The maximum time for antisubmarine operations or patrols is up to 5 hours.

Military transport and multipurpose helicopters EH-101 "Merlin" were designed to transport paratroopers 30 at a distance of 370 km, or transport in the cockpit of various military equipment weighing up to 1,5 tons. The helicopter could carry the Land Rover all-terrain vehicle through the air, for which there was a cargo hatch in the tail end of the car, equipped with a descending ramp. It was also possible to use a helicopter in the sanitary version. In this form, the helicopter could carry up to 16 wounded on stretchers. The distillation range of the car with the use of additional fuel tanks was 850 km. 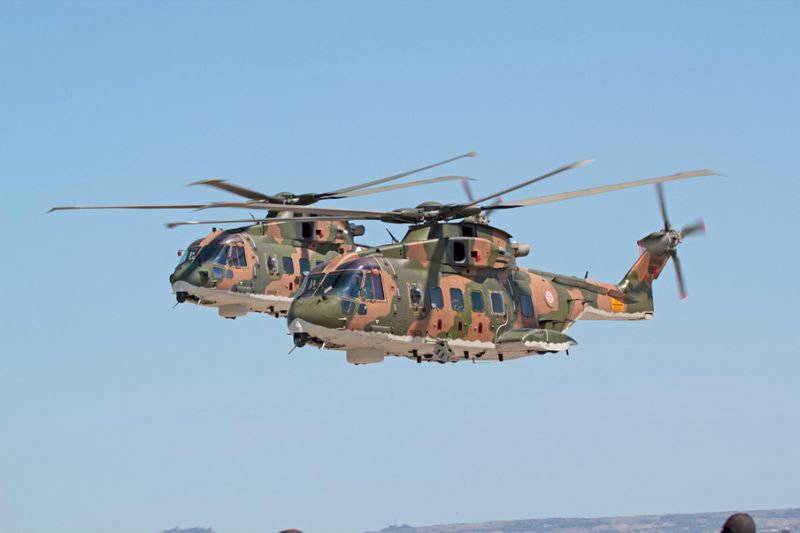 The EH-101 / AW101 “Merlin” helicopter is designed in the usual way with a five-bladed rotor and four-bladed steering rotors, as well as with a three-engine powerplant and a retractable wheeled chassis retractable in flight. In the design of the fuselage of the helicopter, as well as the entire machine as a whole, composite materials were very widely used. For all 3-x variants of the helicopter (deck, transport and passenger) were created unified metal front and center parts of the fuselage. The rear part of the helicopter fuselage in the transport and airborne version was equipped with a cargo hatch and ramp for loading and unloading large-size cargo or wheeled vehicles, and the tail beam of the anti-submarine version of the helicopter was made folding. 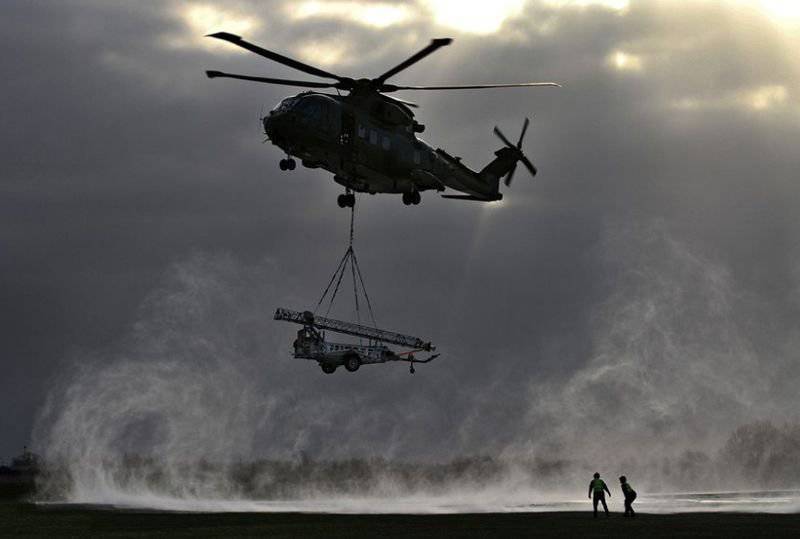 The cockpit was located in the front of the fuselage, which in the standard version is double, but in the antisubmarine version there are additional seats for the observer and the weapon systems operator in the cockpit. The crew members of the helicopter are placed on special energy absorbing seats, which are designed to perform a hard emergency landing at a vertical speed up to 10.7 m / s. The equipment installed in the cockpit, to a large extent depends on the version of the helicopter. In this case, in all variants, multifunctional color displays are widely used to display all the necessary navigation and flight information.

The EH-101 “Merlin” helicopter is equipped with a three-post wheeled chassis with a wide gauge. Racks of the helicopter chassis are equipped with shock-absorbing devices that provide the absorption of impact energy in the event of a hard landing with a vertical speed of up to 5.5 m / s without deformation of the chassis structure. 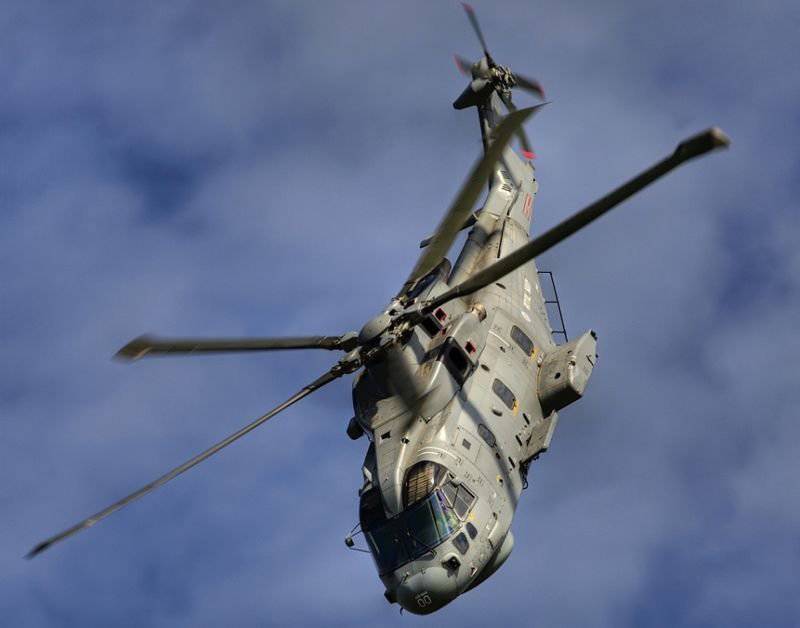 CT7-6А engines from General Electric, which have take-off power in 1430 kW, are used in passenger and transport helicopter powerplants. The helicopter’s intra-body tanks hold a supply of 3437 liters of fuel. To reduce the fire hazard of the power plant of the helicopter, protective titanium partitions were mounted between the engines. Engine control is carried out using electronic control systems, which is duplicated by a backup mechanical.

The EH-101 “Merlin” rotor has five blades that are made of carbon fiber and are attached to the hub with elastomeric bearings. The propeller blades have paddle-shaped tips, which improve their aerodynamic characteristics.

In this case, the rotor blades of the helicopter in the anti-submarine version can be folded back. The helicopter's tail rotor is four-bladed; its blades are also made of composite materials. To use the helicopter in the conditions of the North Atlantic, anti-icing systems are mounted on the blades of both propellers, tail assembly, air intakes of the engines, as well as the glazing of the cockpit. A multi-purpose helicopter for cargo transportation can be equipped with a cargo cable, which is designed for a force up to 5445 kg.

In the standard version, helicopter armament is mounted only on the anti-submarine version. The 4 anti-submarine torpedoes Mk.46, or 4 depth bombs Mk.54, and also 2 anti-ship guided missiles Sea Eagle can be placed on board the helicopter. To use this weapon, the helicopter is equipped with the “Blue Kestrel” surveillance radar, as well as a lowered sonar station with a hydrophone cable length of 450 meters. The helicopter can also use radio-acoustic buoys equipped with an acoustic information processing system. 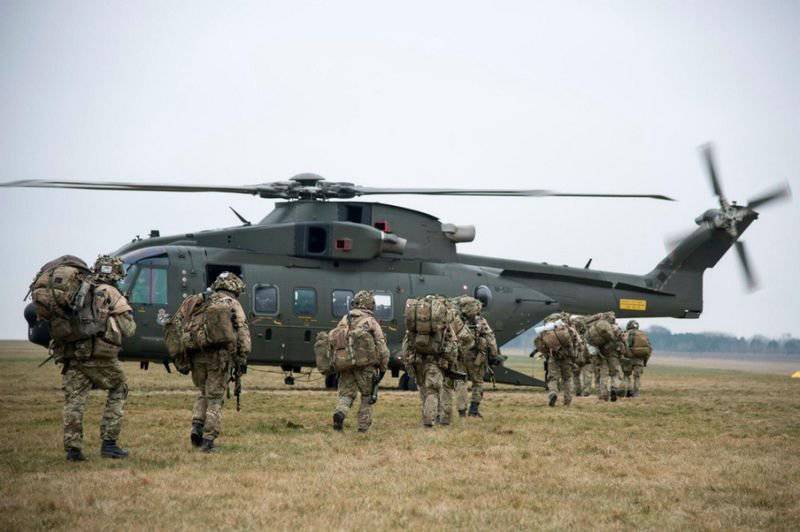 The AgustaWestland AW101 helicopter, which proved itself as a helicopter of the European naval forces and was very well-known (until June 2007, was called EH101), has been actively used in various countries by search and rescue services in recent years. The first three states in which Merlin was hired for this role were Canada, Portugal and Denmark. You should not be surprised at this: the helicopter has an impressive potential. In 1980-s, being specially created to combat submarines and ships as a replacement for the Sea King helicopter, the helicopter combined a large number of technical innovations into the undercarriage and airframe design.

The AW101 helicopter can carry more than 30 people, carry out search and rescue operations at a distance of up to 450 nautical miles (about 830 kilometers) from the place of deployment and meets the most stringent requirements of the search and rescue services. The dimensions of the helicopter do not prevent it from working with various cargoes: although the downstream power is 15% higher than that of the Sea King helicopter, the “bagel effect” under AW101 allows installers to work under a hanging helicopter without experiencing any problems.

On the EH-101 / AW101 “Merlin” helicopter, a very large cargo hatch is installed, which, despite the drop-shaped lights installed in front of the fuselage, can swing open on the 2,5 m. On Danish and Portuguese search and rescue helicopters that do not have a drop-shaped flashlight on the starboard side, the hatch can open even wider, which makes it easier to lift the stretcher on board the helicopter. Since 1997, more than 100 EH-101 / AW101 Merlin helicopters in military transport and multi-purpose have been delivered to the UK, Italy, Canada, Portugal, Denmark and Japan. 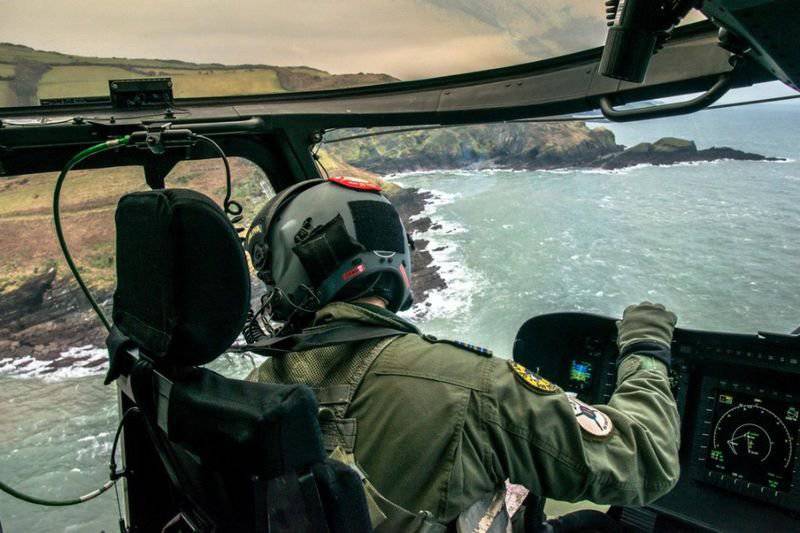