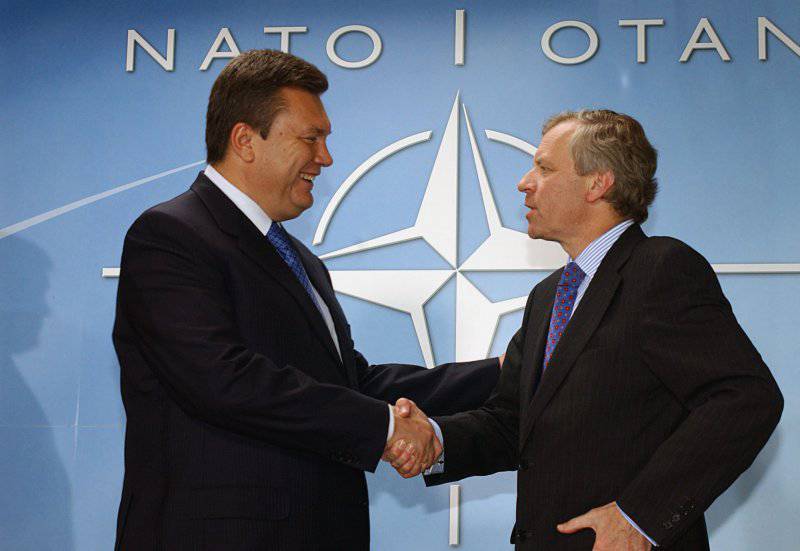 A few days ago a bill was introduced in the Ukrainian parliament to introduce some changes in the laws of Ukraine, in particular, regarding the country's course in foreign policy (the acquisition of full membership in NATO). The author of the bill was the Opposition MP, a representative of the Batkivshchyna Party, Vyacheslav Kirilenko. Despite the fact that the text of this document is not available on the website of the parliament, the author of the draft itself says in his comments that the main purpose of adopting this bill is to abandon the non-blocking policy of the Ukrainian state in the field of national security, as well as to fix the country's policy at the legislative level for full membership of Ukraine in the North Atlantic Alliance. In particular, Kirilenko says that after Viktor Yanukovych was elected head of state in 2010, the government announced that it intends to change the country's course in implementing foreign policy security, defined in 2003 by the law “On the Fundamentals of Ukraine’s National Security”. The essence of the law was that Ukraine seeks to acquire membership in NATO - the most effective in the world and the only European collective security system that was created within the framework of the alliance.

Kirilenko also noted that the state refused to receive guarantees to ensure territorial integrity, state sovereignty, the inviolability of state borders, choosing instead military neutrality, which is unprofitable in modern conditions from the point of view of politics, economy and state security. He also expressed confidence that Euro-Atlantic integration will help accelerate the process of European integration and bring Ukraine’s entry into the European Union closer.

Earlier, in 2010, the Ukrainian parliament passed a law on the non-aligned status of the state. According to this document, the basic principle of Ukraine’s foreign policy is to observe the non-bloc policy of the state, that is, non-participation in military-political alliances and organizations, participation in the development and improvement of the European collective security system, as well as the development of constructive cooperation with the North Atlantic Alliance and other international organizations and military-political blocs on all issues of interest to both parties.

Due to the inconsistency of the situation, it makes sense to analyze whether Ukraine should join NATO or not. Judging objectively, experts say, the non-aligned status of the Ukrainian state can provide it with much more than a hypothetical membership in the bloc. First of all, it should be noted that non-alignment means that no one in the world regards Ukraine as a source of a real threat. In addition, non-alignment does not contradict the course towards European integration. And in the event that Ukraine becomes a member of the European Union, the EU will be replenished as the seventh non-aligned state after Sweden, Austria, Finland, Malta, Ireland and Cyprus. What is not unimportant is that the non-aligned status will help to remove from the agenda the very problematic issue of Ukraine’s membership in NATO, which causes many problems in building trust relations between Kiev and the key EU states. In the end, the leading heads of state are much more willing to support the entry into the European Union of a peaceful, non-irritating state. In addition, non-alignment contributes to the establishment of a new level of trust between Ukraine and its main partners, creating favorable conditions for the development of trade and economic relations.

In addition, the non-aligned status will not jeopardize Ukraine’s relations with the alliance and will not become an obstacle to the participation of the Ukrainian state in international peacekeeping operations and missions, but with one advantage — the country will decide which missions to participate in, which forces to use and whether to do it at all. Ukraine will still be able to attract NATO experts in the course of military reform.

It is also important that the non-aligned status is one of the few factors that are currently able to somehow unite the eastern and western regions of the country, because this idea is supported by the majority of the Ukrainian population. Out-of-blockingness fully responds to the reluctance of the Ukrainians' unwillingness to take part in foreign armed conflicts.

And yet - even if Ukraine becomes a member of the North Atlantic Alliance, there are no guarantees that, if necessary, in the event of an armed conflict, the members of the bloc will be able and willing to help her.

As for Ukrainian analysts and experts, their opinions as to whether Ukraine should look for ways to join the military-political bloc or maintain its non-aligned status are divided.

Thus, according to Vasily Stoyakin, director of the Center for Political Marketing, after Viktor Yanukovych came to power, little has changed in the matter of relations between Ukraine and NATO. After the adoption of the law on the basics of foreign and domestic security, which presupposes the non-alignment of the state, the legislative acts that provide for the change of the Ukrainian armed forces according to NATO standards have not changed. And this, according to the expert, provides many opportunities for maneuvers of the Ukrainian political elite. Thus, at any time there is a threat that any power, real or future, will be able to note the law on state security without any problems and join NATO.

As political scientist Alexander Paly predicts, a rapprochement of the Ukrainian state with the North Atlantic alliance is quite possible. The fact is that between the two parties there are some common interests, in particular, in the field of security in Europe. Neither side wants war, the emergence of millions of refugees, the redistribution of borders. Therefore, according to the expert, even with the existence of a non-aligned status, the convergence process can be accelerated.

Similar optimism does not share the deputy Anatoly Seminoga. Without abandoning the prospect of Ukraine joining NATO, the politician at the same time says that the internal policy of the state currently does not provide an opportunity to move towards gaining membership in the bloc.

According to the communist Alexander Golub, the entry of Ukraine into the North Atlantic Alliance is inexpedient. The politician is convinced that NATO is just an improvised means of America for carrying out its policy in Europe, which does not provide for the existence of Ukraine as an independent state, and using it as a pawn in political games with Russia. Therefore, until the essence of the block changes, it is unproductive and pointless to consider the question of joining it. According to A.Golub, the majority of the Ukrainian population shares such thoughts. And if the majority of residents opposes membership in NATO, then the acceleration of the process of rapprochement between the parties is not in the public opinion or national interests.

Vasyl Volga is convinced that the North Atlantic Alliance is currently irrelevant for Ukraine, and that there are other, more interesting projects. According to the politician, the alliance has lost its value and can no longer provide the proper level of protection. In addition, Ukraine needs its own efficient modern army, and not the hope that someone will protect it in case of anything.

Thus, it can be concluded that in theory most experts theoretically allow Ukraine to join NATO, but in the distant future. And the situation currently remains unchanged - Ukraine does not cease to cooperate with the military-political bloc, but does not think to enter yet. And how events will develop further - life will show ...

Ctrl Enter
Noticed oshЫbku Highlight text and press. Ctrl + Enter
We are
Situational analysis of the death of the MH17 flight (Malaysian Boeing 777), made on the basis of engineering analysis from 15.08.2014Results of the week. “You do not know what to do? Fell - wrung out! "
Military Reviewin Yandex News
Military Reviewin Google News
121 comment
Information
Dear reader, to leave comments on the publication, you must to register.