July 1 2013
2
It will be about the March (1986) military conflict or, if you will, the military operations of the 6th fleet US in the Mediterranean against Libya. The Americans called this operation "Fire on the Prairie." 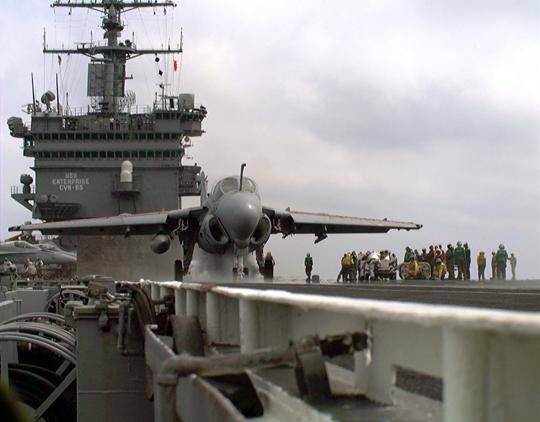 Takeoff attack aircraft from the US aircraft carrier. The course is Libya.

The intelligence of Libyan leader Gaddafi a month before it was already known that the US command plans to launch a series of attacks on the country with the use of OBK forces in the Mediterranean Sea and long-range missile aviation from the metropolis. By this time, the Americans and their NATO partners considered this country a hotbed of terrorism and set the task of physically eliminating its leader Muammar Gaddafi. In such situations, before that, in order to prevent a direct attack from the United States, the Libyan leadership asked the leadership of the USSR to bring our warships and ships to their main ports of Tripoli, Tobruk, Benghazi and others in the hope that the Americans would not put on them strikes if our forces are there. The same thing happened in March 1986.

By this time, another U.S. Navy carrier group was additionally introduced into combat service in the Mediterranean Sea. The Americans took up their initial positions in the central part of the Ionian Sea and began intensive combat training of aircraft carrier aircraft as part of attack aircraft, reconnaissance aircraft, and EW aircraft. In addition, a separate detachment of US warships consisting of 7-8 ships cruised along the parallel 32 ° 30 'sowing. latitudes at the border of Sidra Bay, which the Libyans considered their historical by the bay. To protect this conditional border, they put up all their available naval forces and assets. These are about 10 units of French-made combatant-type missile boats, about 10 Soviet-built missile boats, 1 KFOR, 1 submarine, and a few other small and support ships.

From our flotilla's forces participated: 2 ship tracking aircraft carrier groups (visual and radio tracking), one ship north of Tripoli - 180 miles, another ship north of Benghazi - 20 miles in the village. Tobruk - ship in the base.

In the settlement of Tripoli, a floating base “Dmitry Galkin” with the operational group of the flotilla headquarters was brought on board - I was appointed as the group senior. The group included: an air defense post headed by the head of the air defense of the flotilla, captain 1, rank AN Bulavchik, chief of communications of the flotilla, captain 1 of rank V.I. Sushko, political officer, Captain 2 of the rank of V.Ye. Vergiles, the two most prepared midshipman operators E.M. Podpletta, V.V. Grabovenko. 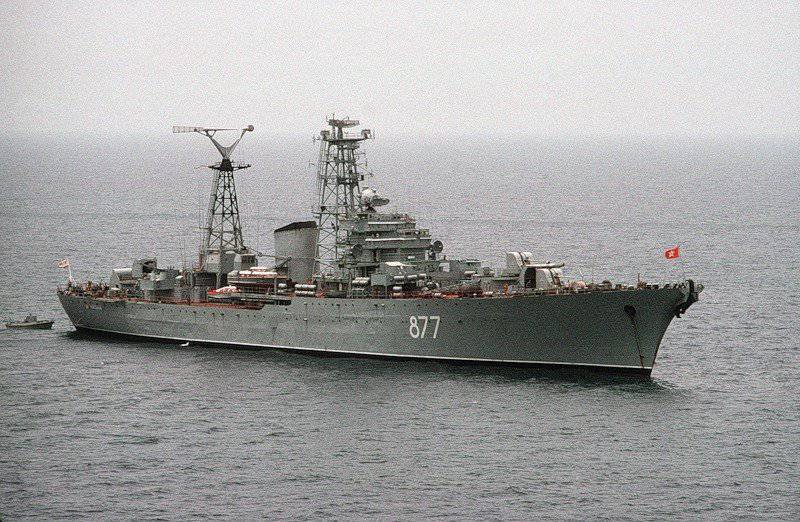 "Dmitry Galkin" mother ship, 1988 year
We were assigned the task of collecting and processing data from our air tracking forces on the air situation in the combat area and transferring it to the local command of Libya’s air defense. To this end, a Libyan air defense group was deployed on a pier at the floating base in a special vehicle that was connected to the General Headquarters of the Libyan Armed Forces. My direct duties included a daily two-time report on the ML of the Navy and at the command post of the flotilla on the situation in the combat area.

The local side was primarily interested in data on the mass take-off of carrier-based aviation from aircraft carriers and bringing this information to command for making a decision on the use of air defense forces to repel air strikes. Then, modern Liberal-type fighter aircraft manufactured by the USSR, air defense missile systems of the C-75, C-125, C-200 systems deployed along the northern coast of the country were part of the Libyan air defense forces.

Events developed as follows. The Americans did not use the previously developed methods of applying massive strikes by carrier-based aircraft against enemy bases. Knowing perfectly well the capabilities of the Libyan air defense, the flights of the aircraft were carried out by small groups of 2 – 3, sometimes up to 5 aircraft. They, teasing the Libyans, flew, violating their airspace over the Gulf of Sidra and even over the land territory of the country. The same tactic was used by the squadron of warships on the border of the Gulf of Sidra, going for a short time to the south of the parallel 32 ° 30 ', without using weaponsas if causing "fire on oneself."

A representative of the adviser to the General Staff of the Libyan Navy arrived to us at the floating base with a request from the local side to allocate a direct tracking ship for the ACS in the Gulf of Sidra, so that, according to its tracking data, they would strike at the ACL with coastal missile launchers. However, neither the Main Headquarters of the USSR Navy, nor the flotilla command took this step, I suppose, fearing that our tracking ship could suffer during the battle. Honestly, and we are not very "light" to expose his chest. Over time, this is well understood. But at that time we were not asked, we had to execute any order of command.

This "flirting" continued until 18 in March, while the nerves of the Libyan air defense command failed, and 4.30 was hit by calculating a rocket launcher from the area of ​​the city of Homs on 2 aircraft that violated airspace over Libya. By the morning, enthusiastic rumors had reached us that the targets had been hit, and an uplift reigned in the camp of our “allies”. Subsequently, our intelligence found that, indeed, one of the aircraft was damaged, but both of them still safely returned to the aircraft carrier.

The response was not long in coming. Immediately, before dawn, deck aviation responded to the coastal installations of the Libyan air defenses, and quite effectively. In particular, the “Harpoon” rocket fired near the city of Homs hit the radar target detection device directly. This was reported to us by the chief military specialist in Libya from the USSR Armed Forces, Lieutenant-General V.V. Zhdanov, who asked Moscow to urgently send a new antenna.

In the morning, 8.00 was attacked by Libyan ships, which were located along the parallel line 32 ° 30 ', by OBK and carrier-based aircraft. The blow was ruthless, cruel and meaningless, given the superiority of the forces of the US 6 fleet. Almost all the ships that were there were destroyed. The eyewitnesses later said that the superstructures of the ships, the logs and the deck devices had suffered. The rockets literally demolished the entire top of the boats with the command together. The specialists of the internal combat posts and the specialists of the engine rooms remained alive. People in the water were finished off with machine-gun bursts from the OBK helicopters. We witnessed how the wounded and picked up corpses after the massacre were brought to the base with boats to secure it. The submarine and the damaged KFOR, and 2 – 3 boats from all the forces of the Libyan navy that participated in the so-called battle returned to the base. 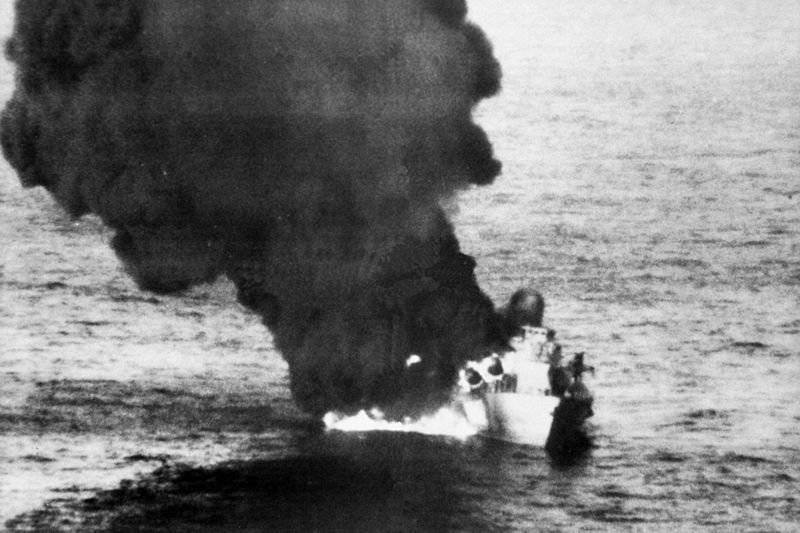 Of course, we expected strikes on Tripoli and prepared for this. First, we were put in the port in such a way that we covered the remaining boats and submarines in the base of the mother ship that had not been put to sea for one reason or another. This, naturally, put us at a disadvantage. Secondly, the armament of the old floating bases - fire and radio-electronic - was not so hot. With the Fut-4 air detection station, we could, if we could, find low-flying “Harpoon” rocket with a small reflection surface, then at very small distances. To get into it, shoot down the artillery with a fire - "weaving" or anti-aircraft guns - is very problematic. Third, by operating radar for detecting airborne targets, on the contrary, we could have aimed at Shrike missiles homing on working radars.

I invited the commander of the ship, heard his decision on self-defense, and we together with him came to the conclusion: in this situation, there are no other means besides the EW means for their defense.

On this basis, at the 200-meter ends, the 3 was equipped with large inflatable corner reflectors, and in the arches and artillery grabs there were passive interference shells in readiness for combat use according to the scheme developed by us, taking into account the closest vessels and coastal facilities.

God had mercy, and we didn’t have to actually apply all this, because this time the fighting ended. Carriers continued to patrol near the coast of Libya, but none of the countries any more carried out combat operations. True, the fighting with the use of long-range missile-carrying aircraft from the airfields of the metropolis along Libyan coastal objects continued in April. But by that time, our ship base was replaced by another one, and the flagship specialist of the RTS Flotilla, captain of the 1 rank, V.A., replaced me as a senior task force. Lobachev. Of course, the second war is no less interesting from the point of view of the use of forces by the parties (Operation Eldorado Canyon). 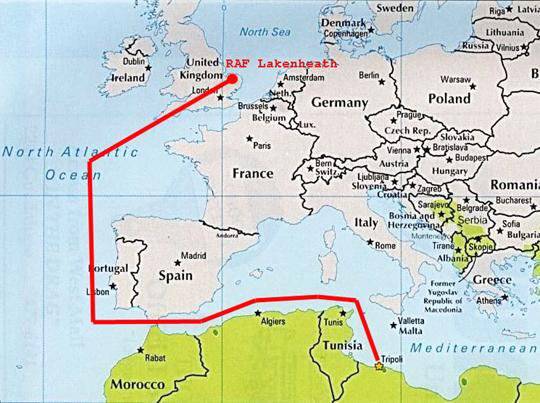 The route of NATO aircraft, taking off from the airfield of Great Britain and attacking Libya.
Subsequently, with the advent of the "base" (point 52), we produced a detailed report on both conflicts with conclusions and suggestions.

I would like to share my impressions of how the personnel behaved in combat conditions. On the floating bases, as a rule, officers, warrant officers and sailors, as they say, "increased risk", often written off from other ships, having disciplinary penalties and other offenses, served. Compared with the personnel of the rest of the squadron warships, they differed not for the better in terms of performance, and training, and, finally, in appearance, although they had, perhaps, easier conditions of service than on warships. If it was possible to talk about it in the conditions of combat service in general. The weather conditions on the football field are the same for both teams ...

So, for the month of performance of the combat mission, not a single case of violation of military discipline, God forbid, disobedience, was recorded in any combat unit. The officers, even the most obstinate, died down, were ready to immediately execute any order. Caught orders, figuratively speaking, directly from the language of the commander. The sailors and foremen also became subdued, and, as it were, rallied, huddled together. We were confident that they could do more of what they could do.

Time passes. And now, being a veteran of the squadron, I would like to once again go out to sea, to the point of 52 and, perhaps, to look into the eyes of the same veterans of a potential enemy - "amerikosy", as we called them, with whom we once were ready " tearing each other's throats. " We once envied their conditions of service and rest in military service, they probably appreciated and respected our restraint and "unpretentiousness" to these conditions, most likely sympathized. Still, the tropical conditions of service, the iron hull, heat, dust storms from the mainland, storms, and rare visits to ports were worth it.

Ctrl Enter
Noticed oshЫbku Highlight text and press. Ctrl + Enter
We are
Libyan revolution and its leaderDiplomats of the People's Commissariat of Defense: on the eve and during the war
Military Reviewin Yandex News
Military Reviewin Google News
2 comments
Information
Dear reader, to leave comments on the publication, you must to register.