Fun of the Two-faced Janus 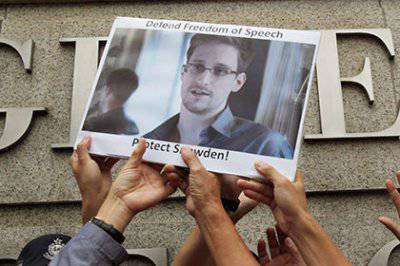 It seems to me that it is difficult now to find a person who has not heard such a “simple American surname” as Snowden at least once. The young American “nerd” of a subtle physique, quite unexpectedly for everyone (I think, for himself too) became the cornerstone of the relationship between a number of countries, including such giants of international politics as Russia and China! This is a phenomenon. But not in the sense that it is something out of the ordinary (dissidents have met and are meeting everywhere and always), but in the sense of that unprecedented and frantic noisy reaction that followed from the "main pillar of the democracy of the whole world." Well, the situation itself, as such, is similar to those that have arisen before. It’s enough to illustrate their presence to recall the frictions that arose on the occasion of the flight abroad of Kalugin, the tough confrontation on the occasion of the detention by the Soviet secret services E. Pope, for the sake of the liberation of which the US was ready to put relations between the USSR and the USA to the brink of open confrontation. But if these two cases and many other, less visible ones, were in the nature of a purely struggle to protect their military-technical secrets and the hunt for strangers, the latter case, to a greater extent, acquired a moral and political tint.


Trying to get Snowden back "in the bosom of democracy", the Americans here are trying more to save the "good name" of their special services. But the train is gone. As stated in the joke - "... Died, so - died." If the struggle “for an honest name” arose, so to speak, “from scratch” i. if this name would not have been discredited by so many examples (Afghanistan, Iraq, Guantanamo Prison ...), then one could listen to the eloquent accusatory speeches of American diplomats and blush from accusations against Russia, and listen to requests for extradition of E. Snowden , but something interferes, something holds ... What? And the fact that recently the States themselves have prepared the ground for such an attitude towards themselves. Everyone knows the "odyssey" of Russian citizen Bout, captured by US intelligence services in one country on trumped-up and provoked charges and transferred to another prison. And all this is “in defense of interests”, and appeals to heed the opinion and evidence of the Russian side are successfully broken down like raindrops on the windshield of a speeding car. So how can you defiantly ignoring the arguments of the partner (as is often stated in political statements) and simply stepping over his opinion, expect grateful attention from this partner? It was here that a situation happened when a high-handed burglar gets a “turn-around”. And it does not cause much indignation. Is that light gloating ... But, what really revolts?

And it is outraged that, being carried away by accusations against Russia because of its unwillingness to extradite E. Snowden on demand, the staff members, as they say, “lured the shores”. Everywhere, all over the world, the postulate, faithfully observed (supposedly!) By the American authorities - the rule of law, was impatiently driven into the heads of people. And here, in a situation with a fluent CIA-shny intellectual, we see how this postulate is simply reduced to the status of telephone law. In a situation where there is no agreement between Russia and the United States on the mutual extradition of fugitives, American diplomats initially simply arrogantly demanded, and now appeal to conscience in their attempts to force Russia to return Snowden to their beloved homeland, thereby offering Russia to violate international law and violate just the rights of the individual. And what Russia would look like in the eyes of the world community if it were caved in or falsely ashamed of American reproaches.

One thing is clear - in the situation when the situation of dragging various kinds of secrets carriers to themselves was beneficial to the States and it seemed that it would always be so, they safely evaded numerous appeals from the Russian side to sign an agreement on the extradition of refugees. And when the situation began to evolve backward, proposals to consider the signing of such an agreement were already voiced. So what is this phenomenon - the rule of law in the States? It seems that the US legislators themselves will be in difficulty if asked about it. Because we have an excellent opportunity to observe one of the manifestations of the principle of double standards that is no less familiar to many. From this conclusion - the Law - it is and the thing is good. But in practice, following the principle of the rule of law in the States is the worship of the two-faced Janus - I say one thing and do another. And it is good and significant that it can be seen not only from the Russian limits. Ecuador (a small dwarf in comparison with the States), defending its moral principles and international authority, is ready to complicate relations with the States and the loss of significant trade preferences. And one more good thing is that Russia in this case is very well in the role of just a champion of international law and a guarantor of human rights.

So, good luck to us all and happiness in our country, colleagues.

Ctrl Enter
Noticed oshЫbku Highlight text and press. Ctrl + Enter
We are
A great interview with Sergey Lavrov: about Ukraine, Obama and IranWhat you didn't want to know about England
Military Reviewin Yandex News
Military Reviewin Google News
45 comments
Information
Dear reader, to leave comments on the publication, you must to register.