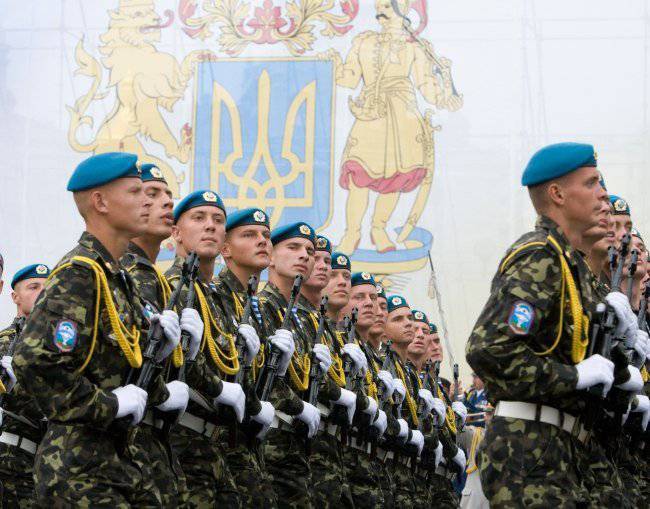 The Minister of Defense of Ukraine Petro Lebedev stated that since 2014, service in the Armed Forces of Ukraine will be fully carried out on a contractual basis. Moreover, until 2017, the number of troops will be reduced from 180 thousand to 122 thousand. In addition, it is planned to modernize existing equipment - primarily military aviation, anti-aircraft systems and radars. The Ministry of Defense of Ukraine also plans to purchase 2 new An-70 military transport aircraft, a corvette, up to 10 armored boats and develop a high-precision ship missile system.

The statement of the Minister of Defense can cause legitimate questions and concerns for many Ukrainians - as the reduction of personnel by 32% can significantly affect the country's defense capability. At the same time, the announced numbers of purchases and future plans for modernization leave quite a lot of doubts - will many, for example, change the 2 of new transport aircraft adopted before the 2017 of the year? In connection with the emergence of such issues, it is worthwhile to dwell in greater detail on the current state of the Armed Forces of Ukraine, and also to analyze whether the country's leadership has chosen the right path.

After the collapse of the USSR, Ukraine got huge reserves of weapons, the second after the Russian Federation. The numbers are truly impressive: up to 5500 tanks (T-64, T-72, T-55, T-80), more than 4000 infantry fighting vehicles and armored personnel carriers, a huge number of multiple launch rocket systems (MLRS) and artillery, including Smerch MLRS, in the amount of 95 units. Ukraine also inherited a huge and powerful air force - about 1100 combat aircraft, represented by the most modern bombers, fighters and transporters of the USSR at that time. Even the Tu-160 strategic bombers came into service with the Ukrainian Armed Forces, but later they were transferred to Russia at the expense of the debt for gas. Huge were the stockpiles of nuclear weapons and strategic carriers - 176 of intercontinental ballistic missiles (although by the year 1996 all nuclear weapons and their carriers were either transferred to the Russian Federation or destroyed, often with funds provided by the United States). The strongest were the air defense forces located in Ukraine.

As you can see, the groundwork of the Armed Forces of Ukraine was very serious. However, the resulting equipment was excessive for Ukraine. In the terrible economic situation of 90s and 2000s, due to the huge lack of funding, misuse of funds and rampant corruption, the resulting technology began to deteriorate very quickly. In addition, the sale of armament stocks began almost immediately - for example, by the most minimal estimates, it sold up to 500 combat aircraft and helicopters, to 1000 tanks and 1000 combat vehicles. As a result, for example, 208 (it was 1100) of combat aircraft and about 700 tanks (it was 5500) remained in the Ukrainian Armed Forces at the moment.

A huge problem is the expiry date of suitability of many weapons. This is especially true of air defense systems - in the last exercises, there were several spontaneous explosions of anti-aircraft missiles of the Buk complex, immediately after launch. At the same time, the replacement and modernization of certain types of equipment, such as the C-300 missiles, is not possible by the military-industrial complex of Ukraine, and their period is either already expired or will expire in 1-2 of the year. The problem is the obsolescence of technology, which, although a lot, but its effectiveness is noticeably lower than modern models. This whole situation is complicated by the fact that the huge army of both personnel and equipment accounts for only $ 2 billion of the defense budget (for the year of the 2012). At the same time, about 92% of this amount is spent only on the maintenance of the army, as a result pennies remain on development and modernization.

Another serious problem of the Armed Forces of Ukraine is the insufficient level of training of officers and personnel. For example, on 2010 year the annual raid of the pilot of the Air Force of Ukraine amounted to only 17 hours. Given that in the Russian Federation - this is 100-120 hours, and in the US up to 180 hours. True, there is some improvement in the situation, but the numbers in the 40 watches are also far from ideal. The level of recruits who do not receive real practice and serve only a year is very low. At the same time, the quality of contracted service personnel and the conditions of their service also remain critical - for example, the salary is only $ 200, and the issue of housing is at a very low level.

All of the above problems force us to conclude that the Ukrainian Armed Forces require radical reforms and changes. In this context, the proposal to reduce the staff of the Minister of Defense looks absolutely logical - it will free up some of the funds spent on the maintenance of the army and use them for development. In addition, it will be easier to train a smaller number of military personnel and officers. It is also necessary to seriously reduce the number of military equipment, especially at the expense of obsolete models, the preservation of which in combat condition eats up huge amounts of money, while there will be no return from such equipment in a real military conflict. In modern realities, Ukraine does not need aircraft with such a large amount of equipment - it is more important to create modern, highly mobile and high-precision troops that will be effective in case of local conflicts, since Ukraine is unlikely to participate in others. The amount freed from the reduction can be spent on a deep modernization of the most modern technology and the purchase and development of a new one. Modernization of some types of equipment together with the Russian Federation would be logical, for example, it would be vital to upgrade the C-300PS air defense systems, with expiring terms, to C-300М, which can even serve at least 20 years after. Or modernization of the Su-27, to the level of the Su-27СМ3 (this level of modernization is hardly achievable in the conditions of the military-industrial complex of Ukraine).

In general, the course taken by the Government of Ukraine reflects the realities; now it remains only to observe how these reforms will be implemented and whether they will be carried out in good faith. With an unfair approach, all this can only lead to a greater collapse of the Armed Forces, but at the same time the policy of reducing and modernizing the army is the only real way out of this difficult situation.

Ctrl Enter
Noticed oshЫbku Highlight text and press. Ctrl + Enter
We are
List of destroyed the largest and most high-tech enterprisesMilitary reform as an integral part of the security concept of the Russian Federation: Systematic dynamic assessment
Military Reviewin Yandex News
Military Reviewin Google News
197 comments
Information
Dear reader, to leave comments on the publication, you must to register.