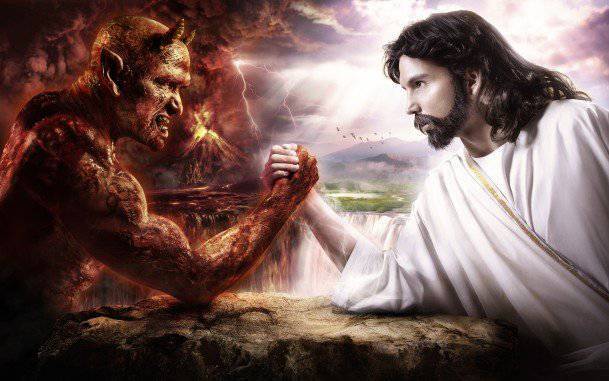 There are many temptations in the world.
People do not believe in God.
But which of them does not believe in the devil?
He is responsible for every disaster.
He remembers all of us
And everyone knows that firmly.

Atheists please do not worry. Anyone who believes in Darwin’s theory can consider himself a descendant of a monkey. Free will. For me, to believe that life originated purely by chance, evolved for a long time, and in the end; get it and sign it - a bipart without feathers, Man !, head or two ears - Homo Tsapus is the same as believing that after a lightning strike in a huge dump, which has everything to create anything, all the necessary elements) As a result of evolution, a spacecraft will appear, fueled with fuel and with an automatic space flight program. I hope no one will argue that a person is more primitive than any of the mechanisms.

However, the true believers of all faiths and religions, too, please do not worry. This article is not about God as a subject of faith. Faith is holy and I do not dare to encroach upon the holy. This article is not about God as a philosophical category. By and large, this is not about God at all, as most people used to perceive it. I am writing about the immediate creator of man. That is, about whose "image and likeness." About that, or rather, even about those who specifically engaged in the "development and pilot production" of man. About gods.

I personally have no doubt that man was created by gods for any one known purpose. Other options are unlikely because they lack practical meaning. For me, there is also no doubt that in a friendly team of creators, insurmountable disagreements arose regarding the properties, qualities and abilities of the new rational being, and his future fate. The result is known. The just cause triumphed. The opportunists were confounded, and not completely finished, slightly spoiled by the conflict, the product of the experiment was released on free bread.

The chief designer apparently had something to do besides grazing. Therefore, the opportunist who is known to us as the serpent-tempter, the devil, and the prince of this world, who almost ruined the whole affair with his arbitrariness, was sent to look after the child of the foolish.

So, I congratulate you! One of the former Gods, and now the Devil among us! And He is also not a philosophical category, but a very concrete, real being. We conclude this prolonged excursion to epic, to biblical times and turn to modern times.

It is the XXI-st century of the Christ's birth, and only God knows which one is in fact from the creation of the world. The world is flying to hell. Wars do not stop all historybut we are convinced that war is a catalyst for scientific and technological progress. Probably it is. But why do we need this very NTP? Somebody explain. What for?! Have we become more happy thanks to him?

We know more, we are civilized and cultural. Aha Schchzzzz! Of course, the great ancient thinker Aristotle thought all his life that a person has 100 teeth! This number probably liked him very much. To look into the mouth of the first slave who had come across and count his teeth, the great scientist had a bite. Not our method. A true scientist must come to the truth solely by the power of logic and mental inquiry.

But in ancient Egypt, pyramids were built, surgical operations of exceptional complexity were carried out, technologies were inaccessible to us even now, and .... did they have primitive writing? Figures and badges were written ... It means that the level of human development does not depend on the letter "letters". It is possible that just the opposite. Scientific and technological progress is the substitution, the replacement of human progress. Blende. We replace human abilities with technical devices.

We have a connection with the whole world, but we do not know the name of our neighbors. We have mobile phones with an unimaginable set of functions, and we do not remember the phone number of the parents - it is in the memory of the gadget. We can watch the Real - Barcelona final on TV, and we ourselves can’t hit not only the goal, but just the ball. We zasrat close space in order to look at the screen and do not see the starry sky! Do you understand? A wild nomad could see SPACE every night, and most of us NO!

We are dying out. I know I know. According to ... the decline has stopped ... the growth has begun ... Hurray! ... Fully. Everywhere, where NTP has reached certain values, where the standard of living has reached a certain value, where it lives comfortably, a person stops multiplying. Everywhere. Or is it not?

So, humanity throughout its history is moving towards progress. That is the setting. With a careful, not blinded look, it is clear that humanity is heading for its end. In any case, by the end of the model of the human formation that existed until now. But how? Why? After all, at the head of humanity the best. The best politicians, the best commanders, the best thinkers and scientists. Do they not see the obvious? See, know, understand.

But they do not make decisions. Goals, objectives and technologies of their execution they receive. Someone open, at seminars and gatherings such as the Bilderberg club. Someone in the secret and Masonic lodges. Someone directly to the brain, via telepathic or any other signals. But the fact that leadership is from the outside is beyond doubt. Since the money was invented, mankind has consistently acted on a specific program. Despite the deviations from this program, all the same, over time, we return to the previous course.

And this is no longer explained by the actions of the World Government. Mn the phenomenon is relatively young, and the course for profit, enrichment, comfort, debauchery, decay and extinction is as old as the world. Only now, thanks to NTP, the process is incredibly accelerated. World Trade, Worldwide Information Space has already been achieved. It remains to create a world state and the process of the collapse of humanity will be inevitable.

Top managers will remain - MP, clerks are lower managers. No, this is not the middle class, the middle class will be eliminated as unnecessary. These are slaves, but privileged slaves, they may be allowed to remain human. The rest - the installers and repairmen of automated production systems and sex workers will be deprived of all rights and most likely will not be fully human.

When the problem of the reproduction of humanity is completely solved, that is, the reproduction will be stopped, then the unsuccessful experiment will finally be completed and the prince of this world will be able, finally, to return to the previous position and start a new project.

But something will have to do at least Evil tries more than Good.
A forgotten song gives me warmth, as if everything was yesterday.
Maybe I didn’t quite forget the time when joy loved me.
Maybe just one look back will open my eyes to the future.

But! Not everything is so hopeless. No wonder a person is given a choice. This is indeed the gift of God. And the one who takes away this opportunity, no matter how, by force or deceit is the servant of Satan. We are deprived of the right to choose every day and everywhere. We impose a way of life and way of thinking. We are told from all screens (the demonic invention): do so and you will be happy! Buy and win! Do not miss your chance! Snickers! Sow! .. Ugh! Dirty trick! Sorry, inspired by music.

We hammered; no alternative! The servants of the devil inspire us: live for yourself, you are so tired, you have worked so hard, and rest. Look - a new restaurant, you have not been there yet, go ahead! Look what - 21 heels centimeter and kilo of silicone in each lip, so you have not tried it yet - come on! Enjoy, enjoy! Do not think - take it! Do not be afraid - try it! Hurry up, but you do not have time! Hurry up - not enough for everyone! Take care of yourself ... You deserve it!

Leaving would ... We are not allowed to stop; come on, come on, come on! New mobile phone! new tablet! New car! New house! STO-O-OOOOOOOP !!!!!!!
You just have to stop and look back. No wonder we are driven forward like a flock of sheep, ahead of the slaughter! No wonder our managers never go back to the point where it was possible the wrong decision was made, the wrong direction was chosen. Never! It was already, go ahead! No doubt, just go ahead!

It means that somewhere in our past there were such moments when it was possible to change this matrix, adjust the course, change the future, MAKE A CHOICE!

God gave us the opportunity to choose our fate repeatedly. You just have to look back. We had an alternative to the whole world structure. Yes, imperfect, and capitalism, wild, friendly or state-corporate raw material, perfect? We have demonstrated to the world that it is possible to choose that it is possible to live not for your own sake, but for the sake of society, to die not for the sake of money for your family, but for future generations, to endure need not for the sake of personal wealth in the future, but for the prospect of wealth for all. But we refused, we were bought on a beautiful picture. We were stupid and naive. Forgive us, Lord. Give us another chance. Back to the Future!

The article uses fragments of lyrics of the group "Resurrection"

Ctrl Enter
Noticed oshЫbku Highlight text and press. Ctrl + Enter
We are
A great interview with Sergey Lavrov: about Ukraine, Obama and IranWhat you didn't want to know about England
Military Reviewin Yandex News
Military Reviewin Google News
Add a comment
Information
Dear reader, to leave comments on the publication, you must sign in.