Russian victories in the Caucasus: the seizure of the Bayazet pashalyk and the defense of Akhaltsikha in 1829

July 1 2013
7
The campaign in 1828 in Transcaucasia was successful for the Russian army. After taking Akhalkalaki and Akhaltsykh (Russian victories in the Caucasus: the capture of Akhalkalaki and the Akhaltsikhe battle in 1828), Russian troops 17 of August without a battle occupied the fortress Atshur (Atskuri). Atshur fortress was located at the southern entrance to the Borzhomi gorge. The fortress captured 14 guns and 300 pounds of gunpowder. Then the Russian troops occupied Ardagan, which stood at an important crossroads of mountain roads. It was captured 31 gun.

The success of Paskevich’s corps predetermined victories in other areas. On the left flank of the corps deployed against the Ottoman Empire, in the east of the Armenian region, a detachment operated under the command of Prince A. Chavchavadze (1786 — 1846). Alexander Garsevanovich was the head of the Armenian region formed from the Erivan and Nakhichevan khanates.

Chavchavadze came from a noble family, his father, Prince Garsevan Revazovich Chavchavadze, Ambassador of the Kings Heraclius II and George XII in Russia, signed the Russian Empire in 1783 from Georgia (Kartli-Kakheti kingdom). Alexander Garsevanovich was brought up in the Passion building, then at home, under the supervision of his father, one of the most educated people of that time. In his youth, Alexander succumbed to the influence of supporters of the independence of the Georgian kingdom, fled from his parental home and, together with some other Georgian noblemen, joined Prince Parnoz, son of King Heraclius II, who raised the banner of the uprising. The uprising was quickly put down, Chavchavadze, at the request of Tsitsianov, was sent to Tambov for three years. However, the link was short, the young prince was sent to the Page Corps, in 1809, he was released from him as a lieutenant in the Hussar Life Guards Regiment. From 1811, he was an adjutant of the Caucasian commander in chief, Marquis Paulucci, with whom he carried out diplomatic and military assignments. During one of them was wounded. He took part in the Patriotic War 1812 of the year, the foreign campaigns of the Russian army, was, as an adjutant of Barclay de Tolly, during the capture of Paris.

In 1817, he returned to Transcaucasia. Already in the rank of colonel, transferred from the Leib Hussars to the Nizhny Novgorod Dragoon Regiment, which was stationed in Kakheti. From 1812, he became the commander of the Nizhny Novgorod regiment, then he moved to the Georgian Grenadier Regiment, and in 1823 in the year he made a military service, he served for special assignments under A. P. Yermolov. It should be noted that the managerial and military talents of the prince combined with his poetic gift - Chavchavadze was a talented poet. After the conquest of Paskevich of the Erivan khanate, he was promoted to major general, became the regional chief and commander of the troops in the Erivan region. 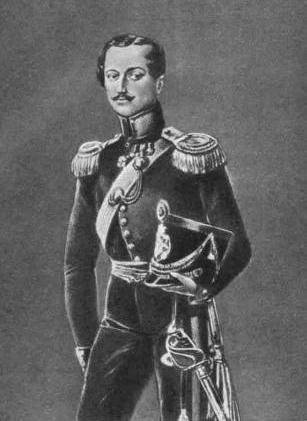 When war broke out with Turkey, Alexander Chavchavadze commanded 2-thousand detachment: from 2-battalions Nasheburgskogo Infantry Regiment, 3-x mouth Sevastopol (1400 people regular infantry), 200 Cossacks of the Don Belova regiment, 400 Muslims and Armenians Erivan equestrian militia and 6 guns. The detachment was to conduct offensive operations against the Bayazet pashalyk, which borders on the Armenian region. The Turkish region was predominantly populated by Armenians, which favored the Russian offensive.

The local Balul Pasha was indecisive, which Chavchavadze took advantage of. On August 25, a Russian detachment invaded Turkey and August 27 suddenly found itself in front of the walls of Bayazet. The fortress after a little resistance capitulated. In three weeks, Russian troops took the fortress of Bayazet and occupied the main cities of the three Bayazetan sanjaks: Toprak-Kale, Khamur and Diyadin. Sanjak in Turkey called the administrative unit, the average between the vilayet (pashalyk) and Kadylyk (county). On September 22, Chavchavadze informed Paskevich about the full occupation of the Bayazet pashalyk by Russian troops. “Well done Chavchavadze!” Exclaimed the Caucasian governor. Paskevich petitioned for awarding the brave Major-General Chavchavadze with the Order of Saint. Anna 1-th century., And that was done.

Chavchavadze tried to develop success, although he had a very small detachment. Russian troops advanced further along the Alashkert Valley. On the left bank of the Euphrates, 90 versts from Erzerum, Russian banners began to fly. Erzerum ruler tried to oust the Russians from the fortress Toprak-Kale, but could not. Paskevich by this time reduced the number of Russian troops in Northern Persia, the shah's government reduced its debt to Russia. The liberated troops were sent to the Bayazet pashalyk.

In general, the 1828 campaign of the year was successful for the Separate Caucasian Corps: six fortresses were captured, including such powerful ones as Kars and Akhaltsykh, three locks, about 8 thousand enemy soldiers captured, more than 300 guns and 195 banners captured. The corps itself in this campaign lost 3200 people killed, wounded and dead from diseases. The onset of winter, which was very harsh in the mountains, ended the campaign. In the conquered territories in the fortresses they left in the garrisons - 15 infantry battalions, 4 Cossack regiments and three companies of artillery. The rest of the troops retreated to their territory. In Russia, the public enthusiastically perceived the success of the Separate Caucasus Corps. The warriors of the Caucasian corps were compared with the wonder-heroes of Alexander Suvorov. Paskevich became the hero of the war 1828-1829. 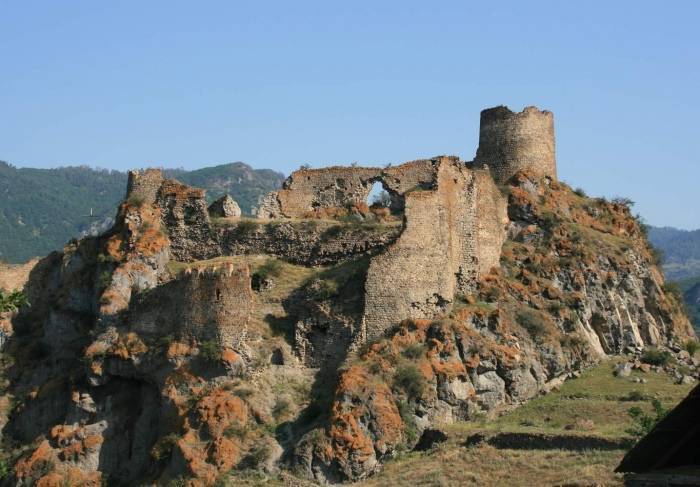 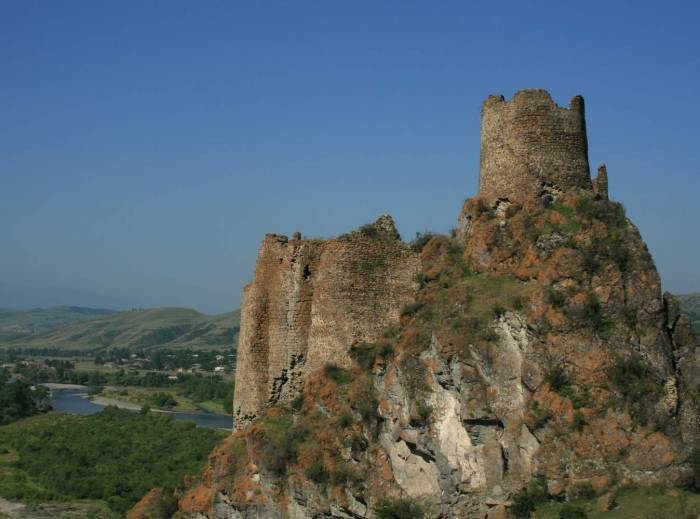 The successes of the Russian army in the South Caucasus caused fear in Istanbul and irritation of the Sultan. Erzerumsky Ghalib Pasha and Commander-in-Chief Kios-Magomed Pasha lost their posts and were exiled to remote areas of the empire. The title of seraskir (commander-in-chief) was given to Haji-Saleh Meydansky, who was given unlimited powers. The direct leadership of the troops was entrusted to Gakki-pasha and Sivaz. They were given large powers and funds, instructing them to repel the pashalyks captured by the Russians. In the near and far border areas, total mobilization began to be carried out, planning to put 200 under the gun to the spring with thousands of people with 136 guns. For the fortress of Akhaltsyh, the sultan promised Ahmad Bek to Adjara, the largest feudal lord in Akhaltsykh pashalyk, the title of three-tailed pasha, the title of ruler of this area and a large monetary reward. Seraskir of Anatolia and Armenia planned not only to recapture the lost lands, but also to transfer military operations to the Russian Transcaucasus — Guria, Kartli, Mingrelia, Imeretia. Georgia had to undergo a devastating invasion.

The Russian command also did not sit idly. 20 thousand recruits were appointed to replenish the Separate Caucasus Corps. But recruits could arrive in the Caucasus only in the spring of 1829, and they still needed to be equipped and trained. Therefore, to start the campaign 1829, had already with the available forces. Paskevich planned to advance on the Erzurum direction, and after taking Erzerum, to go further - on Sivas. This Asian possessions of Turkey cut in half. Baghdad was separated from the Turkish capital.

To replenish the troops, the Russian command led negotiations with Kurdish elders. The Kurds were a significant part of the Ottoman irregular cavalry. Some Kurdish rulers eagerly accepted the offer to serve Russia. He accepted the offer of musha pasha. He asked to keep the post of the pasha - Governor-General Mush and monetary reward. Captain Vochnadze went to him with a secret assignment. The Ottoman dignitary expressed his willingness to recruit 12 for Russia thousand riders, subject to the monthly payment of 10 thousand chervonets. Such an agreement strengthened the Russian position on the left wing. At the same time, by order of the governor in Transcaucasia, four 5-hundreds of Muslim cavalry regiments, two Armenian semi-battalions in Erivan and Nakhichevan, and one battalion from Bayazian Armenians, are formed from hunters (volunteers) to strengthen the current corps. At the same time, an attempt to create 5-thousand failed. Georgian "Zemstvo Militia", as an addition to the temporary police. There was a rumor among the population of Eastern Georgia that the Russian authorities were introducing recruitment duty and taking people into soldiers for 25 years. This caused grumbling among ordinary people. The peasants were ready to repel the Ottoman invasion without exception, but they wanted guarantees that people would return home after the end of the war. From the idea of ​​"Zemstvo militia" decided to give up so as not to cause confusion in the rear. Only the voluntary militia remained - the horse and foot, which the aristocrats recruited from the nobles and their people.

While preparations were under way for a new campaign, alarming news came from Persia. A Russian mission led by Alexander Griboedov was killed in Tehran. Behind this sabotage was the Persian "party of war" and England. The smell of a new war with the Persian state. However, the Shah remembered the recent crushing defeat in the war with Russia 1826-1828. and did not dare to go on a new armed conflict with St. Petersburg. The matter was settled by peace.

In the spring of 1829, Count Erivansky was able to allocate from the almost 50-thousand to the current squad. Separate Caucasian corps about 17-18 thousand people (19 infantry battalions and 8 cavalry and Cossack regiments) with 70 guns. The rest of the troops were supposed to carry out garrison service on the Caucasian line, to defend Georgia, the Black Sea coast, and the border with Persia.

The first to attack the Turkish troops. Ahmad Bey hastened to execute the order of the Sultan and 20 in February 20-th. Ottoman army (5 thousand regular infantry and 15 thousand militia) at 6 field guns mountain passes left Akhaltsikhu. The Russian garrison of the fortress numbered only 1164 people with 3 serf guns and 6 field guns. The garrison was commanded by Major General Vasily Osipovich Bebutov (1791 — 1858).

Prince Vasily Bebutov belonged to an ancient Armenian aristocratic family, who moved to Georgia and held important positions here as hereditary meliks of Tiflis and Jägermeister of the Georgian kings. Vasily Osipovich studied in the 1 Cadet Corps, in 1809 he was enrolled as an ensign in the Kherson Grenadier Regiment stationed in Georgia. During the Turkish campaign 1806-1812, as adjutant to General Tormasov, took part in a number of battles with the Turks and fights with the mountaineers. He fought during the Patriotic War 1812, the north direction. In 1816, Bebutov returned to Transcaucasia again and was appointed adjutant to A.P. Yermolov. Under Yermolov, he participated in two Dagestan expeditions during the conquest of the Kazi-Kumykh Khanate. In 1821, Bebutov was appointed commander of the Mingrelian Chasseurs Regiment, in 1825, the 2 Brigade of the 22 Infantry Division and commanded Imeretia. In the campaign, 1828 of the year distinguished himself in the Akhaltsy battle and the assault of Akhyltsykh. For this assault marked golden with a sword of a sword. Bebutov was appointed head of the Akhaltsikh pashalyk. 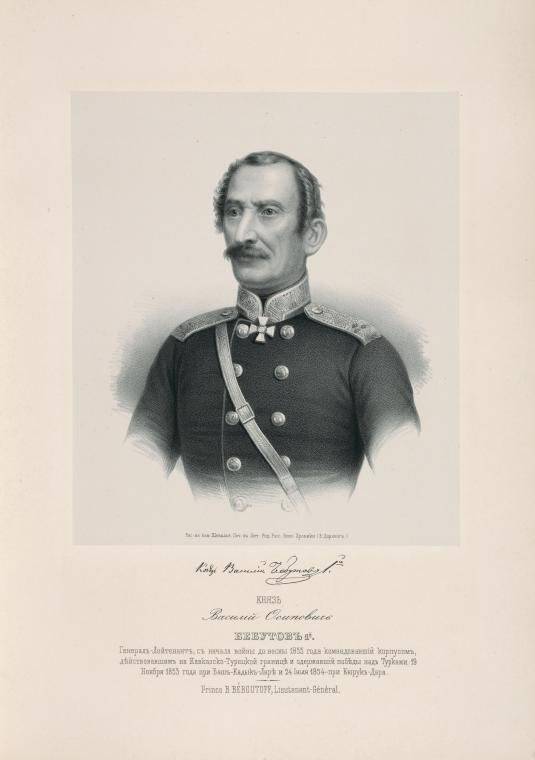 Thanks to the energy of Bebutov and the courage of the troops, the night storming of the fortress was reflected. The Ottomans, irritated by the failure, punched the Christian population of the outskirts, which was favorable to the Russians. The position of the Akhaltsykh fortress, despite its first success, was difficult. The Turkish command organized a siege, which lasted until March 4. The Turks fired on the fortress and tried to deprive it of water. In addition, Ahmed Bek covered himself from the Borzhomi gorge 3-thousand. detachment. The Turks were able to intercept messengers in Tiflis, and the Russian command did not immediately learn about the siege.

The Russian garrison rejected all the proposals of the Ottomans for surrender. On March 4, when a detachment of Colonel Burtsev approached the defenders of the fortress of Akhaltsykh, who crossed Kura, was able to bypass the Turkish barriers, the garrison made a sudden sortie. The siege was lifted, the enemy fled. Pursuing a fled enemy, Bebutov managed to repel two guns and two flags.

Almost at the same time the attack of the trampling pasha failed. Trapezunt Pasha with 8-th. the detachment moved into Guria, but was defeated at the Limani stow, near the Nikolaev fortress by a detachment of Major General Hesse. Ottomans placed great hopes on Guria. Guriansky Prince Machutadze, who had gone over to Turkey, promised to raise local residents against the Russians.