Ecuador was blown away - now everything depends on Putin 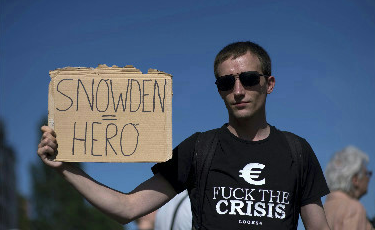 It looks like the situation with Snowden takes a completely unexpected turn. The current actors seem to be beginning to slowly work back. At the same time, the Western press begins a movement controversial with respect to politicians. The world seems to be changing almost day by day. All this is possible only in the case when all reference points are lost and absolutely all are confused.


Now it's time for those who are used to catching fish in muddy water. American intelligence agencies are great specialists in this particular area. Crumpled was the order begin to recover and act on a long-established scheme. And yet there are those who go to perekor known expression that "You should not kill the messenger." Instead of ganging up on those who usurped the right of US citizens guaranteed by the constitution, lawmakers prefer to attack Snowden, but do not react to the violation of the constitution. In this situation, the uncompromising Russia remains a lonely rock because of the retreating allies. For the umpteenth time, Putin’s time has come. Now it is realized even in the West.

It became known that the government of Ecuador was subjected to severe economic blackmail. So it was declared that Ecuadorian exports to the US would fall under protective sanctions in case of the granting of asylum to Snowden, and this immediately cooled the eagerness of Ecuadorians. Being a tough nut or pretending that you are such is not the same as it turns out in our current case. Ecuador’s President Rafael Correa was in Washington a month ago on the issue of extending preferential terms for exported goods. It is perfectly understandable that now all this can crash with a crash and the affairs of the newly elected Rafael Correa in their homeland will not be so brilliant.

It is with these prospects that a certain indecision is caused which the Ecuadorian embassy began to show. So it was stated that the decision to grant asylum to Edward Snowden could be delayed for up to two months and in this case, the point of view on this problem of the Americans will be taken into account. It must be said that this statement is very revolutionary. It radically changes everything. With this approach, a refuge Snowden can put a cross. This is what caused история in a sense, dragged on. The government of Ecuador is frankly scared and probably Snowden should not rely on him.

The reader is probably interested in the question, why can Assandzha be sheltered in his embassy, ​​but not Snowden? It should be noted that Assandzh and Snowden is still not the same thing. First, Ecuador shelters Assange not from the United States, but from Great Britain, and this is a big difference. Yes, the United States wants to get Assandzha, but perhaps this is only after his return to Britain and extradition by court order to the United States. This is a two-way process for which there is no need to waste energy and inflate media interest in this issue.

Other participants in this story also behave very suspiciously. Has anyone heard of any Chinese statement on this topic? China decided to just keep silent in this story, and perhaps this is the wisest decision. No one will drag the Chinese behind the beard because of what has been said. In this sense, the Chinese are very sophisticated politicians and diplomats.

Putin behaves quite differently. Of course, he, too, is very skillfully maneuvering and does not set up the sides of the enemy, but everything else feels different. Even those who usually tear it into print today are more and more admired by his perseverance and determination. The article “Putin’s New Perception” by well-known author Gerald Warner directly states: “I never thought that I would live to say this, but I consider myself more agreeing with Vladimir Putin than with any of the Western leaders ... We need Putin .. These are the feelings that are beginning to appear more and more often on the English-language Internet. ”

Nevertheless, in the West there is an opinion that it is good to support Putin “without experiencing all the charms of his authoritarian style of government” and “Western democracy bothers while it is.” As soon as “Putin's fans” get into real Russian habitat, then there is a high probability that they will very soon complain about what seems to be not so pretty today. The author of this article has lived fairly still in the USSR, and nowadays often in Russia and the republics, with knowledge of the realities, states that it is probably not necessary to put people in such conditions, because the choice of citizens may turn out to be completely unexpected. Not the fact that after trying Russian freedom, the majority will again want to return to the American one. Anyway, today, as a person living in New York, I can say that Russian immigration to the United States has stopped. Now more and more people are going to the USA from the republics of Central Asia.

Further, Mr. Warner treated the heads of the eight simply in a destructive way: “The fact that Putin is rapidly gaining points is to blame for the weakness of EU statesmen. During the next photographing, the PR managers asked the 8 managers to take off their ties, as soon as this happened, one of the journalists immediately joked that they all looked like dads dancing in a school disco. Of course, Putin was not included in this cohort. It is very difficult to disagree with the sharp tongues of journalists. EU leaders increasingly resemble "Kremlin elders". Look, for example, at the fallen Barroso or Füle whose cheeks are already visible from the back of the head, and at the same time Putin looks like a fit and very strong man who needs to be controversial. Gerald Warner says that Putin’s position might have seemed a poseur if not for one circumstance. As soon as the conversation reached Syria, Putin demonstrated a tough stance and did not yield a single millimeter. The G8 leaders had to agree with the Russian edition.

All this suggests that, in the Snowden case, a very dramatic change in the position of Russia is awaiting us. Of course, Putin would like to have his position supported by as many countries as possible, but if this does not happen, Putin can also keep the situation under control. If this seems impossible to someone, then remember the Munich speech, which also made an impression of a bomb exploded. However, no one will deny that all that was said there has a real bloody incarnation in life today. Putin talked about the inferiority of the unipolar world, and as we know today, this is no longer a discovery and news. Bloody everyday life immediately in dozens of countries, this is a consequence of a unipolar world.

The future, according to Mr. Warner, does not look optimistic for the West. “The contrast between the West and Russia is on the one hand: liberalism, cultural masochism, depopulation of the indigenous population, aversion to the family and hedonism, and on the other hand: personal responsibility in the confrontation, nurturing the courage of the nation, strong political will and ruthless defending of national interests.

Perhaps in many respects, Mr. Warner is right, but we are completely clear that having said all this, he just pinched grass on the lawn and in no way got to the core values ​​of what the Russians have always been: truth, justice, collectivism, human compassion, conscientiousness. It is not in the West, but it has always been in Russia. This is where Russia lives today, and as soon as the word “truth” sounds, there will always be people in Russia who are ready to defend it. Russian soldiers do not need to be kept in an information vacuum before a combat operation, as is done in the United States. The American soldier should not know the truth - without his life, a Russian cannot think.

This is the truth today and climbs from all cracks. No matter how the American authorities try to hide it, this is tantamount to manually setting the sun. That is why with such a frenzy today, lawmakers and politicians in the United States do not want it to go out. However, a lie can not be demolished heads. In this episode, Putin is quite predictable. The fact that Snowden will not be given to the United States is clear as day. The question is different. Will Putin leave Snowden if he applies for refugee status, 9: 4, yes. In order to avoid huge image losses, the United States should rather forget this story. Judge for yourself who would now remember Assange along with his Wikileaks, if not for Snowden today. America needs to get rid of this scandal from the hands as soon as possible, because America will not endure another Snowden, but Russia will certainly shelter him.

Ctrl Enter
Noticed oshЫbku Highlight text and press. Ctrl + Enter
We are
A great interview with Sergey Lavrov: about Ukraine, Obama and IranWhat you didn't want to know about England
Military Reviewin Yandex News
Military Reviewin Google News
82 comments
Information
Dear reader, to leave comments on the publication, you must to register.