Are there any prospects for Ukrainian air defense systems? 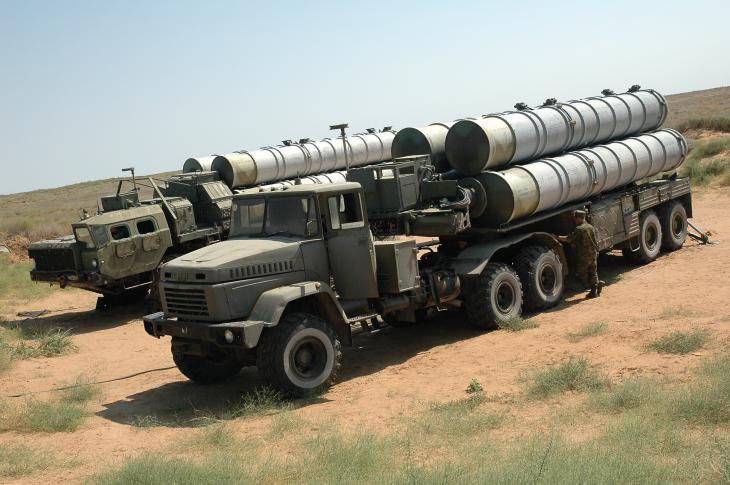 In one of the spring issues of the Ukrainian specialized publication Defense Express, an article appeared titled “Shield Repair”. Its author - Vladimir Tkach - gives examples of sample anti-aircraft missile systems, which are in service with the Ukrainian Army, and also gives certain characteristics of their condition and prospects. In particular, the article deals with the fact that Ukraine’s army has about 60 divisions of anti-aircraft missiles, however this year the age of the youngest kit will be two decades, while the oldest will be almost forty years old.

At the same time, it should be noted that each of these complexes has a warranty period of operation. So, for C-300, it is defined in 25 years (most of the complexes were produced in late-80 - early 90-s). Spare parts for them have long been discontinued, and it is also no longer possible to remove the missing parts from samples stored.

Repair of C-300 complexes, which began as early as 2004, is carried out by Ukroboronservis. Here the Center of military equipment and weapons was specially created. And according to the results of the joint work of the Ukrainian and Russian commissions, it was decided that the technological, technical and documentary bases of the enterprise are quite suitable for carrying out repair work on the components of the C-300 complex and increasing their operational life. In addition, this company has all the necessary documentary base for the repair work of Buk-M1 anti-aircraft missile systems. In addition, at the plant in the autumn of 2012, the acceptance tests of the C-300PT complex passed. According to those who were present at the testimony of military officials, the repair work was carried out at a fairly high professional level and, not least, completed on time. According to their statements, after repair, these complexes meet all the requirements of the present time. Thus, as of the year 2013, the X-NUMX divisions of the C-8PS complex have already been repaired, the life of which has been extended by five thousand hours or five years.

The timeliness and the need for repair work is obvious, because almost all the complexes that are in service with the Ukrainian army have exhausted their operational resources identified by the manufacturer.

Currently, the air forces of the Ukrainian army are armed with such systems and systems as “Buk-М1”, СРК С-200В, ЗРК С-300ПС, ЗРС-300В1. Earlier in service were also C-125 complexes, however they were removed a few years ago. The most modern of them is considered to be C-200 and C-300 complexes. All modifications of the C-300 complex, which are in the troops, according to the technical documentation, can hit aerial targets that fly at a height of about 75 kilometers. C-200 complexes have a range of about 150-240 kilometers. C-300 designed for the defense of industrial and administrative facilities, headquarters, stationary command posts and military bases from tactical and strategic air strikes, as well as ballistic and cruise missiles. C-200 is designed to conduct the defense of the most important industrial, administrative and military facilities against all possible types of air attack weapons. At the moment, these complexes are quite suitable for ensuring the destruction of promising and modern aircraft and unmanned and manned aircraft. But the problem is that the repair work of these complexes should be carried out every ten years, and the Ukrainian armed forces due to the constant lack of funding of this luxury can not afford. From here and so sad results: of all the complexes that are currently on duty, only about 40 percent are fully combat-ready.

In addition, there is another nuance: after a tragedy occurred several years ago during one of the military exercises in the Crimea, during which Ukrainian anti-air forces shot down a Russian Tu-154 plane over the Black Sea’s waters, 200 and C-300 were banned on Ukrainian territory. In turn, this led to another serious problem: every year the number of servicemen who actually fired from these complexes decreases at a catastrophic rate.

In 2003, the ban on the use of Ukrainian landfills was lifted, but still not allowed to shoot C-200 (and these complexes have the greatest range). Of course, Ukraine has certain agreements with Russia on the possibility of using Russian military test sites for firing, but in this way it is simply impossible to prepare all anti-aircraft forces. Thus, it is possible to say that the C-200 complexes have only conditional combat readiness, and in case of anything, it is necessary to hope only on C-300.

From this it follows that the repair of C-300 complexes for the Ukrainian military is a very serious and urgent issue. It should be borne in mind that Russia, which is a manufacturer of this complex, considers it obsolete. Therefore, in the near future, it intends to remove C-300 from production and to deal with the release of C-400 only. The last C-300 was released, we recall, back in 1994 for export, but at present there are no export orders. Ukraine also does not have the opportunity to engage in independent repair of complexes, since it does not have the appropriate components.

Thus, a situation may soon arise when all the plans of the Ukrainian army to return to the system of anti-aircraft missiles will end. Trying to solve the problems that had arisen, several years ago, the General Staff of Ukraine started talking about returning the Pechora C-125 complex, which had been adopted by the Soviet forces back in the 1961 year. But the question arises: where to get them, if almost immediately after they were removed from service, most were sold abroad? ..

At the same time, the military department says that the C-125 complexes remained approximately in the 20 divisions, and by the year 2015, the order of the 9-10 modernized complexes can be restored. During the modernization, the Ukrainian defense enterprises developed a modernized UNK-2D control cabin, installed a modern receiving and transmitting device and a launcher, and replaced control systems installed back in Soviet times. Thus, the UNK-125D command post, the 2P2-5D launchers, the UNV-73D antenna post and the technical support equipment are part of the upgraded C-2-2-DMS complex. Interference immunity was increased, target detection range increased by 20 percent. The only thing that the upgrade has not touched is the 5B27 and 5B25 SAMs. In addition, as part of the modernization, the level of reliability, survivability, mobility of the complex, the stability of the radar station to interference were increased, and the resource of the complex increased by 15 years.

As a result, tests of the modernized complex were carried out at the “Chauda” test site, which, according to the developers, were very successful. In various modes, six missile launches were made. It was found that the detection range of air targets at an altitude of about 7 kilometers, is 100 kilometers. I wonder if the C-125-2D complexes will get into service with the Ukrainian troops, more precisely, whether the state has enough money to buy these samples.

It should also be noted that at the end of spring 2012, the “Program for restoring the combat capability of anti-aircraft forces of the Air Forces of Ukraine to 2017 of the year” was approved, according to which it is planned to carry out repair work on four C-300PS anti-aircraft missile systems and one Buk-M1 complex . The implementation of the program is entrusted to the enterprise "Ukroboronservis."

It is assumed that C-300PT, C-200B and C-300В1 complexes will be decommissioned, and the total number of divisions will be reduced to 40, of which one-third will be Buk-M1 complexes, and two-thirds will be C-300 SAMs. However, it is necessary to understand that to infinity, it is impossible to modernize any model of military equipment and armaments, especially if we are talking about weapons that were created more than half a century ago. Therefore, the military should think about the purchase of new weapons and, therefore, look for funds for this. Ukraine at the moment there are two of the most realistic options to upgrade their missile systems - either to start production of their own, or to buy them abroad. Earlier, many said that the Ukrainians intend to create a domestic multifunctional missile system Sapsan, but this project was closed despite recent statements by the military department that it is planned to allocate more than 2020 billion hryvnia to 6,5 year. Therefore, a more realistic prospect for Ukraine remains the purchase of anti-aircraft missile systems in Russia. Earlier, we recall, the Russians have already voiced the conditions on which they agree to supply Ukrainians with the C-300 PMU-2 Favorit complexes. However, since C-300 was discontinued, it would be much more appropriate to talk about the Triumph C-400 procurement, but only if the two governments could find an acceptable political format for solving their problems. However, given the current uncertainty of the Ukrainian foreign policy, it is difficult to imagine such a level of mutual understanding, therefore, unfortunately, the Ukrainian military-political leadership can only strive to find this very mutual understanding ...