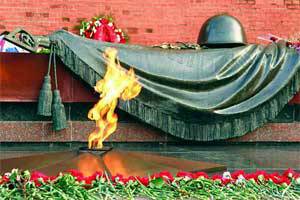 On the eve of the Day of Memory and Grief Levada Center conducted a nationwide survey. According to its results, more than half of the respondents (52%) are sure that the main merit in victory in the Great Patriotic War belongs to the Soviet people, 6% of respondents assign this role to Joseph Stalin, 5% to the Communist Party and the USSR leadership in general. Every third (33%) believes that victory in the Patriotic War was ensured all together. Meanwhile, if now, as in 1941, the war began, half of the respondents declared their readiness to defend the Motherland: 29% of respondents would go to the front by conscription, 20% volunteer. Every tenth (9%) would try to go to a safe country, another 19% doubt that they would be called up. Difficult to answer 23% of respondents. Answering the question who, in their opinion, is the main responsibility for our multimillion-dollar losses in this war, 21% of respondents pointed to Stalin, 13% - to the Communist Party and the country's leadership (last year there were 30 and 20%, respectively). 37% of Russians now against 28% a year ago believe that the responsibility lies only in Germany, 13% - "all together."


Large losses and losses in the first months of the war are attributed by some respondents to the suddenness of an enemy attack (37%), others to the lack of readiness for an invasion (33%). In addition, respondents believe that the command of the Red Army was drained of blood by the Stalinist purges of the late 30 (30%), the army itself was much worse trained and armed than the German troops (25%), the USSR did not have time to transfer the economy to military rails and not prepared for war (25%). It is worth noting that the number of positive assessments of the Red Army over the year has become noticeably higher, and the number of those who are ready to fight for their homeland has increased by more than 10%. The attitude of Russians towards the USSR and the Soviet stories.

Ctrl Enter
Noticed oshЫbku Highlight text and press. Ctrl + Enter
We are
Report on the results of the survey-2013 "Evaluation of state political figures"
Military Reviewin Yandex News
Military Reviewin Google News
191 comment
Information
Dear reader, to leave comments on the publication, you must to register.