Eurasian political science. What will the US do with Kyrgyzstan for exile from the Manas airbase 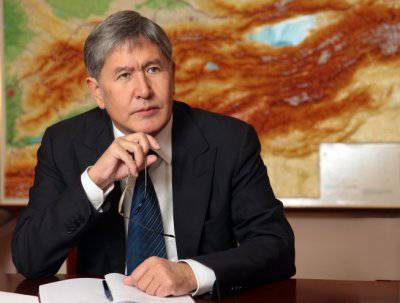 Kyrgyz President Almazbek Atambayev signed a law on the denunciation of the lease agreement for the US Manas airbase. Less than a week ago, a similar decision was made by the national parliament, the Zhogorku Kenesh.


It is noteworthy that on the day when the Kyrgyz parliament made a decision on denunciation, a whole Donald Rumsfeld flew to Bishkek, who conducted private consultations outside the city.

So, the formal procedures for expulsion are executed - the United States must obey the decision and leave the Manas air base. This is if you think in the framework of the legal field. But I doubt that the Americans will silently agree to leave such an attractive aircraft. Especially on the eve of the withdrawal of troops from Afghanistan, which is scheduled for 2014 year.

Consequently, further US actions in the region will be non-legal in nature. There is only one strategy for potential base preservation - instability in the republic, against the background of which the presence / absence of US troops no longer matters. Obviously, in the case of the implementation of a non-legal scenario, the Kyrgyz authorities alone will simply not cope with the situation. And then it will be a matter not only for Kyrgyzstan, but also for the allies.

In fact, there are not so many scenarios for the unlawful preservation of the air base.

Considering that Kyrgyzstan is a sovereign state that is not bound by any military-political obligations except membership in the CSTO (which today is not a military-political union in the full sense of the word), the United States may simply not implement the decision on denunciation.

According to a similar scheme, the States retain Guantanamo in Cuba, despite the fact that the Cuban side refuses to accept rent and has repeatedly made attempts to denounce the agreement from 1934.

The scenario itself is unlikely and most likely will be implemented simultaneously with other, more stringent.

Socio-political conflict along the North-South line

The internal threat of Kyrgyzstan lies in the weak integration between the regions. In fact, the South is cut off from the North, where the capital is located. Over the 20 years of national development, the contrast in socio-economic development between regions increased, and the distant elites of the South view territories as their own fiefdoms.

Additionally, the situation is aggravated by the fact that Kyrgyzstan is a parliamentary republic with a penchant for generic politics. Accordingly, the central government, whether it wants it or not, is forced to balance between the interests of elite groups.

Also, we must not forget that it is in the South that the resource, electoral and organizational base of exiled President Bakiyev, who lives hostage in Minsk, is located. And if the factor of Bakiyev himself is not to be overestimated, then the elites of the South, who were removed from power after his expulsion, are directly interested in a rematch.

Provocative political conflict along the North-South axis is the most promising scenario for the United States and unpleasant for Kyrgyzstan.

As we could see less than a month ago using the example of Kumtor, the socio-economic situation in the republic is such that provoking a riot is not that difficult. And in the situation of a regional-geographical split of elites, even that is easier.

The second risk zone is ethnic enclaves in the territory of Kyrgyzstan, Tajik and Uzbeks. The enclaves are the jurisdiction of Tajikistan and Uzbekistan, but they are accessed through the territory of Kyrgyzstan. Given, to put it mildly, the unfriendly policy of Tashkent towards Bishkek, the explosiveness of the enclaves should not be underestimated. In addition, at the beginning of this year, we observed an exacerbation just around the Sox enclave. Given that Tajikistan has an open border with Afghanistan, the Tajik enclaves in Kyrgyzstan should be considered as potential sources of chaos exports.

In general, the scenario of preserving Manas for the United States will be built within the strategy of withdrawing troops from Afghanistan. Now we can assume that the ultimate goal of the withdrawal of US troops and allies is the resumption of the civil war in Afghanistan.

It is clear that no Karzai will hold any power, at least throughout the territory. Accordingly, in the Afghan history will begin to draw all the neighboring states. Tajikistan and Uzbekistan, which directly border Afghanistan, are in the area of ​​primary risk. In the context of the implementation of the “Greater Afghanistan” project, where Tashkent and Dushanbe, Kyrgyzstan, and especially its severed South, are supposed to enter the zone of direct risk.

With all the need to denounce the agreement on the lease of the Manas airbase, this decision made it necessary for the United States to fight for the preservation of the springboard by illegal means. What we saw in the Sokh enclave at the beginning of the year, at the Kumtor mine and on the closed Osh-Bishkek road, should be viewed as a rehearsal for destabilizing Kyrgyzstan.

Too many regional players, both inside and outside the republic, are interested in destabilization. For the deployment of full-scale actions there was not enough interest of the main actor, which appeared after the denunciation of the agreement on "Manas".

Ctrl Enter
Noticed oshЫbku Highlight text and press. Ctrl + Enter
We are
A great interview with Sergey Lavrov: about Ukraine, Obama and IranWhat you didn't want to know about England
Military Reviewin Yandex News
Military Reviewin Google News
89 comments
Information
Dear reader, to leave comments on the publication, you must to register.