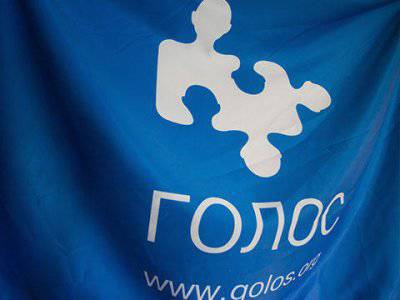 The Moscow Department of Justice decided to suspend the activities of the association of non-profit organizations "In defense of voters' rights" Golos "for half a year. This NPO, previously found to receive funds from abroad, did not register as a foreign agent, which is a violation of current legislation, in the ministry.


“According to the Federal Law“ On Non-Profit Organizations ”, in the event of suspension of the activities of a non-profit organization acting as a foreign agent, its rights as a founder of the media are suspended, it is prohibited to conduct mass actions and public events,” a statement published on the agency’s website says.

The Ministry of Justice emphasizes that organizations are also prohibited from using bank deposits, with the exception of settlements for economic activities and labor contracts, compensation of losses, payment of taxes, fees and fines.

“These are the predicted actions of the Ministry of Justice. This in no way imposes restrictions on the creation of a new organization by us. In particular, we are creating a non-registered public association that will organize and monitor the elections,” the association’s deputy director, Grigory Melkonyants, noted that Association "Voice" previously independently launched the liquidation procedure. Melkonyants added that the Ministry of Justice is biased only about Golos.

In early April, the Ministry of Justice called the NGO Golos the first foreign agent. According to the ministry, the organization receives funding from foreign sources, but for the four months that have passed since the entry into force of the law, it did not register with the register of non-profit organizations (NPOs) that "perform the functions of a foreign agent."

Mass checks of Russian NGOs began on March 21. They were subjected to more than 90 organizations, including Agora, Amnesty International, Memorial, Public Verdict, Civic Assistance, Moscow offices of Human Rights Watch and Transparency International. In total, as reported by the Ministry of Justice, "2013 thousand inspections of NGOs are scheduled for 7,37."

The law on NGOs, which caused a wide response in society, came into force at the end of November last year. According to the opposition, the authorities can use it to exert pressure on political opponents. The essence of the bill is that NGOs receiving funds from abroad are required to register as "foreign agents." They will be entered in a special register, in addition, NPOs will be required to report on their activities and even on the “personal composition of the governing bodies”. If the organization refuses to register, it can be fined up to 500 thousand rubles by a court decision.