Drive a predator. To the shame of the F-22 "Raptor" 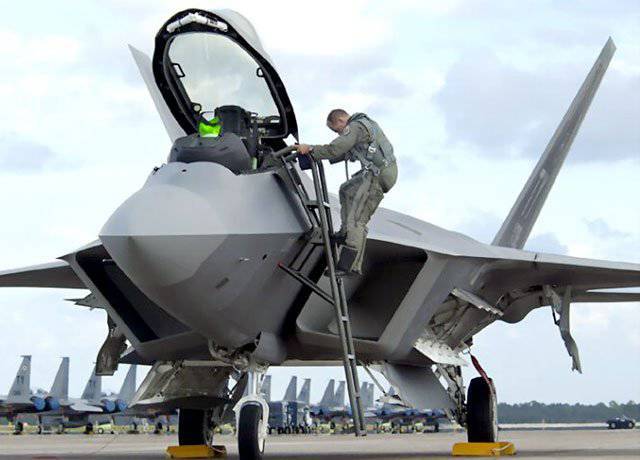 Recently a very interesting video appeared on the network. It captures a training air battle between the French Rafale fighter and the American X-NUMX fighter of the F-5 Raptor generation. And oddly enough, in this training match the pilot of the American fighter (who is considered the best fighter to achieve air superiority) turns out to be a bit! And not just once, but with the 22: 4 score in favor of the French in a series of five training battles!

Training fights took place in 2009 in the sky of the UAE as part of a training program for pilots aviation NATO and NATO partner countries - ATLC (Advanced Tactical Leadership Course - advanced tactical leadership). And it’s no coincidence that the video made a lot of noise on the network. F-22 is still considered an unsurpassed air fighter, with which it is simply useless to compete with fighters belonging to previous generations. In addition, the Americans until recently hushed up the results of these battles, talking about other training fights in the sky of the UAE. And after the appearance of the video, they began to clumsily make excuses, claiming that the F-22 had suspended fuel tanks (PTBs) that worsened the maneuverability of the aircraft and its radar visibility. But in the video shot from the cockpit of the French fighter, no PTBs are seen on the Reptor. It is clear why the Americans preferred to keep silent about such a “click on the nose” - and even deceive the public, while retaining the “Reptor” status of an invincible fighter.

However, do not underestimate the F-22. The video did not appear on the network by chance, and most likely is a kind of advertisement for the French car in the hope of export contracts. Yes, "Raptor" confounded, but not at all in the role in which it can be seen in real air combat. Training battles in the skies of the United Arab Emirates took place over a short distance and according to a scenario different from the tactics of F-22.

The Americans do not intend to let the Raptor into close combat, let alone one-on-one. They prefer to use it as an interceptor at medium and long ranges, where F-22 units, using aerial reconnaissance data from control aircraft (E-3 Sentry or Boeing 737 AEW & C), must “shoot” the enemy from a long range. This is due to the fact that the F-22 is very expensive and embodies the prestige of the US Air Force and their "invincible" image. Losing an F-22 in action would destroy the notion of American military aviation as the best and most advanced in the world. Therefore, the Raptor will never be allowed into close combat, where much depends on the skill of the pilot and "military luck", and not on the perfection of technology. In real combat, the Raptors will operate in a passive mode of their radars and will evade close proximity to the enemy. So that the symbol of American superiority is not accidentally shot down.

But at medium and long range - F-22 remains a very serious opponent. It has reduced visibility in some ranges of radio waves and in the infrared part of the optical spectrum. This makes it difficult not so much to detect it as to confidently seize this goal. weapons. It is capable of approaching the target of an attack at supersonic cruising speed, which reduces its time in the range of ground-based air defense systems and allows it to “escape” from enemy fighters. He has very sophisticated means of communication and an onboard reconnaissance-strike complex, which allows him to work on targets without his own unmasking radiation (in a passive mode). All this gives the F-22 advantages, but makes it only an element of American air reconnaissance and strike systems. An element with a fairly narrow function, but effective within the framework of the effectiveness of the complex itself. Separated from aerial reconnaissance and control assets, the Raptor loses a significant part of its advantages.

What should be interesting for us in this leak?

First, the fact that the “Raptor” can be beaten even by planes that are at least half a generation behind. True, in order to confidently beat him, it is required to deprive him of certain advantages. First of all, the remaining elements of the airborne reconnaissance and strike complex: long-range radar detection and control aircraft (airborne early warning systems, often called Avaksami), as well as communications and data exchange with external sources. Here, electronic warfare (EW) and long-range air defense systems are of particular importance. At present, domestic EW and air defense weapons are sufficiently effective to counter US air complexes. It is only necessary to saturate the armed forces with them in the required volume.

In addition, the domestic Air Force has large-radius air-to-air missiles that exceed all Western counterparts in range: the R-37, the RBB-BD, the KS-172 and some other designs. It is difficult to talk about their effectiveness at a large distance against F-22, with reduced radar visibility. But the control planes for these missiles are a wonderful target, actively radiating and perfectly emitted against the background of interference. And without them, F-22 loses most of its advantages.

Secondly, the air combat recording leaves no stone unturned in the statements of the Americans about the "super-maneuverability" of F-22. The French "Rafale" during the battle is practically glued and hangs on the tail of the "Raptor". And the pilot "Raptor" can not do anything about it. Of course, the French pilot has to maneuver quite actively - the soundtrack gives a good idea of ​​the overloads. Nevertheless, the flight characteristics of the French car are head and shoulders higher than that of the American “fabulously maneuverable” F-22. This means that in close combat, domestic fighters, which have always been famous for their unsurpassed maneuverability, will not leave Chances to the Raptor. And the main thing for our pilots will be to reach the close range of the battle, using the means of protection and maneuver to disrupt the F-22 attack from a long distance. This should be considered in the training of pilots.

Thirdly, the statements of Americans about the "invisibility" of F-22, which were already put under great doubt, are now clearly debunked. The French “Rafale” repeatedly and confidently captures and accompanies the “Raptor” with its onboard sighting system. At least at close range. And although on the frames it can be seen how several times the radar of a French car loses F-22 tracking, but the full optical system helps to keep track of it even when leaving the Rafale front hemisphere. It is worth noting that the optoelectronic sighting systems complement the radar systems on all domestic fighters, even the 4 generation. And if, actively maneuvering or being at an angle that is inconvenient for irradiation, the “Raptor” can disrupt the capture and tracking, then the optical radar systems completely cope with it.

Ctrl Enter
Noticed oshЫbku Highlight text and press. Ctrl + Enter
We are
According to forecasts, the leaders will be F-35PAK FA vs F-22
Military Reviewin Yandex News
Military Reviewin Google News
68 comments
Information
Dear reader, to leave comments on the publication, you must to register.