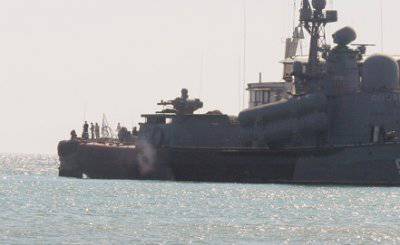 The ships of the Iranian naval forces, who arrived for the first time on an unofficial visit to Russia, passed under a drawbridge across the Volga and headed down the river to the port of Astrakhan. As ITAR-TASS was told today by the press service of the Southern Military District / JUVO /, for the Iranian Navy detachment consisting of two Peykan and Dushan missile boats, the railway bridges across the Volga were lit. "In order for the ships to go further, it is necessary that part of the bridge be raised," the press service said.


After that, the ships of the Iranian Navy embarked on a raid on the Volga River. It is expected that at 08.00 Moscow time, ships will moor near the monument to Peter the Great. Accompanying Iranian sailors with the latest Caspian ship flotilla - a small artillery ship "Volgodonsk", which met guests back in the Caspian Sea.

"The solemn meeting of Iranian ships will be held to the sounds of the national anthems of the two countries on Peter the Great Square. Official guests of the Caspian Flotilla and the administration of the Astrakhan region will greet the guests," the spokesman for the Southern Military District said.

Iranian sailors will stay in Astrakhan until July 1. There will be meetings of the detachment command with the command of the Caspian flotilla and the leadership of the Astrakhan region. Iranians will visit the Caspian Flotilla Naval Museum, the Museum of Military Glory, and the ship "Volgodonsk". Crews of the Russian ships will visit the Iranian ships. A friendly football match and a tug-of-war competition between the team of the Caspian Flotilla and the Iranian military will take place on Sunday.