28 2013 June
10
The author of the famous AK Mikhail Kalashnikov began his armory career back in 1942 with the creation of a very interesting submachine gun.


The 20th century will remain in the memory of mankind as the century of two world wars in which dozens of countries were involved. These conflicts have become a powerful impetus for the development of military weapons. And if at the beginning of the 20th century, for example, small arms were represented by revolvers and rifles, then after 15 years (the beginning of the First World War) armies were armed with not only revolvers and rifles, but also machine guns, and machine guns appeared as individual weapons and submachine guns.

The experience of the First World War, and in Russia and the experience of the Civil War, led to the fact that in the 1920-1930-s. the need for further improvement of small arms and the creation of fundamentally new models of them became obvious. Special attention was paid to equipping the troops with automatic weapons: machine guns and machine pistols. The most widespread are the last.

Submachine guns, as a new type of small arms, appeared during the First World War and served as a special weapon for positional forces. But subsequently, the high fire power of this weapon, combined with the simplicity of its design, led to a revision of the place of the submachine gun in the composition of the small arms of the armies. He became an individual infantry weapon.

The world's first submachine gun was developed by the Italian company Villar Peroso, but the German MP18 is considered to be the ancestor of the family of submachine guns.

Designer MP18, Hugo Schmeisser, began developing a sample chambered for 9-mm Parabellum in 1916, and in 1918, the specimen entered into service with the German forces called Maschinenpistole MP18 (1918 is the year of adoption). The submachine gun was armed with units of the Western Front, but it didn’t cause much enthusiasm among the servicemen. The reason for this was that the place of this type of weapon at that time was not clearly defined.

As already noted, MP18 served as the basis for creating submachine guns in other countries, including in the Soviet Union. Our development of such weapons began in the 20. XX century.

The first model adopted by the Red Army, was 7,62-mm submachine gun arr. 1934, designed by V.A. Degtyarev (PPD). Its automation works on the principle of using the recoil energy of a free gate. In 1940, a modernized version of the PPD-34, called the 7,62-mm submachine gun of the 1940 model of the Degtyaryov system, the PPD-40 index, was adopted. 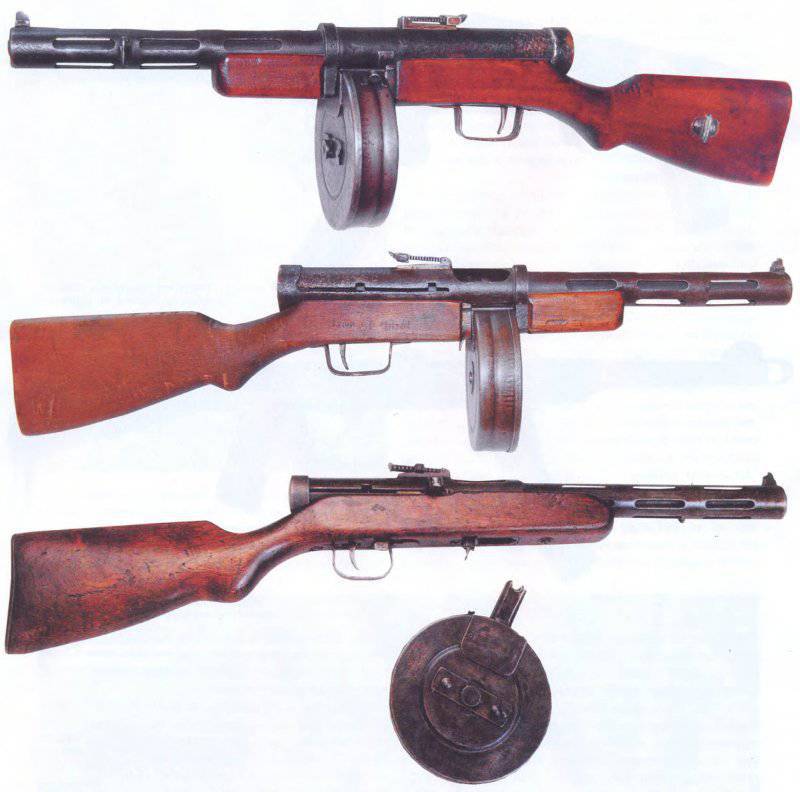 Shooting could be carried out both in bursts and single shots. The shutter was provided with a shock absorber. Muzzle brake compensator increased the stability of the weapon when shooting and accuracy.

In 1943, one more submachine gun appeared in the army, which received the highest rating of the Red Army soldiers during operation - this is an 7,62-mm submachine gun of the 1943 type, designed by A.I. Sudaeva PPS-43. The fighters appreciated the PPS-43 for their high combat and operational qualities. In the PPS-43 automation, the energy of the free gate was used. Shooting could be conducted only in queues. The weapon had a two-row sector shop. According to the combat parameters, PPS-43 was approximately equal to PPD-40 and PPSH-41, but it was more compact and technological, it had less weight. For the manufacture of PPS-43, it took three times less time and two times less metal than for the production of very high-tech PCA-41. Due to this, the release of PPS-43 was organized at enterprises that never produced weapons.

The Great Patriotic War forced to mobilize all the forces of the Soviet people to repel the aggressor. And it would seem that the main focus should be on the production of weapons for the front, for the Red Army, that there is simply no power to develop new models. But, surprisingly, during the war, when the victory was still far away, intensive development of fundamentally new types of weapons continued in the country. So, Tula S.A. Korovin creates the first in the USSR model of automatic weapons, made according to the bullpup scheme. Currently, the only copy of this weapon is in the Military Artillery Museum of the engineering and communications troops (St. Petersburg). 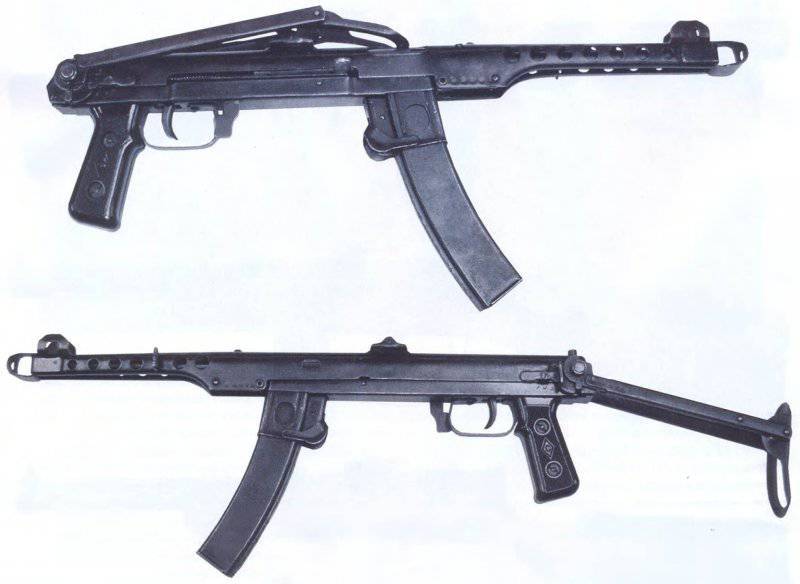 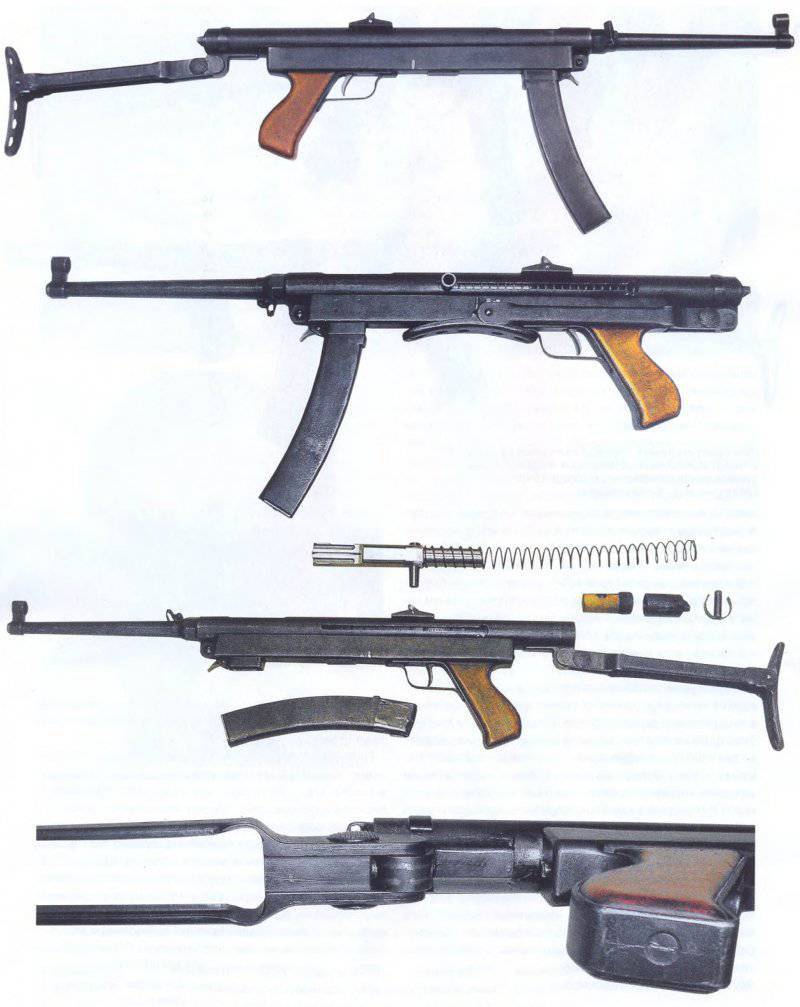 During the war years, the department of inventions of the Art Committee of the Main Artillery Directorate (GAU) was engaged in registration and consideration of proposals in the field of small arms. Here, of course, did all the proposals for submachine guns.

At this time, the design talent of a man who will become world famous in the near future began to take shape. This man's name was Mikhail Timofeevich Kalashnikov. At the end of 1942, he submits to the Art Committee a proposal for a new submachine gun with a semi-free locking and an independent percussion mechanism under the standard TT pistol cartridge (the proposal was registered in case No. XXUMX of 7743 G.)

It was the second sample, and the first sample created earlier used automation on the principle of a free gate.

Creating a semi-free pistol submachine gun, MT Kalashnikov sought to develop light, maneuverable semi-automatic weapons. The model was supposed to surpass in its fighting qualities the submachine guns that had already been adopted. This determined the use of semi-

bodyshield, which could reduce the mass of weapons and provide a relatively low rate of fire.

Submachine gun design M.T. Kalashnikov has a folding metal butt, folding down, a sector magazine on 30 cartridges and a pistol grip. The handle for the left hand is placed in front of the store. The barrel is protected by a casing. Handles are made of wood. The sample was developed for a pistol cartridge of the 1930 model. 7 TT, 62x25 mm, provided a target range of 500 m, had a total length of 750 mm (with a butt folded - 535 mm) with a barrel length - 250 mm, the mass of the pistol-machine gun with an unopened - 2,8 kg (for other sources - 2,9 kg), magazine capacity - 30 cartridges. 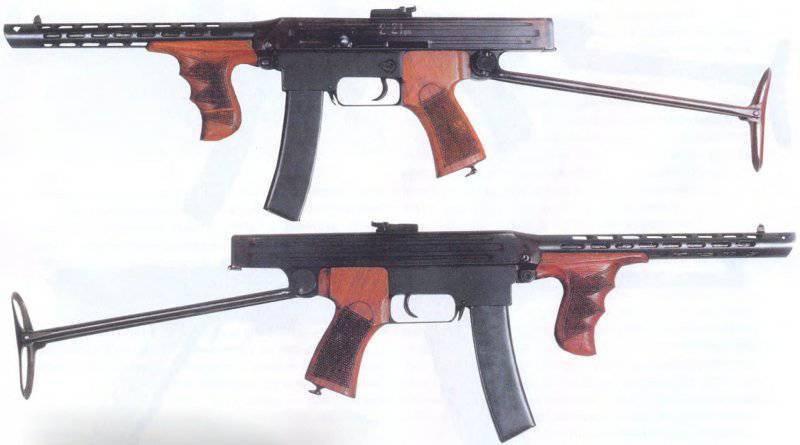 Interesting is not quite normal for submachine guns automatic with a semi-free shutter. After the shot, the frame of the bolt under the action of recoil moves back and moves the coupling connected to the skeleton of the bolt on a rectangular thread. The clutch with the backbone of the gate, moving backward, is screwed onto a special fixed tube, which is mounted at the end of the receiver and makes a complex movement (translational + rotational). In the process of firing, the clutch, moving progressively and rotating along a spiral tube, compresses the return spring and leaves the back of the bolt. The consequence of this complex movement of the coupling, due to the friction of the coupling on the stationary spiral tube and the internal rifled part of the gate, is a decrease in the rate of rollback of the gate.

Trigger mechanism of a submachine gun MT Kalashnikov allowed single and automatic fire and was equipped with an independent drummer. In the process of firing when the mobile system rolls back to the extreme rear position, the clutch “pulled off” the drummer by about 14 mm, and the whisper in the gate under the action of the spring went down and turned against the combat platoon of the drummer. When rolling in the moving system, the coupling entered from the hammer rim on the 12 mm, and the drummer stopped on the sear.

The trigger was simple in design. When you press the trigger with the help of a transmission lever system, he raised the sear up and released the drummer, who, under the influence of the returning spring, impaled the cartridge cap.

With automatic shooting, the sear, when the shutter was in the extreme forward position, was pulled down by the trigger lever, and a shot occurred.

Original was the design of the cleaning rod with a rubbing, which is made in the form of three telescopic tubes on the thread. When folded, the ramrod was screwed into the pistol grip.

The examination of the department of inventions of the Art Committee of the USSR GAU conducted a thorough analysis of the design of the M.T. Kalashnikov and subjected him to fire tests. The originality of the design was noted. However, "... the author failed to achieve a significant reduction in the rate of shooting and increase of accuracy ..." (compared with the machine guns, which are in service with the Red Army). Although the submachine gun M.T. Kalashnikov had a small mass and size, he was not accepted for service "... because of its production complexity, which was a significant drawback for such a massive weapon as a submachine gun."

But the most important thing that gave these weapons to Mikhail Kalashnikov was the invaluable experience in designing small arms, which he later successfully used to create the world-famous series of AK machines. 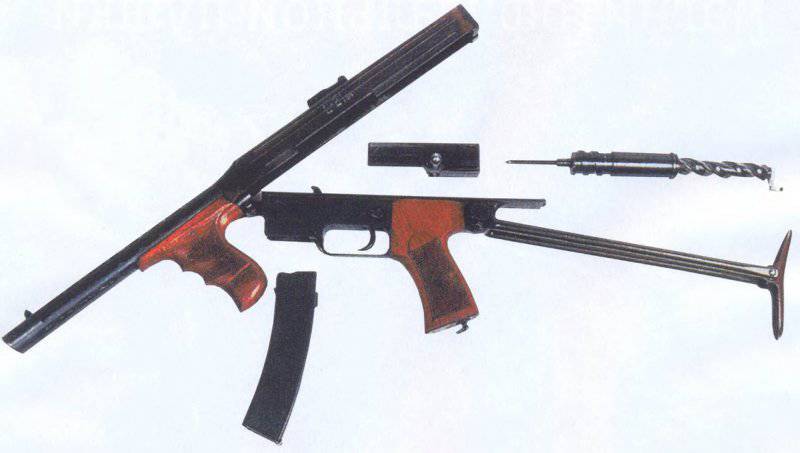 Ctrl Enter
Noticed oshЫbku Highlight text and press. Ctrl + Enter
We are
Revolvers of the Wild WestRussian revolvers
10 comments
Information
Dear reader, to leave comments on the publication, you must to register.