"Night hunter" from Torzhok. Secrets of the new Mi-28N 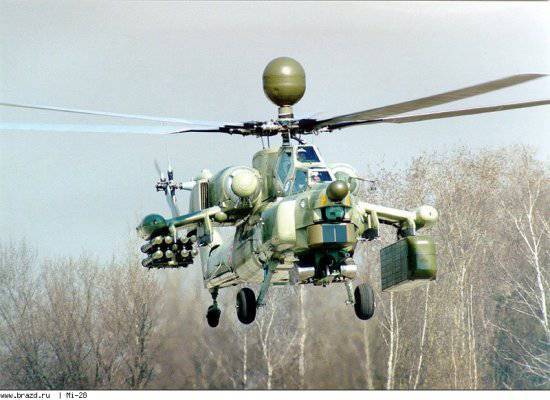 Fight at any time of the day and regardless of weather conditions, easily hitting targets at maximum range, while remaining inaccessible for enemy weapons. All these fighting qualities are being implemented today in the new Russian attack helicopter Mi-28H "Night Hunter" (according to the NATO Havoc - Ravager classification). Izvestia decided to find out how Russian pilots master the “hunter”. At the headquarters of the Air Force our request was answered: "Go to Torzhok and look."

The once quiet merchant Torzhok for our army is a legendary place. Here is one of the centers of combat use aviationin which pilots of helicopter squadrons improve their skills. Pilots who have fought in Tajikistan, Chechnya, Sudan, Chad, and Sierra Leone are taught not only how to fly rotorcraft in the most permissible modes, but also how to use them competently. Today, the center trains pilots of the Night Hunters.

Mi-8 at maximum speed "goes", dangling after the riverbed. Judging by the instruments, we are only three meters high, and although the cabin of the helicopter, in which we are sitting with Major Rustam Maydanov, is just a simulator and our flight is virtual, every now and then the head starts turning in turns. Immersion in reality is complete. The Mi-28H simulators are not in the center yet, so we are circling on the Mi-8. Having turned for the next mountain ledge, we jump out onto the bridge. The control stick goes slightly towards itself, and the helicopter easily jumps over an obstacle, immediately gaining a few tens of meters of height. Handle away from us - and we steeply go down to the water.

- Where are we flying? - blocking the noise of the engine, I ask the pilot.

“Imereti Bay, Sochi,” Rustam shouts, not looking up from the control. - At first, our guys all strove to fly along the coast, to look at the sanatoriums in which they rested. Did not draw ...

- Not. In its place only the mountains.

“They tried,” he smiles, “for Psou (the river separating Russia from Abkhazia. -“ Izvestia ”) again Sochi begins ... and the sea cannot reach it, it is infinite.

In confirmation of these words, Rustam turns the helicopter from the mountains to the sea, and we unexpectedly jump out onto the aircraft-carrying cruiser Admiral Kuznetsov off the coast. We fly closer to him, and, so that I can better examine the aircraft carrier, the pilot makes a spectacular turn over his deck, almost hitting the screws behind the “parked” Su-33. It cost. And we again go to the mountains to shoot at targets.

“The Mi-28H is a very squat car,” says Colonel Andrei Popov, head of the combat training center, sharing his impressions of the new helicopter.

He has Tajikistan behind him, the second Chechen campaign and Sierra Leone, where he flew the strike Mi-24. Now I scored more than 200 hours on the new Mi-28H.

- Only on it you can make a turn in 70 degrees, slide or dive at 60 degrees. And all this millimeter changes the position of the control knob. The machine is very sensitive and at the same time resistant to side wind. On Mi-24 all this was not, - says Popov.

Mi-28N began to develop as early as the 80s of the last century as our response to the American AH-64 Longbow Apache. However, due to political and economic troubles, this car hit the troops only in 2006 year. Since 2008-th began its development of pilot-instructors in Torzhok. In 2010, the army received a full-fledged Night Squadron squadron. Now the second is being formed. In Torzhok, the truly hot days: military exercises with the participation of Mi-28Н are replaced by training flights, classes on computer simulators alternate with "paper work". Colonel Popov’s desk is literally littered with notes and notes.

“The tester teaches the helicopter to fly,” says the colonel. - We - to fight. Our task is to turn all this into combat instructions for other pilots.

“Previously, we considered Mi-28H capricious machines,” he reasons, because they did not know how to exploit them. - Now we are sure that there is no more perfect helicopter.

“But after all, one of your Mi-28Ns fell in the last year during exercises at the Gorokhovetsky training ground during practical shooting with high-precision missiles,” I’m trying to catch the colonel. - They say that the powder gas left by rockets hit the engines ...

“A helicopter, like a child, is constantly growing,” Popov replies philosophically. - The active operation of the Mi-28H of course reveals some shortcomings. And it is very good that the industry is very sensitive to our proposals. Every six months something changes in the helicopter, new equipment and equipment appear.

Of course, I knew that Andrei Popov was in that fallen helicopter. Only thanks to the design of the machine - the shock-absorbing chassis and the capsule in which there are pilots capable of withstanding the overload in 15 g - they were able to survive after the fall. As the colonel said, the pilots then got out of the emergency vehicle, even without bruises. About why the accident occurred, said nothing. Probably, the helicopter is really growing like a child, and you should not delve into the problems of growing up already passed. Moreover, the episode that led to the accident is a kind of “proprietary method” of the Mi-28H: the car hangs at a low altitude and firing from all kinds weapons on the enemy.

“From the point of view of day piloting, we didn’t invent anything fundamentally new compared to, say, the Mi-24,” says Andrei Popov. “But here the nightly use of the Mi-28H is truly new in our combat tactics. Before the Mi-28H, not a single helicopter could independently conduct full-fledged night-time combat operations.

According to him, the main task of the “Night Hunter” is to hover at a low altitude (“somewhere behind a fishing line”) and wait for target designation from ground units. Being at this time outside the zone of direct hostilities. Received a "tip" on the target - jumped out of the ambush, made a launch of high-precision missiles and again went into cover. All maneuvers at speeds up to 324 km per hour and at altitudes from five to 150 meters.

“The experience of modern military conflicts has shown that the helicopter has only 10 seconds to attack the target,” says Popov. - Then he will be surely shot down, despite the serious booking of the car. The onboard equipment Mi-28H guarantees the performance of a combat mission. At the same time, I don’t have to find and classify the goal myself. Her coordinates will be given to me from the ground or another helicopter. I just need to make a maneuver and shoot, - said Colonel Popov.

When you look at the Mi-28H outside and you see the big screws that fastened the car's casing, you immediately understand that it was created more than a dozen years ago. Modern planes and helicopters do not "rivet" that much. The modernity of the Mi-28H is, of course, inside: liquid crystal displays, radar stations and computers that perform most of the complex work. All this makes the Mi-28H the only helicopter in the world capable of both manual and automatic flying at a height of five meters with rounding of the terrain during the day and night, in adverse weather conditions.

“Many automated operations,” explains Popov. - I just need to put a "marker" on the display showing the target. The computer itself will calculate the distance to it, make corrections for the wind, the weather, lay the optimal route for reaching the target, taking into account the terrain.

For this it is responsible multifunctional radar "Crossbow". The station automatically warns of obstacles: detached trees and wires of power lines. As the pilots say, the "Crossbow" sees even a separate person at night at a distance of 500 meters, and looks at the terrain for several tens of kilometers. During the night flight, the pilot can use night-vision goggles and an aerobatic thermal station, which additionally give a picture in the dark both in the course of the vehicle’s flight and in the direction of the pilot’s head turning.

“At the Zapad-2009 exercises,” recalls the pilot, “we had to work in the rain and heavy smoke from the targets. Direct visibility did not exceed 1,5 km. But with the help of TV and teplokamer we were able to detect them at distances in 3 km and hit with guided missiles. On the Mi-24 this would be impossible. From it they shoot only at targets in direct visibility.

Flying in night-vision goggles for Russian helicopter pilots is a new thing. Actually they make the possibility of covert night use of the Mi-28H the main trump card of the car. As Popov says, today they are learning not only to hunt at night, but also work out the task of evacuating the wounded from the front line. In a very compact machine there is a small compartment in which, if necessary, you can transport a person.

- How to ensure secrecy when the engines of the car roar enough? - I ask the pilot.

“The helicopter is arranged in such a way that as long as you do not see it,” he explains, “it is absolutely impossible to understand which side it is in.” And here it is just very important that we can approach the goal, hiding behind the folds of the terrain. Until the last remaining invisible to the enemy.

In modern war, as experts say, it’s not the quantity that decides, but the quality of the weapons. Judging by how they learn to use the Mi-28H in Torzhok, this is exactly the case. In any case, the Russian Air Force received one of the most modern helicopters in the world.